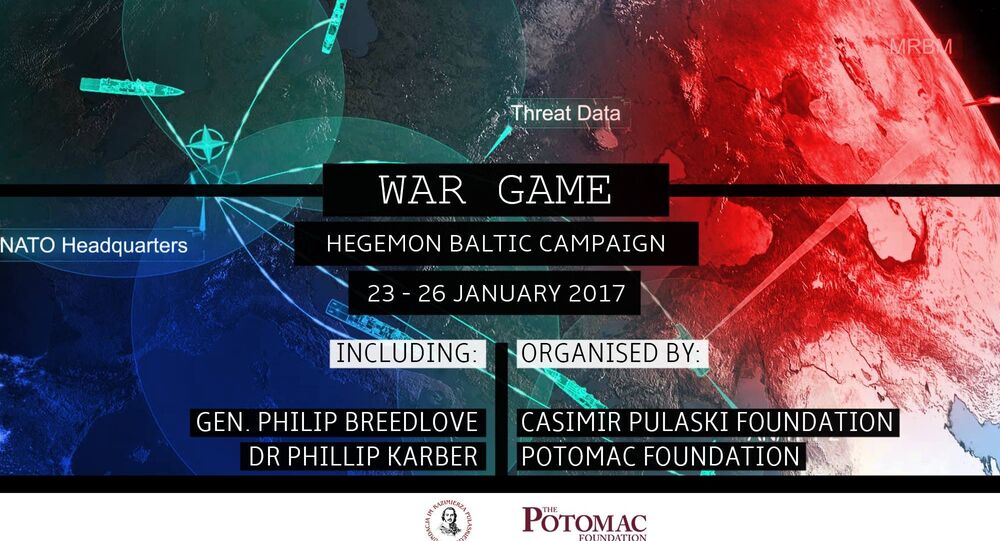 Last week, analysts and military officials flocked to Warsaw National Stadium, where they conducted a detailed computer simulation of full-scale war between NATO and Russia in Europe. Speaking to Sputnik about the event, political scientist Adam Wielomski warned that endless simulations and recriminations could result in a real war breaking out.

© Sputnik / V. Kiselev
Think Tanks Stage Massive Computer Simulation of War With Russia in Warsaw
The games simulated a hypothetical Russian attack on the Baltic states, and featured a who's-who of anti-Russian officials, including former NATO Forces in Europe commander Philip Breedlove, known for his remark that Russia posed an 'existential threat' to the US.

Speaking to Sputnik Poland about the war games, Adam Wielomski, political science professor and deputy editor in chief of the Konservwatyzm.pl political portal, explained that for Poland, the greatest danger of staging such games is that they may become a self-fulfilling prophecy.

"Sometimes in politics it happens that there is no real issue behind a conflict or dispute," Wielomski noted. "Nevertheless, both sides feel threatened, and thus become keen to put forward mutual recriminations against one another, to improve security and their [military] strength against the other side. This, in turn, results in a reaction from the other side, and this is the essence of the self-perpetuating conflict."

"Four days of simulation, projection and strategy in real time. The #WarGameFKP has begun!"

The political scientist suggested that he finds himself "under the impression that this kind of self-perpetuating conflict is what we are dealing with in the relationship between the West and Russia. And the worst prospect for me, as a Pole, is the idea that, God forbid, these recriminations and attempts by both sides to ensure their own security result in an armed conflict, because it, unfortunately, would take place on Polish territory."

Accordingly, Wielomski stressed that "Poland must do everything in its power to avoid the escalation of the tensions from both sides."

Unfortunately, the professor recalled, the policy of the current government in Warsaw considers that security can be assured by focusing almost exclusively on the 'Russian threat'. This, he said, leads the country's leaders to try to emphasize NATO's interest in Poland's defense, hence the exercises of the kind held in Warsaw this week.

© AFP 2020 / BARTOSZ SIEDLIK
'For Poland to Be Truly Independent, It Must Kick NATO Out' – Ex-Lawmaker
On Friday, US Ambassador to Poland Paul Jones was asked, indirectly, about the significance of the war games by the Polish newspaper Rzeczpospolita. The diplomat cautiously explained that Russia is "a large and important country that plays a key role in both the global and the US security system," adding that President Donald Trump has indicated that "if there are any areas of cooperation with Russia, this must be assessed positively."

Asked what he thought of the ambassador's remarks, and their contrast to the narrative of the war games, Wielomski explained that "what we are now dealing with is two equally-matched currents. The 'plot', figuratively speaking, that was played out at the war games, was a plot from the Obama era. Most likely, the simulation took place according to a scenario created by the previous administration, which believed that Russia poses a serious threat to the US and NATO, and therefore must be prepared for a possible attack or to repel a pre-emptive strike."

"The statement by the ambassador, on the other hand, seems to reflect more the new position of US diplomacy, which arrived together with Trump, and which seems much more interested in finding equilibrium and creating a balance of power in the world." Diplomats, Wielomski  noted, "are the quickest to read the signals coming out of the White House. In fact they probably get these signals direct from Washington, whereas the military receives them much later."

© Sputnik / ALEXEY DRUZHININ
Historic Moment: What to Expect From the First Official Phone Call Between Putin and Trump
On Saturday, Presidents Putin and Trump are expected to hold their first telephone conversation since Trump's inauguration. Asked about what he expects to emerge from the talks, Wielomski said that this first conversation is likely to be only a "courtesy call," and will not be any kind of watershed event.

Instead, he said, "I would imagine that the two presidents will agree on the need to meet in person on some neutral territory, in order to discuss the international situation, the need to change the 'Cold War lite' policy that the two countries are now engaged in, and to discuss the prospects and opportunities for cooperation."

Ultimately, "if the result of the talks is an agreement on a summit meeting of the two presidents, this is something I would like to see happen," Wielomski concluded.