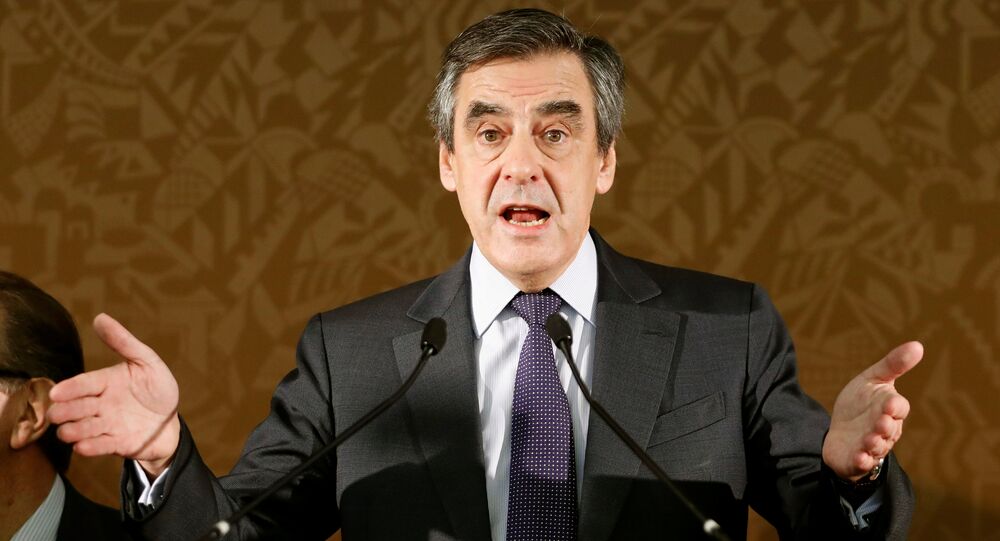 Francois Fillon's win in the presidential primary has caught the French establishment off guard. While Fillon's foreign policy aimed at normalizing relations with Russia have received praise from the French public, his tough Thatcherian economic strategy may alienate some of his voters, French journalist Christine Bierre told Sputnik.

Fillon won the presidential nomination Sunday becoming the Republicains' candidate for the 2017 election.

In an interview with Sputnik Christine Bierre shed light on the ongoing presidential campaign in France, strengths and weaknesses of its favorites.

Fillon Likely to Lift Anti-Russian Sanctions if He Wins

"François Fillon's foreign policies would be a break with those of François Hollande, which have been, with very few exceptions, practically dictated by Obama and his British allies. A regular participant to the Valdai Club meetings and favorable to a healthy, if not uncritical collaboration, with Vladimir Putin, Fillon announced already he will act to lift the sanctions against Russia and collaborate with President Putin to re-establish stability in Syria with president Bashar al-Assad and eliminate ISIS [Daesh]," Bierre emphasized.

© REUTERS / Philippe Wojazer
Victory for Fillon in Presidential Primary Marks Earthquake in French Politics
At the same time, Fillon's economic policies "will not make it easy for him to win," the journalist pointed out.

The crux of the matter is that Fillon, dubbed by The Telegraph as "the first truly Thatcherite leader of the Right," is pushing ahead with radical economic reforms.

"Fillon wants to eliminate 500,000 public jobs during his tenure! No less than 10 percent of all public workers. He will reduce the 'social' charges paid by companies (covering for costs of unemployment, retirement, public health insurance, social security, etc.), by 50 billion and scrap the tax on large fortunes (ISF) and the 75 percent tax on revenues exceeding one million euros, and extend retirement age to 65 years," Bierre highlighted.

These tough policies will undoubtedly provoke an upsurge on the part of left-wing forces, playing into the Socialist Party's hands, the journalist noted.

"Whether he will be able to rally a majority of the country to those ultra-liberal policies with his present policies is yet to be seen…" she said.

Following Fillon's win in the primary observers envision a bitter battle between the French Republicains candidate and Marine Le Pen of the National Front. What are Fillon and Le Pen's strengths and weaknesses?

"Their strength from the standpoint of world politics, is that they both want peace with Russia and a France which recovers its traditional independence from the Western powers, Bierre emphasized.

"Their weakness is that neither has the economic policies to break France loose from the Western oligarchy, i.e. the top financial powers operating out of Wall Street and the City of London, which define the policies of the West, including its hawkish attitude against Russia," she stressed.

© REUTERS / Thomas Samson
Fillon's Clean Political, Criminal Records 'Nightmare' for Le Pen
The journalist highlighted that neither Fillon, nor Le Pen is calling for a financial reform which will bring an end to pumping trillions of euros into "Too big to fail" banks since the 2008 crisis.

"Deutsche bank is virtually bankrupt, the Italian banking sector, according to the Italian government, has 200 to 400 billion euros of bad loans," the journalist pointed out, warning that the implosion of the West's financial system is just round the corner.

"So long as this is not solved, no President elect will be able to do anything, because those banks are unable to lend for investment, and totally dependent on liquidity injections (quantitative easing), in the trillions of euros, from the European Central Bank (ECB), monthly or yearly, which they use strictly for speculation, in order to survive," Bierre observed.

In contrast to Fillon and Le Pen, Jacques Cheminade, the Solidarité & Progrès party's presidential candidate, calls for "for a strict separation between useful banks (deposits and credit to the economy) and investment banks (speculation)," she emphasized drawing parallels between Cheminade's concept and the US' Glass-Steagall Act.

For his part, Fillon "wants to change the orientations of the ECB from its current function — which is only to fight against inflation — to being a Bank promoting investment in productive activities. This amounts to try to cook a new soup with the same ingredients," she elaborated.

"M. Fillon does not say it, but all this requires a complete overhaul of different treaties going back to the 'Maastricht Treaty' (1992) which set up the ECB as an autonomous bank with only one responsibility: ensuring the stability of the currency," the French journalist continued.

"The statutes of the ECB explicitly forbid it from extending loans to governments for investment in infrastructure or whatever other needs," she highlighted.

Meanwhile, Marine Le Pen promised that she will organize a referendum on whether to remain in the EU. However, "her proposals for a follow-up are totally unfounded," Bierre believes.

"[Le Pen's] economic and financial plan for the 2012 presidential elections which is still valid, proposed to go back to the French Franc, and called for the Banque de France to issue the equivalent of 100 billion francs debt per year, of which 90 percent would go to in advance down payment of the totality of the French debt, and only 10 percent to new investment projects!" the French journalist noted.

"During that period the same policy of 'fiscal rigor' which we have now, would apply to French citizens," Bierre warns.

For his part, Cheminade proposes to re-establish Europe's original central banks and return to their original currencies, while keeping the euro as a common currency.

He is calling "for pulling out of the Euro and of the EU treaty (1992 — 2017), and rebuilding Europe around the core nations that founded Europe," the journalist emphasized highlighting the importance of European nations taking over control of their monetary policies.

"In order to free themselves from the grip of the Western predatory financial centers, France and Europe, says M. Cheminade, should orient towards the BRICS and support the strong dynamic created by China and Russia in particular, in the last years, to create the credit institutions of a new world economic order (AIIB, NDB, Silk Road funds, etc.)," Bierre stressed.

"His approach, if compared to that of Russian economists, is based 'on the issuance of public credit for research and industrial development, of the type promoted by [Russian economist] Sergei Glaziev,'" the French journalist underscored.