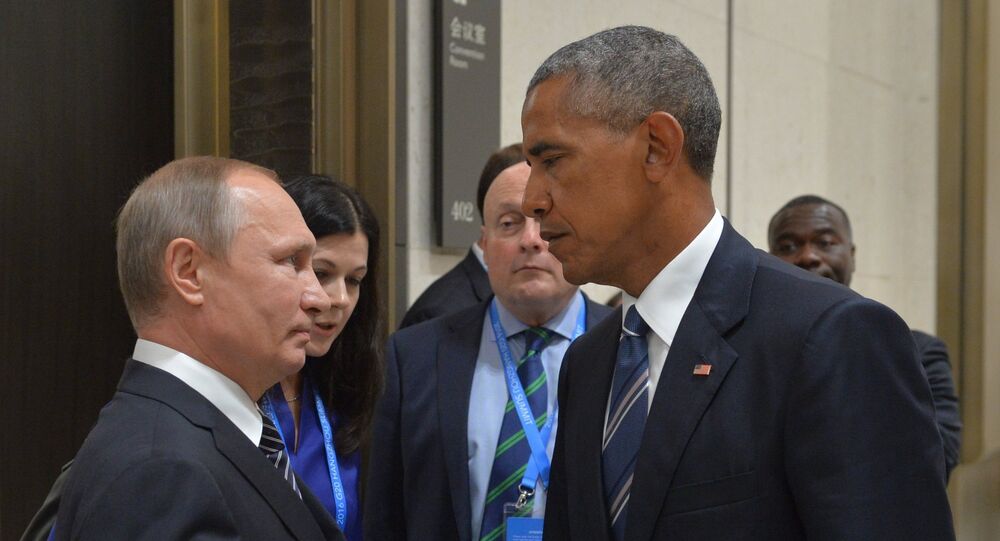 Amid the reports that Russia and the US have failed to bridge the differences on the Syrian issue at the bilateral talks on the sidelines of the G-20 Summit in Hangzhou, China, Reuters has revealed the details of a possible deal on the resolution of the ongoing conflict.

© Flickr / Devar
G20 Leaders Reaffirm Commitment to Fight Terrorism in All its Forms
President Putin has met with his US counterpart on the sidelines of the September 4-5 G20 Summit in the Chinese city of Hangzhou on Monday.

"The meeting was longer than planned," Peskov told reporters after the meeting, adding that it lasted over one hour.

"Syria was first and foremost discussed, and Ukraine. After that Obama and Putin talked one-on-one," he added, noting that the meeting went well.

"Work will continue," the spokesman said.

​​Also on Monday, Russia’s Foreign Minister Sergei Lavrov and US Secretary of State John Kerry continued their talks on the sidelines of the international summit.

​"The discussion continued on cooperation mechanisms between our countries, in order to eliminate terrorists on Syrian territory; this should help develop a political solution to the conflict in Syria, which has lasted for many years," Russia's Foreign Ministry said in a statement.

© Sputnik / Ilya Pitalev
Lavrov, Kerry Discuss Steps to Resolve Syrian Conflict, Including Truce - Moscow
The two politicians discussed other international issues as well, including the conflicts in Ukraine and Yemen, the situation on the Korean peninsula and the settlement of the Israeli-Palestinian issue.

On Sunday, the US Secretary of State made a statement after the talks with Russia’s Foreign Minister Lavrov, saying that the two diplomats have not reached any agreement on the Syrian crisis and agreed to meet on Monday to continue the discussion.

Putin-Obama talks in #Hangzhou on sidelines of #G20. Leaders in the room, Lavrov and Kerry are in the corridor. pic.twitter.com/yPRY9iq73z

​Meanwhile Reuters says it has obtained a copy of a letter from Washington's Syria envoy, Michael Ratney, dated September 3, to the armed opposition, which lays out some of the ceasefire terms.

​“It would oblige Russia to prevent warplanes from bombing areas held by the mainstream opposition, require the withdrawal of Damascus's forces from a supply route north of Aleppo, and focus on the delivery of humanitarian aid, unhindered by warring sides, to the city's population,” the agency quotes the letter as saying.

© Sputnik / Aleksey Nikolskyi
Putin, Obama Meet on Sidelines of G20 Summit in Hangzhou, China
“In return, the United States would coordinate with Russia in fighting against al-Qaeda, it said, without elaborating,” the agency adds.

Meanwhile a source at the Russian Foreign Ministry told Russian media on Monday that there is no basis for any dramatic statements after Russia's Foreign Minister Sergei Lavrov and US Secretary of State John Kerry failed to strike a deal on Syria.

“The process will continue," he added.

G20 Leaders to Ratify Trade Facilitation Agreement by End of 2016