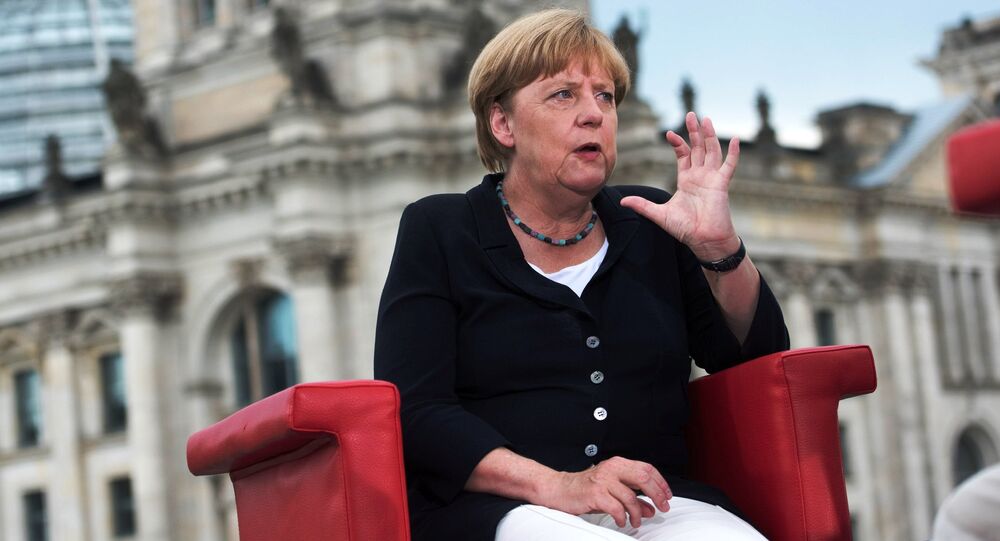 Merkel 'Has No Qualms About Squandering Germany's Political Legacy'

© AP Photo
Steinmeier Ready to Ignore Those Who Humiliate 'Russia-Understanders'
In the period from 1945 to 1990 it seemed that Germany could become a country that had learned a lesson from its previous arrogance and militarism, abandoning war as a political tool, German political scientist Jurgen Dittberner highlights, adding that German Chancellor Merkel has squandered the legacy of her political predecessors.

In his opinion piece for Handelsblatt, Dittberner takes a walk down memory lane to the times of Konrad Adenauer, the first post-WWII Chancellor of German Federal Republic.

Dittberner notes how Adenauer took every effort to consolidate Western Germany and boost its international image.

© REUTERS / Fabrizio Bensch/Files
Poll: 50% of Germans Oppose Fourth Term for Merkel Over Open-Door Migrant Policy
At the same time, the chancellor never tried to influence the policy of the USSR, the Russian Federation's predecessor, and maintained diplomatic relations with the Soviet Union, he remarks.

Adenauer's successors followed in his footsteps, restraining "militarism" and building bridges between Germany and Eastern European countries, which suffered a lot from the Nazi occupation of the 1940s.

They were reluctant to join the wars of the major global players  and focused mostly on Germany's domestic matters, the political scientist narrates.

Things changed drastically with the collapse of the USSR and the re-unification of Germany, Dittberner writes.

"Then the arrogance came. Germany was reunited, and Gerhard Schroder became a chancellor. Although he entered a war in Yugoslavia and engaged in Afghanistan, but when the Americans attacked Iraq, he refused to join them, together with the French. He was uncertain. What should be the role of the united Germany in the world? He regarded the Russian President Putin as a friend and Washington was alien to him," the political scientist writes.

In contrast, it seems that Chancellor Angela Merkel has neither doubts nor qualms, according to Dittberner.

Despite the fact that Merkel initially maintained good ties with the Kremlin, she has become one of the fiercest critics of Moscow after Crimea's reunification with the Russian Federation.

"Mrs. Merkel's heart beats for America, and she is one of the toughest critics of the Kremlin since the Crimean crisis," Dittberner stresses, adding that Merkel has even gone so far as attempting to influence Russia's policy.

© REUTERS / Kai Pfaffenbach
Will Germany's Next Chancellor Abandon Merkel's Hardline Euro-Atlanticist Stance?
"Adenauer had known, however, that this does not work," the political scientist underscores, "Germany and Russia have a long shared history. But Russia was the greater power of the two. It was St. Petersburg or Moscow who called the shots and not Berlin, and it is likely to remain that way. Has the Chancellor though this through?" Dittberner asks.

Alas, Germany's "Western integration" has transformed into the unquestioning obedience to Washington, according to the scientist.

It was German Chancellor Merkel who opened the door to the refugee crisis in Germany and paved the way for the emergence of right-wing populist parties like the Alternative for Germany (AfD).

In the eyes of the Chancellor, "Bundeswehr should become an intervention force. The more foreign missions it takes part in, the better," Dittberner remarks, bemoaning the fact that the "world without weapons" slogan is no longer relevant, because "war is allowed."

Indeed, during the Warsaw NATO Summit in July Berlin signaled its readiness to lead one of the four battalions which the Alliance is deploying in the Baltic region and in Poland — on Russia's doorstep.

Speaking at the German parliament on the eve of the Summit, Merkel claimed that "Russia's actions have deeply disturbed [Germany's] eastern allies" and pledged to protect NATO's Eastern European member states from Moscow, theLocal.de reported on July 7.

The German Chancellor's policies have triggered heavy criticism from both the CDU's opposition and Merkel's party members.

Deutsche Welle reports that half of those Germans polled oppose Merkel seeking a fourth consecutive term while 42 percent are in favor. The media outlet is referring to a survey published Sunday by German newspaper Bild am Sonntag.

To add insult to injury, the AfD is putting pressure on the ruling party, capitalizing on the failure of Merkel's "open door" policy toward Middle Eastern refugees.

It is believed that the Chancellor's refugee policy lies at the root of the current public discontent in Germany.

"The movement of people on the scale Mrs. Merkel has unleashed brings with it new social problems — and the risk of a domestic backlash," The Telegraph noted.

"An open-door migration policy is… politically self-defeating. Mrs. Merkel is deluded if she imagines Germany can sustain this pace of change," the media outlet added.

Russian political analyst Sergei Markov believes that Merkel's sanctions policy towards Russia may have been yet another trigger for the public dissatisfaction in Germany.

"Moscow remains a strategic partner for Berlin, and German business has always spoken out to the effect that the rupture in trade relations with Russia would inevitably lead Germany to disaster. In general, German public opinion does not consider Berlin to have a correct policy line in Ukraine, and considers the confrontation with Russia to be overblown and contrived," Sergei Markov, director of the Moscow-based Institute of Political Studies, told Svobodnaya Pressa.

Europeans 'Abdicated Much of Their Sovereignty to Washington'