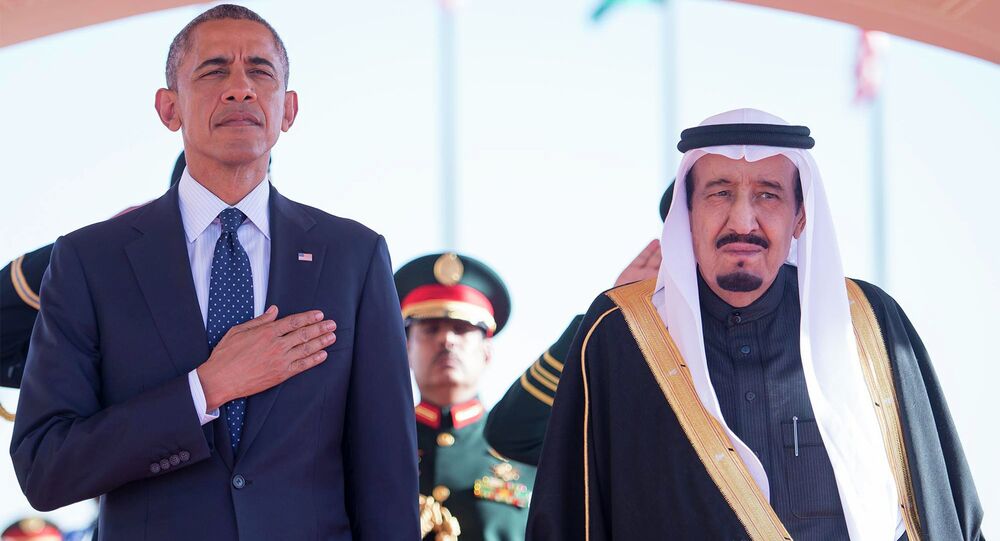 Tensions continue to simmer between Washington and Riyadh: the publication of the 28 pages of the Congressional Inquiry into the 9/11 tragedy is just one link in the chain of events indicating that US-Saudi relations are deteriorating steadily.

The US-Saudi relationship is on its way to an all-time low. The publication of the 28 pages of Congressional Inquiry into the 9/11 terrorist attacks and renewed calls for enacting The Justice Against Sponsors of Terrorism Act that would allow the 9/11 victims to sue the government of Saudi Arabia are signs of the chill in US-Saudi relations.

"While the 28 pages may provide little closure on how the largest-ever terrorist attack on US soil transpired, its publication is yet another indication that the primacy of Saudi Arabia as an irreproachable Middle East ally is in question," US scholar and expert on Iran and the Middle East Kevin L. Schwartz writes in his article for Counterpunch.org.

© AP Photo / Marty Lederhandler
Declassified Report: 5 Saudi Officials Likely Involved with 9/11 Hijackers
"The declassification of the 28 pages comes on the heels of other developments that have undermined the carefully manicured image of Saudi Arabia as stalwart and stable ally," he wrote.

The American scholar listed a series of developments that have exacerbated tensions between Riyadh and Washington and dealt a heavy blow to Riyadh's international image.

The list includes: first, the signing of a nuclear deal with Iran, Riyadh's major rival in the Middle East, in 2015; second, the distribution of Saudi foreign cables containing sensitive information on internal matters; third, the publication of the unverified court testimony of Zacharias Moussaoui that shed light on Riyadh's potential involvement in 9/11; fourth, the war in Yemen that has already resulted in thousands of civilian deaths, and, finally, the execution of 47 individuals on terrorism charges in Saudi Arabia.

Schwartz underscores that in April, the US Senate Foreign Relations Committee introduced legislation aimed at curtailing American arms supplies to Saudi Arabia for use in Riyadh's Yemen campaign.

But that is not all: "elsewhere relations with Saudi Arabia are undergoing a similar reappraisal," the scholar stresses.

© REUTERS / Jacquelyn Martin/Pool
Riyadh's Blackmail: Is Washington Afraid of Saudi Threats to Dump Dollar?
Last year Sweden refused to renew a Saudi arms agreement concluded back in 2005, while the UK canceled its £5.9m contract to provide a training program for Saudi Arabia prisons. Belgium and the Netherlands have taken steps to diminish or halt weapons sales to Riyadh, Schwartz notes.

Furthermore, back in February 2016 the European Parliament voted for an EU-wide ban on arms sales to the Gulf monarchy, citing the "disastrous humanitarian situation" in Yemen, the Guardian reported.

Meanwhile, the release of the 28 pages indicated that some of terrorists involved in 9/11 had ties to Saudi Arabia. That prompted the families of the 9/11 victims to seek the enactment of the Justice Against Sponsors of Terrorism Act — legislation that would allow them to sue foreign governments, most notably Riyadh, for supporting extremism.

The bill was passed by the US Senate in May 2016 but the House of Representatives has yet to act on the legislation.

"We are here today to call on the United States House of Representatives to act now so these families can…hold accountable the Saudi government for possibly aiding and abetting the hijackers," Senator Richard Blumenthal said Tuesday, as quoted by Hartford Courant.

© AFP 2021 / Jim Watson
Mission Impossible: Untold Story of US-Saudi 41-Year-Old Secret Agreement
It is worth mentioning that back in May the bill sparked outrage among Saudi officials. They went even so far as to threaten to sell $750 billion in US Treasury bonds in an attempt to enfeeble US borrowing power should Washington enact the legislation.

However, in an apparent response, the US Treasury Department exposed Saudi Arabia's total US debt holdings for the first time in 40 years, allowing analysts to assess whether Riyadh's vow really spelled trouble for the American economy.

According to Schwartz, Saudi Arabia is taking every effort to bolster its geopolitical posture. For instance, Riyadh's bold Vision 2030 plan to diversify the Saudi economy and partially privatize the state owned oil company Aramco, is aimed at attracting financial decision makers from around the world.

© AFP 2021 / ALAIN JOCARD
It's All About Crude: How Saudi Arabia Fell Into Washington's Oil Trap
Still, skeptics voice their concerns that the new Saudi modernization program is nothing but hot air.

In his article for the influential US-based Council on Foreign Relations, F. Gregory Gause III, Professor of Political Science at the University of Vermont, noted that the relationship between the United States and Saudi Arabia "has come under unprecedented strains in recent years" prompting US President Obama to question Riyadh's value as an ally.

"Washington should thus maintain the relationship for now, while acknowledging its limits. The two countries' differences in priorities will not disappear anytime soon," the US academic underscored.