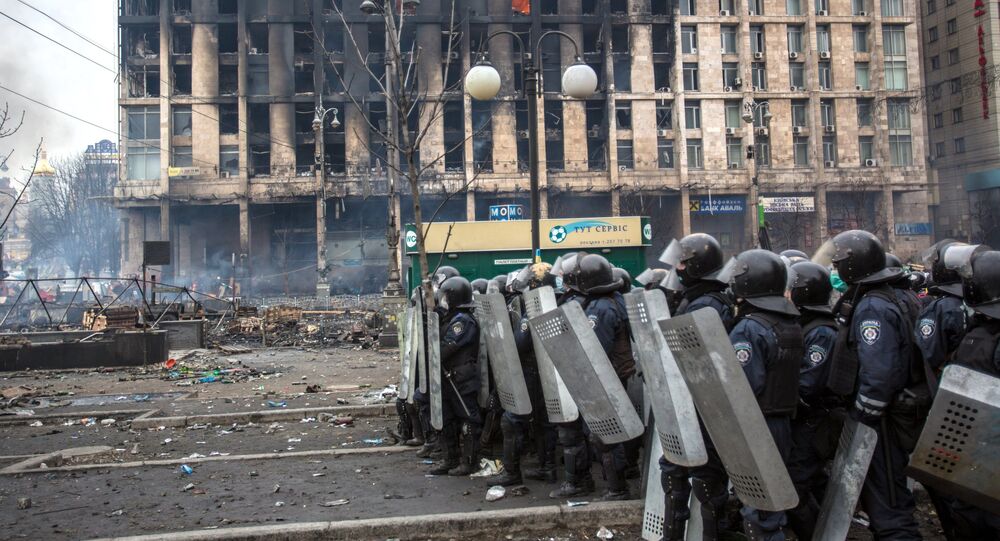 The Atlantic Council, a hawkish Washington-based think tank affiliated with the heavyweights of US foreign policy, is worried about losing ground to Russian 'soft power'. Its advice? More money for Western 'pro-democracy activism' in Eastern Europe, and smears, 'close monitoring' and closure of 'pro-Russian' NGOs, experts and media.

In her recent analysis, published on the Atlantic Council website, Orysia Lutsevych, the manager of the Ukraine Forum at UK's Chatham House (another liberal interventionist think tank), sounds the alarm over what she calls "the long arm of Russian 'soft' power."

Cathal McNaughton
Whither Globalism: What's Behind the Rebirth of Nationalism in the West?
She begins by recalling that in the early 2000s, the Kremlin, in response to a series of pro-Western color revolutions (she calls them 'popular electoral uprisings') "developed a range of proxy groups in support of its foreign policy." This network, she explains, "promotes the Russian World (Russkiy Mir), a flexible tool that justifies increasing Russian actions in the post-Soviet space and beyond."

"Russian groups," she adds, "are particularly active in Georgia, Moldova, and Ukraine – countries that have declared their desire to integrate with the West."

Interestingly, focusing on these three countries, the analyst doesn't mention that their "desire to integrate with the West" was really an elite desire, as evidenced by the fact that pro-Western elites had to carry out coups in order to get into power. Nor does she recall that all of these countries have faced unprecedented levels of corruption and social chaos since their 'revolutions', to the point where the former Georgian president, Mikheil Saakashvili, was forced to flee the country in disgrace. And Moldova and Ukraine haven't fared much better, with the former facing months of street protests over a massive banking scandal and the pro-Western government's ties to oligarchs, and Ukraine facing economic collapse and full-blown civil war in the east.

But back on point: Lutsevych 'explains' that for its part, Russia has been using "a vocabulary of 'soft power' to disguise its 'soft coercion' efforts aimed at retaining regional supremacy. Russian pseudo-NGOs undermine the social cohesion of neighboring states through the consolidation of pro-Russian forces and ethno-geopolitics; the denigration of national identities; and the promotion of anti-US, conservative Orthodox, and Eurasianist values."

Unfortunately, Lutsevych doesn't get into the details of what 'Eurasianist values' are; nor does she explain what role 'conservative Orthodox' values and 'ethno-geopolitics' play in Russia's complex partnerships among its allies in Central Asia and the Caucasus. As for the truly wicked act of offering 'alternative discourses', who knew that the idea of 'alternative viewpoints' could be spun in such a negative light?

Ultimately, the analyst warns, "the activities of these proxy groups," as well as regional countries' political, economic, religious, and cultural connections to Russia, left over from the Soviet and Imperial Russian days, threaten to "seriously damage fragile political transitions and civil societies in the region," (transitions toward the European Union, Washington and NATO, of course).

© Sputnik / Andrei Stenin
External Pressure Creates Conditions for Color Revolutions - Russian Official
Laying out the scope of the 'threat', Lutsevych proceeds to explain what it is that policy elites in Washington and Brussels should do in order to counter it.  Firstly, she intimates, local media in these countries must find out which experts, spokespersons and commentators might be affiliated with Russian NGOs or be involved in spreading a 'pro-Russian message'.

Moreover, she emphasizes, "Russian state media operating abroad must be closely monitored for compliance with the broadcasting regulations of their host countries and, where necessary, sanctioned for violations." The saga of the conflict between the Sputnik news agency and the Latvian government, which banned the.lv domain and vowed to 'monitor hostile propaganda', seems to be the kind of model Lutsevych is proposing. Incidentally, Sputnik Latvia's traffic soared following the domain ban last month.

Another step that can be made, she says, includes the funding of "watchdog organizations" which "should challenge disinformation and launch professionally produced, authoritative information sources targeted at Russian-speaking populations."

© AFP 2020 / STR
How Soros-Funded NGOs Disrupt Real Democracy Around Russia's Borders
However, with such groups existing across the post-Soviet space for nearly a quarter century now, and receiving the funding of both governments (Radio Liberty/Radio Free Europe) and private individuals (George Soros and his Open Democracy Foundations initiatives), it's unclear how much more can be squeezed out of the anti-Russian propaganda machine.

If attempts to discredit experts, monitoring Russian media and the creation of counter-propaganda isn't enough, Lutsevych notes, pro-Western elites should go a step further and silence the pro-Russian groups directly. "The activities of proxy groups in host countries should be closely monitored and closed down if they are deemed to undermine state sovereignty or represent a threat to territorial integrity." This sort of thing, it should be noted, has already been done in several countries, Ukraine being the most prominent example.

That's all well and good, but two questions come out of Lutsevych's recommendations: a) how is monitoring, clamping down on and silencing the 'pro-Russian' viewpoint conducive to social cohesion and democratic values? And b) if the extension of Russian soft power in the pro-Soviet space is inherently wicked, what makes Western involvement, which doesn't have the same centuries' long historical, cultural, economic, political experience of engagement, any better?