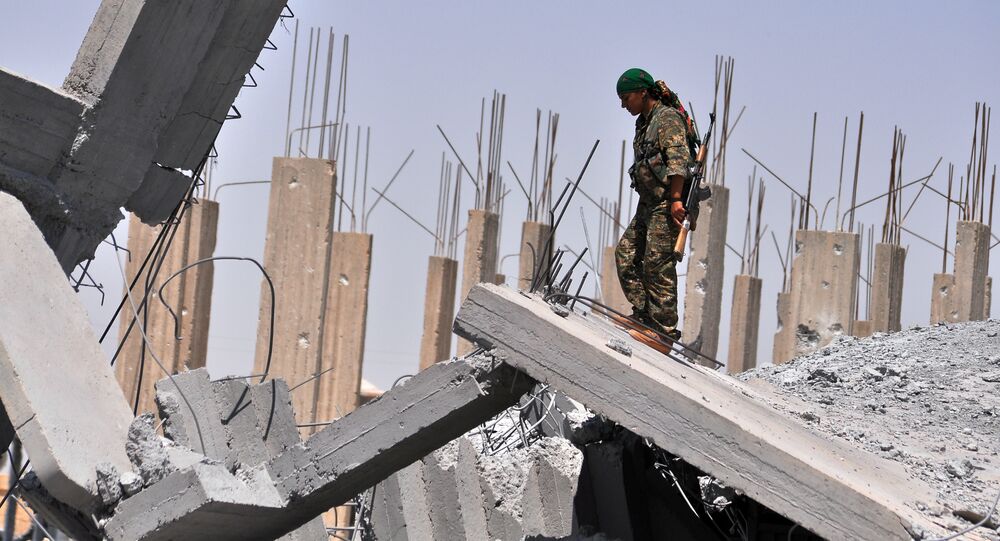 Daesh is buckling under the pressure from the Syrian Arab Army and the Syrian Democratic Forces' advance; at the same the terrorist group is suffering significant damage due to increasing defections and inner strife, Stratfor, also known as "the shadow CIA," reports.

Although Daesh still poses an imminent threat to peace and stability in the Middle East, new cracks have appeared in the Islamist organization.

"Taking advantage of the cease-fire, loyalist forces supported by Russia and Iran have launched two significant offensives, one aimed at the city of al-Qaryatayn and the other at the ancient city of Palmyra. At the same time, the Syrian Democratic Forces are pursuing their offensive against the Islamic State [Daesh] in northern Syria, advancing into Deir ez-Zor for the first time and making inroads closer to Raqqa, the extremist group's self-declared capital," Strategic Forecasting Inc. (Stratfor), global intelligence company, reported on March 7.

The intelligence company, sometimes referred at as "the shadow CIA," draws attention to the fact that "perhaps most damaging" to Daesh is the dissent rising within the terrorist group.

© Sputnik / Mikhail Voskresenskiy
'Realistic Dream': Syrian Rebels Could Side With Damascus to Defeat Daesh
Indeed, on March 6 Alalam media outlet reported on intensifying clashes between citizens of Raqqa, the de facto capital of Daesh, and Islamists.

"One local source in Raqqa confirmed that around 200 suspect members of ISIS [Daesh] defected only in the last two days. Meantime, a group called "Faylak al-Sham" claimed that dozens of former ISIS militants joined the group in northern Aleppo," Alalam wrote, adding that the offensive of the Syrian Arab Army and their allies in the eastern part of Aleppo and northeast part of Hama province poses a significant threat to Daesh's "capital."

On March 7, Sputnik shed some more light on the event, citing an unnamed source with the knowledge of the matter.

"About 200 Syrian militants of Daesh [another name for Islamic State] took the side of residents of Raqqa, which forced the terrorists to organize roadblocks at the entrance to the city," the source told Sputnik.

The source narrated that residents of Raqqa clashed with Daesh fighters on Sunday and flew Syrian flags in five neighborhoods of the city.

"Based on the reports released by the Syrian government officials over the last 48 hours, the civilian resistance groups have liberated a total of 10 neighborhoods from the ISIS [Daesh] terrorists governing the provincial capital of the Al-Raqqa Governorate," the media outlet reported Monday.

Stratfor's analysts stress that reports of such incidents are "diverting much of the Islamic State's security forces at a time when the group desperately needs fighters at the front lines."

Meanwhile, armed opposition groups continue to join the Syrian truce, according to Russia's Ministry of Defense.

#SYRIA During last 24 hours, Centre for reconciliation received 44 appeals, most with requests for humanitarian aid and info about attacks

​Neither the Russian, nor the Syrian Armed Forces have carried out strikes on units which have joined the ceasefire and informed Russian or the US centers about their location.

"The cease-fire's collapse, which would halt the negotiation process, is not in Russia's interest," Stratfor's report emphasizes.

According to the agreement inked by Moscow and Washington, the two coalitions continue to fight against Daesh, al-Qaeda affiliates and other Islamists in the region.

Interestingly enough, Stratfor remarks that a new front against Daesh is opening up in the desert of southern Syria. The armed group, backed by the US and the Gulf Cooperation Council, is preparing to launch an all-out offensive in Syria. The Jordan-based 'New Syrian Army' is supposed to expel Daesh from Deir ez-Zor, according to Stratfor.

© AP Photo
Oil Revenue Dry-Up Leaves Daesh Reliant on Gulf Donations
The question remains open whether or not the new initiative will destabilize the fragile balance of power in the region.

"The Islamic State [Daesh] is far from defeated, and the group continues to stage successful local counterattacks and devastating terrorist operations in both Syria and Iraq. However, the consistent pressure has so diminished the Islamic State's capabilities that it is no longer clear whether the group will be able to capture significant territory in a strategic offensive," Stratfor analysts conclude.