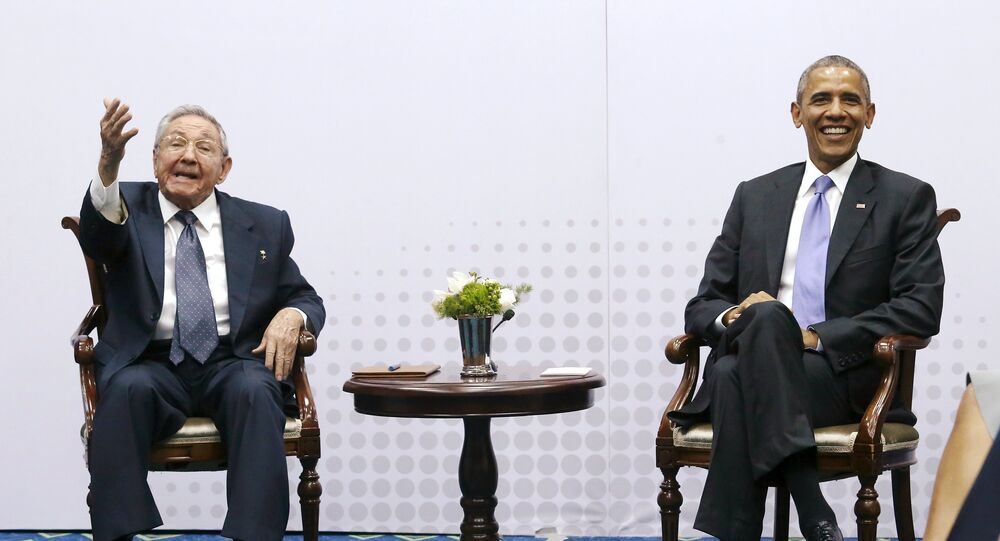 Cuba Accuses US of Fabricating Internal Opposition Ahead of Obama Visit

Washington’s bid to normalize relations with Havana takes a turn for the worst.

In a lengthy Wednesday editorial, Cuba’s Communist Party newspaper Granma demanded that Washington stop meddling in the country’s internal affairs and called on US President Barack Obama to change his administration’s policy of requiring countries to open their economy to neoliberal colonialism as a predicate for normalized relations.

The editorial, published in the official outlet of the Communist government in Cuba, reads that while it welcomes President Obama to Havana later this month, much to the dislike of several Beltway lobbyists, the country has no intention of changing its policies.

The White House faced criticism from domestic media outlets Wednesday, questioning the wisdom of meeting with Cuba, if the country’s administration remains intractable on the same trade and economic policies that the US electorate is currently condemning in the presidential race. The White House brushed off the criticism, calling President Obama’s trip an unprecedented opportunity to engage with the Cuban people.

However, Beltway Democrats and Republicans wonder whether the White House gave away too much to restore ties with the island nation 90 miles (145 km) south of the US. Congressional Republicans continue to block Obama’s desire to fully lift the longstanding trade embargo with Cuba.

The internal challenges that the Obama Administration faces in normalizing relations with Cuba, however, aren’t limited to the establishment. Republican frontrunner Donald Trump, running as an alternative to mainstream establishment politics, says "we should have made a better deal."

Unfortunately for the Obama Administration, it appears the Cuban government is starting to view the arrangement in the same light, in relation to their own interests in the negotiation. The editorial spotlighted a list of grievances, the first of which is the failure by the US to lift the trade embargo and America’s continued funding of anti-Castro political dissidents within the country.

"The United States should abandon the pretense of fabricating an internal political opposition, paid for with money from US taxpayers," the piece states. It also accuses the Obama administration of enforcing "other regulations and intimidation" against the Cuban people, in a continuation of over 50 years of hostility.

The Cuban government assured its domestic readership that the island administration has not "renounced any of its principles or ceded the slightest bit," to secure renewed relations with Washington.