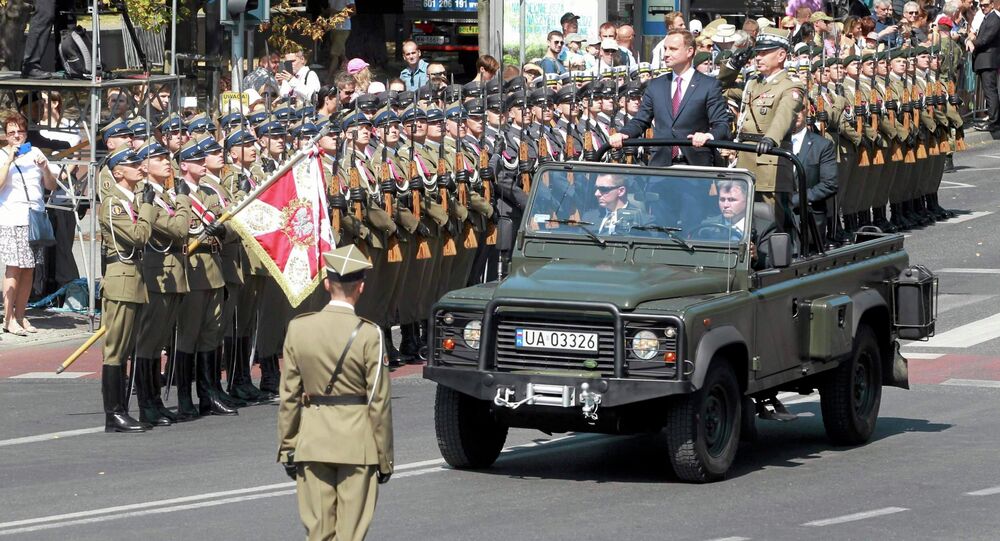 NATO defense ministers have approved a massive buildup of the alliance's military presence in Eastern Europe, including the creation of a 'new multinational force' which operating on a rotational basis; Warsaw is likely to remain unsatisfied, demanding permanent NATO bases on its territory, security researcher John R. Deni suggests.

© REUTERS / Francois Lenoir
NATO Ramps Up Military Forces Near Russia to Cold War Levels
On Wednesday, NATO defense ministers approved an initiative to give another boost to the alliance's presence in Eastern Europe, creating "an enhanced forward presence" in the form of a multinational force charged with "mak[ing] clear that an attack against one ally is an attack against all allies," NATO Secretary General Jens Stoltenberg announced.

The buildup, the official added, comprised "the most significant boost to our collective defense since the end of the Cold War."

The creation of the new force follows on the heels of the establishment of a special "Spearhead Force" within the NATO Response Force known as the Very High Readiness Joint Task Force (VJTF) in 2014, and increased NATO exercise activity in Eastern Europe, and near Russia's land and maritime borders, over the past two years.

NATO, Stoltenberg recalled, had already "tripled the size of the NATO Response Force to around 40,000 troops," and is now "increasing [its] presence in the eastern part of the alliance with more assurance measures, meaning more planes, air policing, naval presence in the Baltic and Black Seas, increased naval presence and also more boots on the ground with more exercises and troops."

© AP Photo / Virginia Mayo
NATO Seeks to Build Up Forces in Black Sea, Acquire Intelligence
At the same time, the official welcomed the Pentagon's proposal to increase its 2017 military budget, including the quadrupling of outlays on spending for its European garrison.

Predictably, Russian officials responded to the announcement on the new buildup by noting that NATO is "trying to draw [Russia] into a state of Cold War," adding that Moscow "will continue to strengthen its defensive potential" and "to improve the deterrent potential of nuclear weapons."

Unfortunately, even the plans for 'enhanced rotational deployment' will not satisfy some of the more hawkish of NATO's members, particularly Poland, defense analyst John R. Deni suggests.

In an article for foreign policy magazine The National Interest, Deni, a research professor at the Carlisle, Pennsylvania-based Army War College's Strategic Studies Institute, noted that NATO's plans for a rotating presence in Poland will leave Poland's leaders, desperate for a permanent, large-scale NATO presence, disappointed.

"The NATO alliance is treating Poland and other allies in the region like a buffer zone, refusing to permanently station troops there and hence provide the same level of security that has long been accorded other allies to the West…[These] were the very public words of Andrzej Duda, the recently elected president of Poland," the analyst recalled.

"Unfortunately," Deni writes, "major obstacles – political and economic – stand in the way of NATO establishing permanent troop concentrations in Poland or elsewhere in Eastern Europe. Nevertheless, Duda's comments and his relentless, vocal pursuit of permanent NATO forces on Polish soil mean that, by diplomatic standards, the upcoming NATO summit in July [in Warsaw] is likely to be downright riveting."

© AFP 2021 / RAIGO PAJULA
Russian 'Threat': Every Time Pentagon Needs More Money a 'Bad Guy' Appears
The analyst, for his part, agrees on the need for a NATO buildup in the region, joining other Western analysts, pundits and journalists in talking about "Russian aggression" in Crimea, as well as Russia's phantom "invasion of eastern Ukraine." NATO, he suggests, is vulnerable in its "ability to conduct warfare against a large, near-peer adversary like Russia," especially in the short-to-medium term.

"The United States," he notes, has "also deployed additional F-16s and transport aircraft to its US-Poland aviation detachment, based in Lask, Poland," and "moved to increase its stocks of military equipment pre-positioned in Europe and expand the scope of its European Reassurance Initiative through additional funding and increased rotational deployments." Other NATO members, including Germany, the UK, Hungary, Portugal and Denmark have similarly rotated troops in on a bilateral basis.

Citing Russian President Vladimir Putin's commentary last summer that "only an insane person" could imagine Russia attacking NATO, the defense analyst nevertheless oddly suggested, citing Eastern European leaders, that "ultimately there is no way for certain to know if deterrence is succeeding."

"In terms of assuring its member states, the evidence is clearer – and it's not good for NATO," Deni writes. "Some allied governments seem quite unsatisfied with initial alliance actions, arguing for a far more robust NATO response that would include permanent deployment of troops. In particular, Polish leaders expressed 'exasperation' with the alliance's unwillingness to strengthen defenses in the east…"

Furthermore, "more objective assessments, such as those available through war games and other analyses, seem to bear out the perceptions of allied governments in Eastern Europe. In short, given today's allied force posture, NATO will find it difficult to defend or retake Baltic state territory in the face of any large-scale, determined Russian invasion."

© Sputnik / Igor Zarembo
Baltic Bridgehead: Why Russia Has Every Right to Be Alarmed by NATO's Buildup in the Region
Again, despite citing the Russian president on the matter just a few lines earlier, the question the analyst doesn't want to ask himself is why on earth Russia would seek to wage a war against NATO in the Baltics, given that in practice, Moscow has more reason to be concerned about the NATO buildup on its borders than the other way around.

Fortunately for Moscow, and unfortunately for NATO, Deni wistfully notes, there are several factors which limit the alliance's ability to accede to Warsaw's demands.

"Politically, there remains strong disagreement within the halls of NATO over the nature of the alliance's relationship with Russia." The 1997 NATO-Russia Founding Act, "designed to formalize relations between the two and provide Russia a role in some alliance deliberations without giving it a veto," is a document which "Germany in particular continues to view…as a foundational document for the post-Cold War era."

Berlin, "given its perceptions of the Founding Act…is unlikely to simply dispense with the agreement's limitations on force posture in the east."

There are strategic limitations as well, the analyst notes. "Latvia," for instance, "where roughly 27 percent of the population is of Russian descent, has been far less vocal on issues such as permanent presence of US or NATO forces on Latvian territory, out of concern over provoking Russia too much. Still other allies, such as Italy, Spain and Greece, are far more concerned with security matters in Europe's south and southeast, such as illegal migration from Africa and Asia."

© AP Photo / Geert Vanden Wijngaert
Good News for Taxpayers: New US Budget Includes $4.3Bln for NATO Members, Allies in Europe
Unfortunately, Deni absurdly suggests, NATO's plans for rotational deployment are "unlikely to deter effectively because [they] may be unable to prevent opportunistic aggression" on Russia's part. At the same time, he admits that the US and the UK, "the two allies most experienced in permanent forward presence – are unlikely to change tack and decide to permanently base military forces in Eastern Europe."

As a result, he concludes, the Polish president "is likely to be disappointed in his pursuit of NATO bases with permanently deployed allied troops in Poland or elsewhere in Eastern Europe. Despite their inadequacies, rotational bilateral deployments remain the most likely means through which individual NATO allies will adjust force posture in northeastern Europe…How this plays out in the run-up to and during the July NATO summit could provide for a great deal of midsummer fireworks –even if only of the diplomatic variety."

NATO to Boost Presence in Eastern Part of Alliance - Stoltenberg