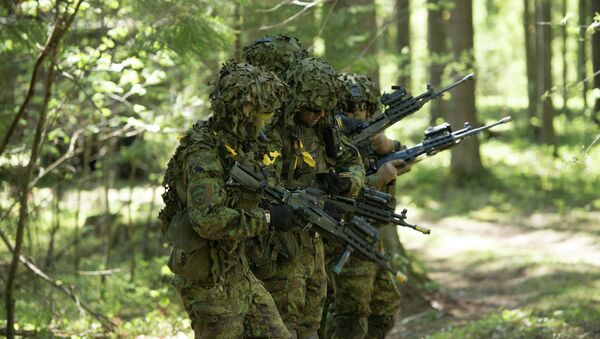 © AFP 2021 / RAIGO PAJULA
Subscribe
A nonsensical story of Russia's potential invasion of the Baltics has caught a second breath in Western mass media just a day after the Pentagon announced it would seek to quadruple its budget for Europe in 2017. Coincidence? Irish journalist Danielle Ryan does not think so.

Why Claims That Russia Plans to Wage 'Reckless War' in Baltics Are Absurd
There is something mysterious about the unanimity demonstrated by the Western media and think tanks in the past few days regarding the prospects of a Russian invasion of the Baltics.

Nothing hinted at any trouble in July 2015, when Financial Times finally admitted that the Kremlin is obviously not planning to rebuild the Russian or Soviet Empire in "a literal sense" anytime soon.

"A piece published by the Financial Times last July admitted that the 'consensus' among diplomats and analysts was that Putin had 'not embarked on a rampage' to recreate an empire 'as some feared last year'," Danielle Ryan, an Irish freelance journalist and media analyst, narrates in her article for RT.

"Given that new-found consensus, one might have suspected that the lull in stories about a forthcoming invasion could be chalked up to journalists deciding to put the subject to rest — but one would have been wrong. For they were back last week with a vengeance," she continues.

Russians Are Coming! Why West is Bringing Back Image of ‘Bad’ Russians
Indeed, on February 3, the UK's BBC broadcasted a controversial show that simulated a Russian invasion of Latvia, accompanied by a nuclear attack on Britain. On the same day, the RAND Corporation, an influential American think tank released a report saying that Russia is able to overrun the Baltic NATO member-states in 60 hours.

Ryan calls attention to the fact that a month ago, the Atlantic Council — "whose primary founding aim is to defend NATO interests" — began to bang the drums over Russia's imaginary imperial designs for the Baltic states.

"Most anxieties focus on the Baltic states as Russia's next potential military target," Stephen Blank, a Senior Fellow at the American Foreign Policy Council, warned.

"The piece was then re-published by Newsweek with the headline: 'Counting down to a Russian invasion of the Baltics'," Ryan points out.

It's almost as if these guys would just love Russia to invade the Baltics for a bit of excitement, isn't it? pic.twitter.com/lt9Q2JbvAQ

​So, what was the root cause of the propaganda campaign?

According to the journalist the answer is obvious: on February 2, US Defense Secretary Ashton Carter announced that the Pentagon would seek to quadruple its budget for Europe in 2017. The pretext for the increase is a "military threat" posed by Russia to Central and Eastern Europe.

"This happens every time the Pentagon wants more money to play with. Various 'studies' about the danger posed by whichever bad guy is in fashion start appearing. Experts suddenly realize that the US military is drastically underfunded in said area of immediate strategic importance. Officials begin making even more outlandish statements than usual. And the media eat it up, apparently completely unaware of the fact that they are being taken for a ride," Ryan underscores.

Fanning the Flames: US Think Tank Presents 'Russian Invasion' Scenario
In light of this, the question arises why, for God's sake, would Russia attack the Baltics?

"So what would Russia gain from attacking the Baltics?" Doug Bandow, a former special assistant to President Ronald Reagan, asked in his op-ed for The National Interest, commenting on the RAND report.

"[Russia would gain] a recalcitrant, majority non-ethnic Russian population. A possible temporary nationalist surge at home. A likely short-lived victory over the West. The costs would be far greater. Grabbing the Baltics likely would spur population exodus and trigger economic collapse," Bandow stressed, highlighting the absurdity of the assumption.

Unfortunately, the voice of reason is being silenced.

​"We need to understand more and condemn less," Kent University Professor Richard Sakwa wrote in his letter to the Guardian last week, as quoted by Ryan. The academic argued that constant "demonization" of Russia would only deteriorate the current state of affairs.

"We note with alarm that public discourse about Russia is colored by militaristic and dangerous terms which may talk us into war. The country's portrayal as an aggressive power increases its perception of threat, accelerating a military and ideological escalation. Irresponsible talk of conflict is risky and mistaken," Sakwa underscored.

However, his letter remains largely unnoticed placed in the 'Letters' section, while leading articles continue to fan the flames.

000000
Popular comments
The Pentagon has its eye on two new toys - the B-3 bomber and a Sixth-generation air-superiority fighter. DARPA recently revealed two major research breakthroughs. One is in the field of jet propulsion (a new turbofan engine that puts out as much thrust as current engines but uses half the fuel, giving the aircraft twice the range) and the other is in the field of solid state lasers (a laser cannon small enough and cool enough to mount on a fighter jet that can shoot down an unlimited number of incoming missiles). Now, the Pentagon wants to design and build new airplanes to use this new technology. They need a trillion dollars to do this. Where are they going to get a trillion dollars? Easy... Convince the U.S. taxpayers that there's an imminent threat to U.S. interests. Then, just sit back and watch congress open the coffers. Russia and China make convenient boogeymen.
coolerheads
9 February 2016, 20:29 GMT6
000000
Remember when Elliot Carver's stealth ship sank the HMS Devonshire in the South China Sea? Tabloid news and truth are two very different things. Anyone with half a brain and the will to use it can see what is going on here.