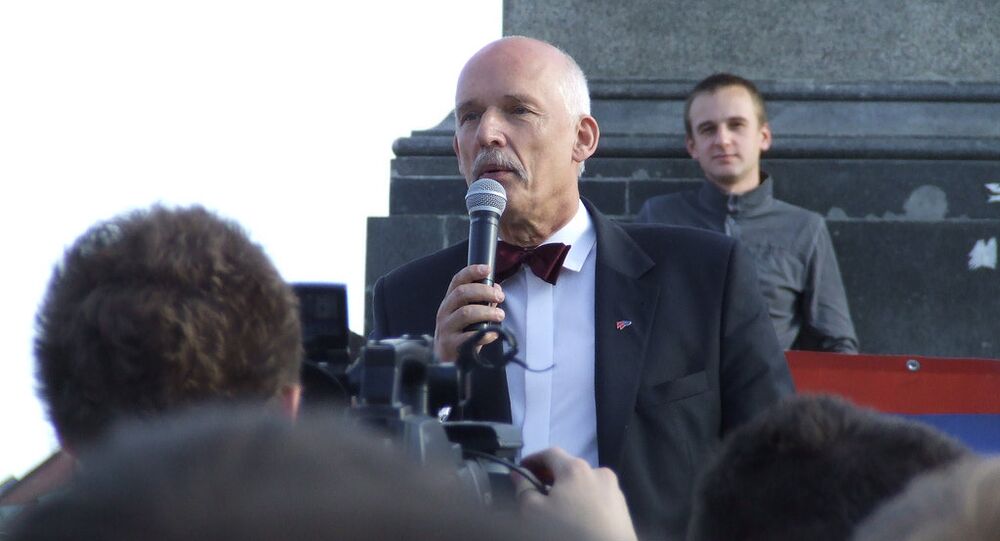 Ukrainian prosecutors have launched an investigation into Polish MEP Janusz Korwin-Mikke's visit to Crimea this past December, saying that he traveled to the peninsula from inside Russia, and did not pass through Ukrainian border controls, thus 'illegally crossing the Ukrainian border', Radio Poland reports.

© AP Photo / Alik Keplicz
'Banderite Ukraine, not Russia, is Our Enemy' – Polish Politician
The investigation into the politician's visit to the peninsula was launched by the newly-formed 'Prosecutor's Office of the Autonomous Republic of Crimea, which is based in Kiev. Despite its association with the General Prosecutor's Office, the office is effectively a phantom department, given that it has no effective jurisdictional authority over the Crimean peninsula, which overwhelmingly voted to break off from Ukraine and join Russia in March 2014 following the Maidan crisis.

Korwin-Mikke's visit to Crimea late last year "to see what the situation is really like" was met with sharp criticism from both Kiev and Warsaw. The Ukrainian Foreign Ministry claimed that the visit violated international law and Ukrainian legislative procedure. The Polish Foreign Ministry, for its part, suggested that the visit to the Russian peninsula was "highly irresponsible."

© Sputnik / Sergey Malgavko
French Lawmakers to Visit Crimea, E Ukraine Again After PACE Tongue-Lashing
Korwin-Mikke, a libertarian conservative politician who has repeatedly spoken out against the excesses of post-Maidan Kiev, especially its project to rehabilitate Second World War-era war criminal Stephan Bandera, has also called for improved relations between Poland and Russia, saying that Moscow could serve as an effective counterbalance to Brussels for Warsaw.

What's the Bavarian PM's Visit to Moscow All About?