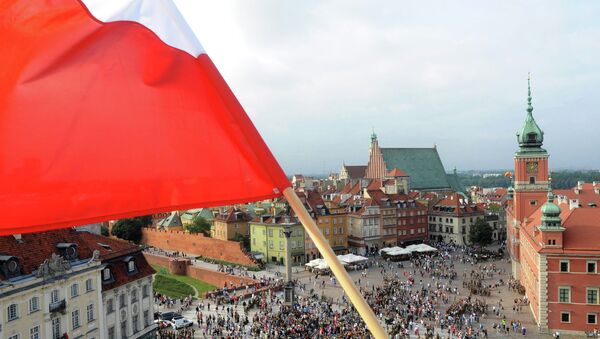 © AP Photo / Alik Keplicz
Subscribe
In a recent interview for Polish news network TVN 24, MEP Janusz Korwin-Mikke emphasized that Poland has more to fear from a powerful Germany and a chaos-ridden Ukraine than it does from Russia.

Giving an interview for TVN24 political talk program 'One on One' on Tuesday, the libertarian conservative politician was asked to comment on Gazprom's plans to build the Nord Stream II natural pipeline, which would bypass Poland on its way to Germany via the Baltic Sea.

Noting that he has his own reservations regarding the project, Korwin-Mikke nonetheless emphasized that Russia is not Poland's enemy, in spite of what politicians and much of the country's news media have suggested.

The politician noted that in today's environment, it is the chaos-ridden "Ukraine, not Russia, which is Poland's enemy. There people are voting for the Banderites."

In Poland, Bandera's Ukrainian Insurgent Army is loathed for the massacre of tens of thousands of ethnic Poles in the regions of western Ukraine between 1943 and 1945. Bandera's rehabilitation in contemporary Ukraine is a major source of embarrassment for both of Poland's major parties –the center-right Civic Platform and the nationalist-right Law and Justice, given Warsaw's active political role in the country following the Maidan coup.

Contacted by Sputnik to expand on the comments he made for TVN24, the politician emphasized that having pushed for so long to see Ukraine become independent from Moscow, Poland's mainstream politicians "have not paid attention to the fact that the situation has changed dramatically, and today it is Ukraine which has become our enemy, with Russia factually becoming an ally."

Korwin-Mikke explained that in the present political environment, unfortunately, both of the country's major conservative parties, and especially Law and Justice, continue a policy of blind hatred for Russia, with Law and Justice in particular "blaming the country for Czarism, for the Soviet Union, for everything which is possible, without recognizing that Russia has changed." The Civic Platform, meanwhile, mimics the attitudes prevalant in Berlin, according to the politician.

Later this month, Poles will vote to elect both the upper and lower houses of parliament. Commenting on the elections for Sputnik, Korwin-Mikke said that his conservative libertarian and Eurosceptic party, the Coalition for the Renewal of the Republic – Freedom & Hope, is optimistic that a change in the country's attitudes toward Russia is possible. "I am an optimist," the politician noted, "because people are tired of listening to these terrible quarrels; they see that the Russians are on the right track. The Russians are fighting the enemies of President Assad, in order to protect Syria's minorities, including the Christians. Gradually, this anti-Russian obsession is passing."

Polish Hospitality? Majority of Poles Now Oppose Accepting Refugees
Last month, Korwin-Mikke raised a storm of controversy over a speech before the European Parliament in which he described migrants who were unwilling to work as "human trash." The politician defended his controversial words in his TVN24 interview Tuesday, suggesting that "defining a person who wants to live at the expense of someone else's work as 'human trash' is appropriate."

Korwin-Mikke's party currently has three seats in the country's lower house of parliament, the Sejm, along with two seats, including Korwin's, in the EU parliament.

Speaking to Sputnik earlier this year, Korwin-Mikke made headlines by noting that he would like to visit Crimea following the Polish parliamentary elections, pending an invitation from Russian authorities. Earlier, he explained that his party considers Russia to be a strong counterbalance to Brussels, adding that Warsaw should work to develop closer trade ties with Moscow.