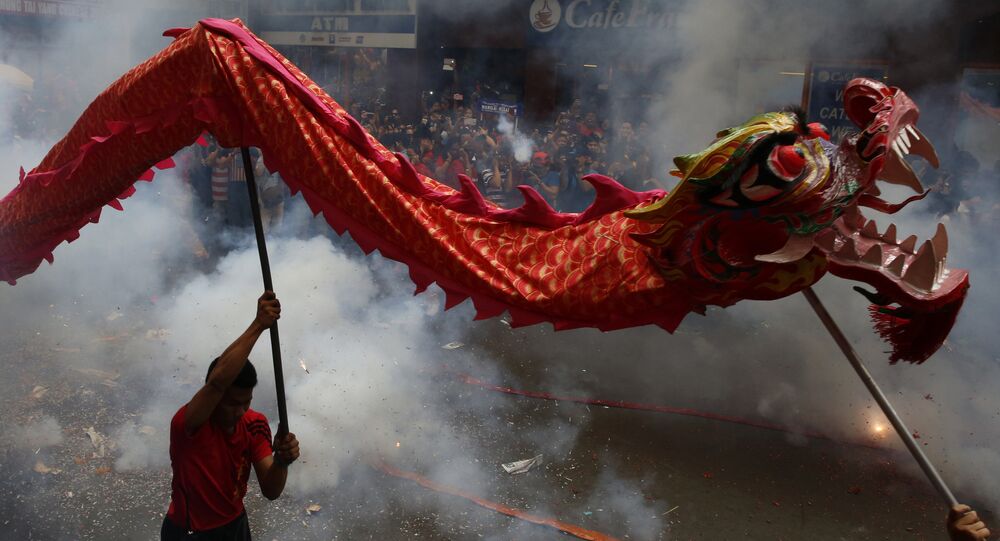 Welcome to the Club: Will Wall Street Tame the Chinese Dragon?

Washington is making attempts to seduce Beijing into being a polite well-behaved junior member of the club of the "Rich White Masters," F. William Engdahl notes.

Although China's economic growth has slightly slowed down, it still remains one of the most rapidly evolving economies; that means Washington has to deal with Beijing's rising global influence whether it likes it or not.

However, Wall Street tycoons have seemingly found a way out. What if they persuaded China to take the side of the "Rich White Masters" instead of challenging the dollar-dominated world?

"The US unblocked the IMF reforms as well as opening admission of China's renminbi currency into the IMF [International Monetary Fund] SDR basket to further seduce China into being a polite, well-behaved junior member of the club of the 'Rich White Masters',"  American-German researcher, historian and strategic risk consultant F. William Engdahl suggests in his article for New Eastern Outlook.

© Sputnik / Alexandr Demyanchuk
OK, Dollar? Russia Mulls Trading With China, Iran in National Currencies
The researcher narrates that on December 18, "after exactly five years stall," the US Congress eventually approved a 2010 reform of the IMF's quotes and governance.

The Fund will increase its resources to $660 billion, while 6 percent of quota shares will go to "dynamic emerging market and developing countries." Four emerging economies — Brazil, Russia, India and China — will now be among the ten top members of the IMF, most notably United States, Japan, Germany, Italy and Britain.

"Is this long-awaited and little-expected change of heart from Washington a major concession to China and the BRICS countries?" Engdahl asks.

© REUTERS / Jason Lee
Non-Dollar Trading: Emerging Economies Deal a Heavy Blow to Petrodollar
Indeed, Washington and Wall Street moguls aren't going to hand over the reins of the IMF to the developing countries.

For a serious policy change in the IMF a majority of 85 percent is required. That insures that Washington which possesses a 17.4 percent voting share can block any decision.

After the reform the US voting share remains 17.4 percent, Japan stays at six percent, Germany has lost 0.4% to 5.6%, the UK and France have dropped a mere one percent to four percent. China now has eight percent, but in fact it does not save the day, the researcher emphasizes.

"The Executive Board's decision to include the RMB [renminbi] in the SDR basket is an important milestone in the integration of the Chinese economy into the global financial system," Christine Lagarde, Managing Director of the IMF, stated on November 30, 2015.

Strong policy actions by emerging & advanced economies are a win-win for the global economy https://t.co/GKpIb4OvbH pic.twitter.com/MVC6mGlyel

​The global plutocracy does want to integrate the Chinese economy into the West-led global financial system, Engdahl stresses. They want to tame the Red Dragon and thus ensure the stability of the Bretton-Woods system.

It still remains unclear whether or not Beijing would swallow the bait, the researcher stresses.

On the one hand, state-owned Xinhua media outlet stated clearly that "China is seeking to reform the current US-defined international order, rather than revolutionize it."

On the other hand, China's President Xi Jinping has repeatedly demonstrated that he would not allow anyone to twist Beijing around his little finger.

Furthermore, China, Russia and Iran are driving the world away from the petrodollar's hegemony by abandoning the dollar as a means of payment for oil. China buys Russia's oil for the renminbi, while India and Iran have shifted to rupee in their mutual oil trade.

And that is not all. Tehran, Beijing's close and perspective ally, is planning to bill new international crude sales in euros in order to reduce its dependence on the US dollar, Reuters reported Monday.

To paraphrase Engdahl, it is more likely that Beijing is "playing a far more subtle and sophisticated game of deception on the tradition of the great Chinese strategist Sun Tzu," rather than "locking its horse to the dollar wagon."