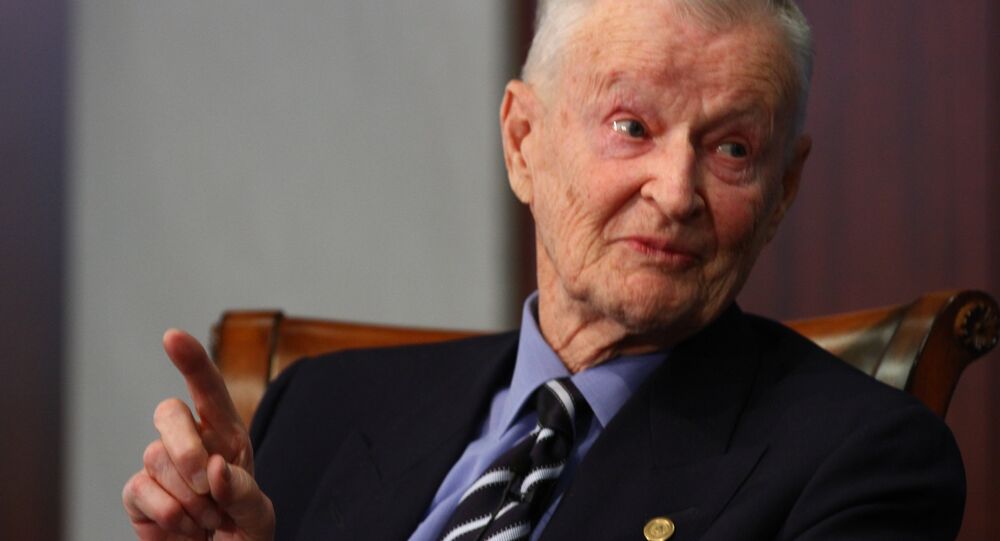 Brzezinski Says Conflict in Europe Should Not Turn Into Worldwide Collision

The former US national security advisor Brzezinski argued that the only way to reinforce regional stability in Europe “is to deploy now in the Baltic states some tripwire NATO contingents, including also from the US.”

© Sputnik / Evgeny Biatov
Summing Up 2014: Foreign Minister Says Russia Open to Dialogue, Not Isolated
WASHINGTON, January 21 (Sputnik) — The United States should work to prevent the conflicting US and Russian interests in Europe from spilling over into other areas of shared interest, former US National Security Advisor Zbigniew Brzezinski said during a Senate Armed Services hearing on Wednesday.

“We [the United States] should try to avoid universalizing the current conflict in Europe into a worldwide collision with Russia,” Brzezinski told members of the US Senate.

“It is both in America’s and in Russia’s interest that the escalating violence in the Middle East does not get out of hand.”

While advocating increased collaboration between the United States, Russia, as well as China over enhancing stability in the Middle East, Brzezinski emphatically encouraged the United States and NATO to take steps toward “enhancing regional deterrence” in Europe.

Do you think Russia and the US are heading back towards Cold War?
Voted: 1
All polls
The former national security advisor and unofficial advisor to multiple US presidents, Brzezinski, argued that the only way to reinforce regional stability in Europe “is to deploy now in the Baltic states some tripwire NATO contingents, including also from the US.”

Specifically, he called for “prompt prepositioning of US-NATO military equipment” in Poland, and noted that such deployments would not be threatening to Russia “because of their limited scale.”

Russian Foreign Minister Sergei Lavrov stated in his year-end address earlier that the United States and Russia should return to constructive bilateral discussions, as well as “mutual activities” on a world stage.

Recent reports from the US State Department have cited increased areas of US-Russian cooperation against the threat of the Islamic State in Iraq and Syria. The two countries continue to work closely together toward negotiating a nuclear deal with Iran, and in recent years have engaged in constructive actions to eliminate chemical weapons in Syria.