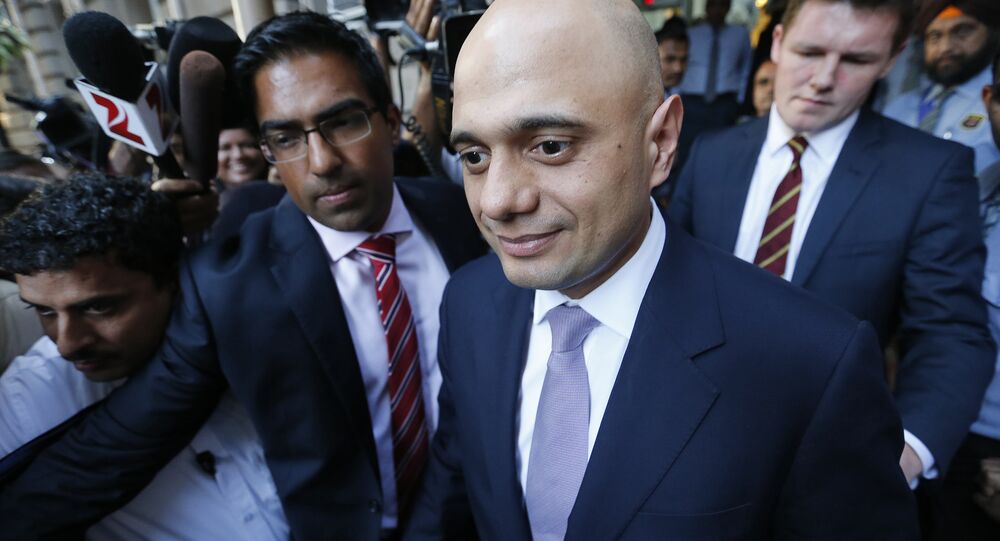 After the resignation of Amber Rudd, the Prime Minister has chosen Sajid Javid to replace her as Home Secretary. Sputnik looks at Javid, one of only a tiny handful of ethnic minorities in the upper echelons of the Conservative Party.

Sajid Javid was the obvious choice to replace Amber Rudd as Home Secretary, coming as he does from a family of immigrants from Pakistan.

The Windrush scandal, which led to downfall of Rudd on Sunday, April 29, was perceived by many people in Britain as proof that the Conservative Party remained at heart a "nasty party" with a virulent vein of xenophobia and racism at its heart.

So who better to replace Rudd in one of the top offices of state but a man whose parents came to Britain from Pakistan in the 1960s.

The “favourites” to replace Amber Rudd as Home Secretary are Sajid Javid, Michael Gove and Jeremy Hunt. No wonder people are asking me to do the job…

Windrush was 'Very Personal' for Javid

Javid himself, in an interview with the Sunday Telegraph, said the Windrush episode had been "very personal" because it could have been his family facing a threat of deportation.

Javid, who was previously the Housing and Communities Secretary, said he was "immediately impacted" when he heard how the children of immigrants from several of Britain's former Caribbean colonies were facing deportation from the UK.

But who is Javid and why is he a Tory when the majority of Asian MPs and politicians in Britain tend to represent the Labour Party?

Sajid Javid, the man who called Momentum a ''Neo Fascist group'' in the House of Commons is now the new Home Secretary.

The Government is literally rotting right before our eyes and Theresa May is now at her weakest and most vulnerable since the General Election last year.

​His father, Abdul Ghani-Javid, arrived in Britain in 1961, having lost everything after the partition of India in 1947.

Born in Rochdale, Grew up in Bristol

Abdul got a job in a cotton mill in Rochdale, near Manchester, which is where Sajid was born in 1969.

Later his father moved them to Bristol, where he opened a garments shop.

Young Sajid was the first in the family to go to university — he studied politics and economics at Exeter.

"This is the root of my conservative beliefs. My mother and father had nothing and, like many people in their adopted country, worked their way up. The abiding lesson was clear to me: don't doubt yourself and don't ever stop trying," Javid said in an interview in 2014.

"Sajid Javid was more Thatcherite than Margaret Thatcher." — Tim Montgomerie. All hail our new home secretary, who voted for every aspect of current Conservative immigration policy.

After university Javid worked in business and finance and became a Vice President at Chase Manhattan Bank at the tender age of 25.

He later moved to Deutsche Bank in London and worked on emerging markets.

His wife, Laura, comes from Bristol and the pair met working in an insurance office.

Javid left his lucrative job as Managing Director at Deutsche Bank in the summer of 2009 and was elected as the Conservative MP for Bromsgrove, an affluent town just south of Birmingham, in the 2010 General Election.

Diane Abbott on Sajid Javid's appointment: "The change in Home Secretary will mean nothing unless Theresa May's ‘hostile environment’ policy is finally brought to an end."

​It is a very safe Tory seat and he replaced Julie Kirkbride, who stood down after the parliamentary expenses scandal.

Javid got his first Cabinet job — Secretary of State for Business, Innovation and Skills — from David Cameron in May 2015 but was moved sideways by Theresa May after the Brexit referendum.

Very sad that Amber is leaving Government. A huge talent that will no doubt be back in Cabinet soon, helping to strengthen our great nation

He was appointed Secretary of State for Communities and Local Government in July 2016, a post which was retitled to include the key Housing portfolio in January this year.

But he has been targeted by Grenfell Tower campaigners who feel he has done little or nothing to help those who are still awaiting rehousing after last year's tragic fire which claimed 80 lives.

Sajid Javid is new Home Secretary. The man who recently blamed Tory Kensington and Chelsea council for the fact that only 62 out of 209 Grenfell households had moved into permanent new accommodation.

So the culture of incompetence and passing the buck continues… pic.twitter.com/F6FsRZZlWV

​Javid is known to be ambitious and might now be in a position to challenge for Downing Street if the Tories choose to dump May after Brexit in March 2019.

But he lacks Boris Johnson's charisma and might struggle to reach floating voters.

For now though he has enough on his hands sorting out the mess Rudd has left behind at the Home Office.

"After a period of damaging chaos at the Home Office we need a period of calm leadership to reassure the public and to re-establish trust," said David Jamieson, the West Midlands Police and Crime Commissioner.