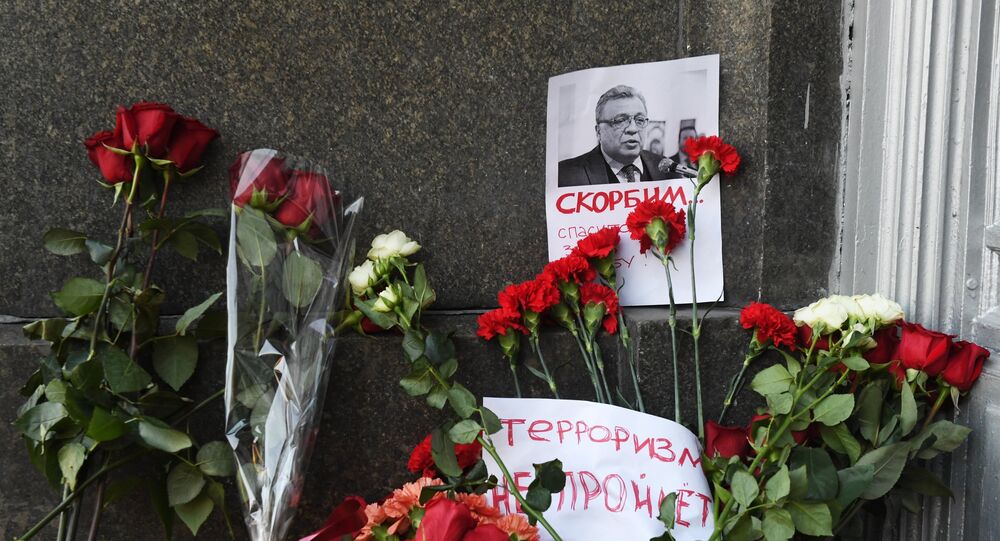 “As Vladimir Putin’s man in Turkey, Karlov was the public face of that murderous dictator’s war crimes around the globe and of oppression at home,” Kuntzmann wrote. “I, for one, am shedding no tears for Andrei Karlov.”

Kuntzmann also repeatedly compared the assassination of Karlov to the killing of Ernst vom Rath, a Nazi German embassy official shot dead in 1938 by Jewish teenager Herschel Grynszpan, while also likening Vladimir Putin, the leader of the government that Karlov served, to the infamous dictator Adolf Hitler. “Like Karlov, Rath was the public face of atrocity — in this case, Adolf Hitler's genocide, anti-Semitism and coming global aggression… [history] has vindicated Grynszpan — and, indeed, vindicated others who have fought against aggression and fought for freedom.”

While giving a welcome speech at the Ankara Center for Contemporary Art on Monday December 19, Karlov was shot nine times in the back by Mevlüt Mert Altıntaş, a Turkish police officer. The 62-year-old father of one was unarmed and unguarded, and died soon after. Altıntaş’s motivations are not yet clear, but after the murder he yelled “Don't forget Aleppo, don't forget Syria!"

The 1961 Vienna Convention on Diplomatic Relations, which nearly every country has signed and ratified, places the safety of diplomats as sacrosanct. Even in wartime, a diplomat’s task of providing reliable means of communication between nations is thought to be apolitical and crucial.

Kuntzmann, however, disagrees. “Karlov's job in Turkey was to ease tensions over Russia's atrocities in Syria and its incursions inside Turkey itself — meaning his job was to enable and normalize Vladimir Putin. Given that role, he wasn’t a diplomat, but a soldier, and his death is the same whether it came on a battlefield outside Aleppo or in an art gallery in Ankara.”

Kuntzmann’s comments have been met primarily with outrage on NYDN’s Facebook page. “Shouldn't we be sad based on the fact he was a human being who was killed on camera? For the whole world & his family? Ridiculous headline. Learn some empathy instead of selling propaganda against Russia over this tragic death,” reads one comment.

“Oh Gersh, do you just stay awake at night trying to figure out ways to be ‘controversial’ or are you really that stupid. Regardless of what he was ‘the face of’, being assassinated by an Islamic terrorist is a bad thing,” reads another.

Many readers were fast to remind the author that the US is also participating in Middle East conflicts, and American diplomats have been killed in the line of duty as well.

“I'm sure there are many in the dung pile who would have said the same about Chris Stephens.. way to "go high", sickos,” Lynn Peterson reflected.

Others went further. “You have got to be kidding me…the United States has committed human atrocities all over the place…seriously Kuntzman are you oblivious to The American war machine and what it has been doing to innocent lives for decades,” Gord Jacquie Clance charged.

The international response to the death of Andrey Karlov was a combination of outrage and support for Russia, as one of their public servants was horrifically gunned down. Besides Turkey, figures such as US Secretary of State John Kerry, Spanish Prime Minister Mariano Rajoy, French President Francois Hollande, Japanese Prime Minister Shinzo Abe, and countless others have offered Russia condolences.

Others celebrated Karlov’s death. Most prominent among them were Ukrainian nationalist politician Volodymyr Parasiuk, as well as Daesh. They have now been joined by NYDN.

Gersh Kuntzmann, who joined NYDN in 2012, is best known for a July 2016 article about AR-15 assault rifles in which he claimed that firing the weapon “gave me a temporary form of PTSD. For at least an hour after firing the gun just a few times, I was anxious and irritable.” It seems, however, that Kuntzmann may have still not recovered from his trauma, as one reader summed up after reading his article: “ Annnnnnd Kuntzman has PTSD again.”

Professional Diplomat Who Became a Terrorist's Target: Who Was Andrey Karlov?