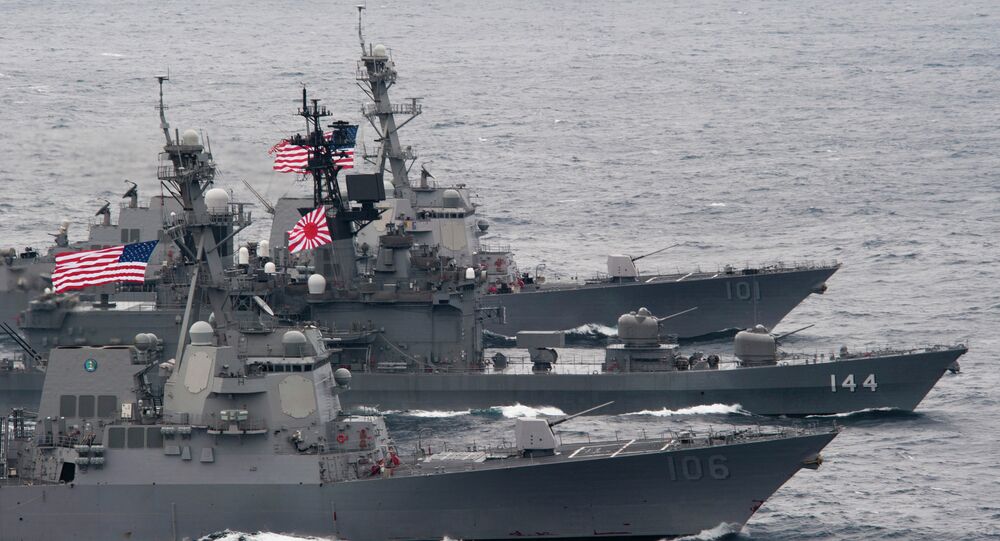 Prime Minister Shinzo Abe will be sending legislation to Japanese Parliament next month that would expand the role of the country’s Self-Defense Forces, and may subsequently lead to Tokyo’s deeper involvement in the South China Sea dispute.

The new legislation falls in line with Abe’s campaign for a more assertive military and, if passed, would allow Tokyo to provide the US with logistical non-combat support in conflicts beyond "areas around Japan." This will include supplying fuel and ammunition to American ships anywhere, if Tokyo sees a risk to its security.

The legislation has already received backing from Abe’s coalition partners, virtually assuring its passage. Considering the expanded role this would afford the Self-Defense Forces in supporting US forces, the new law could potentially drag Tokyo into action in the South China Sea.

Neither the US nor Japan have territorial claim over the highly contested territory, but the Philippines – a US treaty ally – is locked in a dispute over the area with China, meaning that the US is bound to protect Manila in the event of an attack.

Speaking to Reuters, a senior Philippines military official said Manila would welcome Tokyo’s efforts to expand operations in the disputed area under the new law.

"Since the US and Japan have an agreement,” he said, “I would not be surprised if Japan is dragged into a conflict in the South China Sea."

The area is presumed to be energy-rich, and has significant strategic value, with an estimated worth of $5 trillion in ship-bound trade passing through the waterway every year.

Tensions have been rising between Beijing and Manila, as the two parties step up their claims over the disputed Spratlys archipelago in the South China Sea. China has been ramping up its land expansion efforts in the region, drawing criticism from other claimants and the US, which have accused Beijing of using its size and military force to fortify sovereignty. The Philippines filed a diplomatic protest when it first noticed the building efforts in February.

Meanwhile, in a move that could be interpreted as a warning to Beijing, the US and the Philippines began joint military exercises this week, the largest in the past 15 years.

"If the Philippines were to clash with China, they would send an SOS to their ally the US," a Japanese military expert said to Reuters. "If the US military were then to seek assistance from the Self-Defense Forces, the question then becomes what Japan can do."

Considering the US’ involvement in the unfolding dispute in the area, the new Japanese legislation is expected to spark some intense debate and raise questions over applicability.  While there have been some cases in the past in which Tokyo has supplied logistical military support abroad, each has required a new law to be passed. This new legislation would effectively remove that requirement, thus, raising the question over which situations would require Japanese Self-Defense Force involvement.

According to Hirofumi Takeda, spokesman for Japan’s Defense Ministry, it is "impossible to debate in advance whether a specific situation is applicable" under the new law.

"A judgement would be made," he said to Reuters, "depending on the specific and concrete circumstances, as to whether it qualifies as a 'situation having a grave impact'" on Japan.