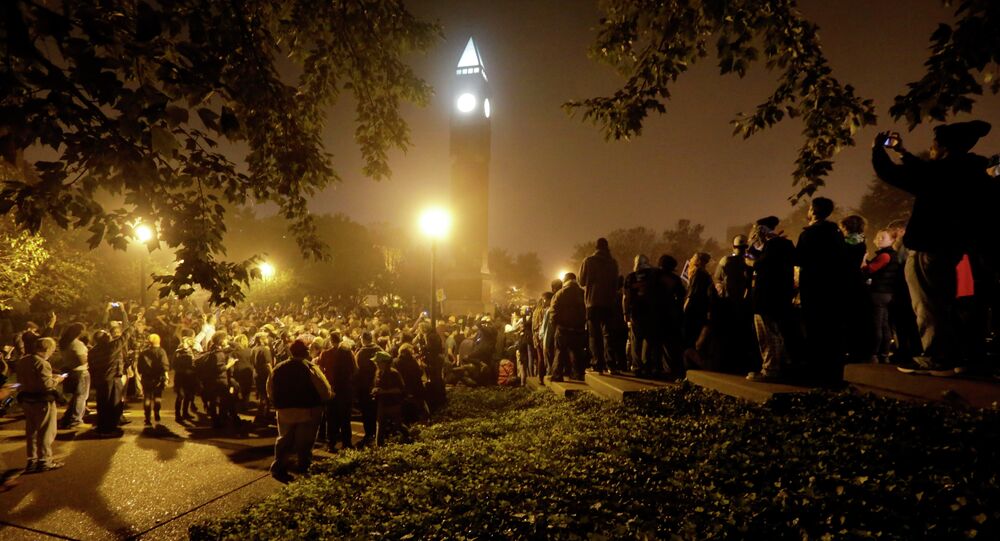 Saint Louis University has commissioned a sculpture in honor of movement “Occupy SLU” held on the school’s campus in October, 2014. The students of SLU spent a week denouncing oppression and racism following the Ferguson riots sparked by the police shooting of Michael Brown.

The statue will be erected near the clock tower in the middle of the university campus, in hopes of “capturing the spirit and importance” of these protests, according to The college Fix.

Over 1,000 young activists had taken over the urban campus, waved upside-down American flags, chanting “Hands up. Don’t shoot,” and lived in tents around its clock tower in a week long peaceful sit-in dubbed “Occupy SLU.”

Students and clergy took part in the demonstration, along with several social justice groups including, Tribe X, the Metro St. Louis Coalition for Inclusion and Equality, and the Black Student Alliance. Groups gave speeches and “teach-ins” on conscious awakening, systematic oppression, white supremacy and students’ responsibility to the community.

The movement to occupy the Jesuit institution only ended after university officials agreed to all activists’ demands, including a “increased budget for African American studies,” and a “mutually agreed upon commissioned artwork.”

Under the “Clock Tower Accords” agreement, university officials have commissioned “African American artists and sculptors Kyle and Kelly Phelps to design a sculpture that captures the spirit and importance of the demonstration and encampment at Saint Louis University on October 13-18, 2014,” according to The College Fix.

University President Fred Pestello told the news site the institution hasn’t decided on the design or location yet.

“Once we have final agreement on the nature and size of the sculpture we will begin to consider a location. The most obvious place is somewhere near the clock tower where the encampment took place,” he said.

The artists were brought to campus shortly after the sit-in ended.

“They took a tour of the campus and looked at pictures and videos of the protest. They talked to a number of people and then returned home to being to consider what type of sculpture might best capture that moment,” Pestello said.

Neither of the artists could disclose any plans for the proposed monument.

“I cannot give specific details about the monument until the board/committee(s) meets to finalize specifics about the site, initial cost, and the physical description of what this monument will ultimately look like,” Kelly Phelps told The College Fix in an email. “The committee(s)/board will choose from (several) different options and configurations that we presented that best suits the needs of the space, cost, and needs from the community.”

The sculpture is expected to be ready in 12 months.