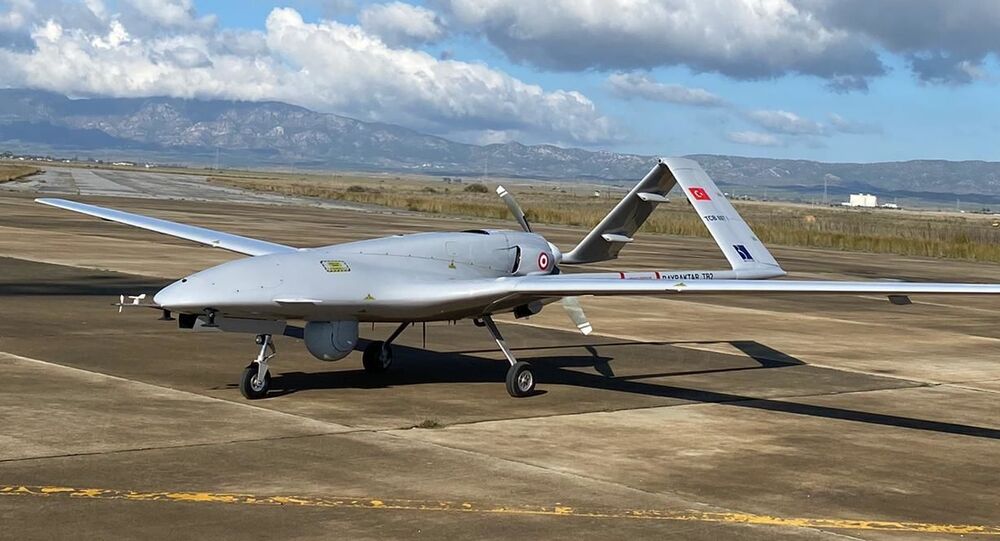 Last week, Turkish President Recep Tayyip Erdogan urged Azerbaijan to go ahead with its offensive in Nagorno-Karabakh, while Armenian Prime Minister Nikol Pashinyan accused Ankara of being directly involved in the Azeri-Armenian hostilities.

The Turkish Foreign Ministry has berated Canada for Ottawa suspending arms exports to Ankara amid a probe into the use of Canadian technology in the ongoing conflict between Azerbaijan and Armenia over Nagorno-Karabakh.

"Our expectation from Canada, is to lead a policy that stays away from double standards, to act without falling under the influence of anti-Turkish groups in the country and without being trapped by narrow political interests", the ministry said in a statement on Tuesday, in an apparent nod to current Turkish-Canadian military cooperation agreements.

According to the statement, Canada is creating obstacles related to the export of military equipment to Turkey "in a way that does not comply with the spirit of alliance".

© Sputnik / Ilya Pitalev
The town of Stepanakert in the self-proclaimed Nagorno-Karabakh Republic.

"In line with Canada's robust export control regime and due to the ongoing hostilities, I have suspended the relevant export permits to Turkey, so as to allow time to further assess the situation", Champagne said in a statement on Monday, referring to Ottawa's investigation into "certain allegations" of Canadian drone equipment being used by Azeri forces involved in fighting with Armenia.

He also pointed out that "Canada continues to be concerned by the ongoing conflict in Nagorno-Karabakh resulting in shelling of communities and civilian casualties". According to the Canadian foreign minister, measures should be taken immediately in order to "stabilise the situation on the ground and reiterate that there is no alternative to a peaceful, negotiated solution to this conflict".

This followed Turkish President Recep Tayyip Erdogan last week urging Azerbaijan to go ahead with its offensive in Nagorno-Karabakh "until all its lands" in the area "are freed".

© REUTERS / BLAIR GABLE
Canada Suspends Export Permits to Turkey Amid Nagorno-Karabakh Conflict, Foreign Minister Says
He noted that Turkey supports "friendly and fraternal Azerbaijan in all possible ways", and would continue to do so.

Armenian Prime Minister Nikol Pashinyan, for his part, told the Canadian newspaper The Globe and Mail that it was now up to Turkey's NATO allies to provide an explanation as to why Ankara is involved in the Karabakh conflict.

"Turkey's military personnel and the Turkish Armed Forces are directly engaged in the hostilities. Turkey's NATO allies must explain why these [Turkish] F-16 jets are shelling towns and villages in Nagorno-Karabakh and killing civilian populations", he said, referring to previous reports that an Armenian Air Force jet had been downed by a Turkish F-16, something that Ankara denied.

He spoke after the latest bout of fighting between Armenia and Azerbaijan over Nagorno-Karabakh began on 27 September, with each side blaming the other for resuming the shooting.

The majority-Armenian region declared its independence from Soviet Azerbaijan in 1991, which led to a major conflict between Baku and Yerevan in subsequent years. The hostilities claimed thousands of lives on both sides before Moscow managed to mediate a ceasefire deal between the two in 1994, a truce that has repeatedly been broken in the years that followed.