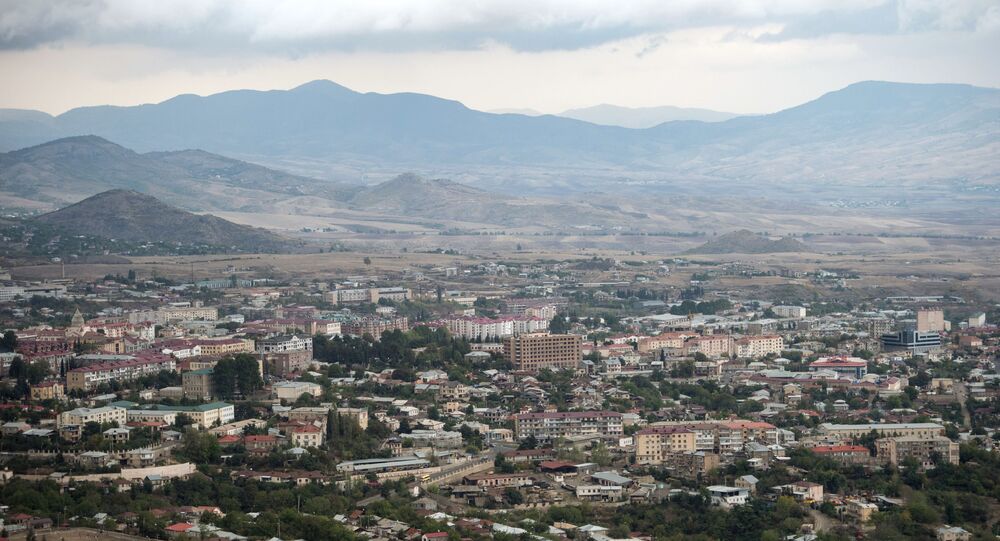 At the end of September, a fresh wave of clashes between Armenia and Azerbaijan broke out in the disputed region of Nagorno-Karabakh, with both sides accusing each other of starting the hostilities and breaking a 1994 ceasefire.

A new artillery strike has reportedly hit Stepanakert, the capital of the self-proclaimed Nagorno-Karabakh Republic, with sirens being heard across the city, as reported by Sputnik correspondent from the site. Electricity and phone connections have also been temporarily halted.

According to Armenia's Ministry of Defence representative Artsrun Hovhannisyan, the strike has resulted in civilian casualties.

"Stepanakert is again under attack, there are destruction and victims among the civilian population," Artsrun Hovhannisyan, the head of the Military Education Department of the MoD of the Republic of Armenia, wrote on Facebook.

A Sputnik correspondent reported that several buildings were damaged as a result of the shelling, with an electrical station on fire.

The Press Secretary of Armenia's Ministry of Defence later wrote on Facebook that military forces of the unrecognised republic had destroyed three aircraft and two 'enemy' tanks.

On 27 September, hostilities broke out between Armenia and Azerbaijan in the territory of the self-proclaimed Nagorno-Karabakh Republic which has an Armenian majority. Azerbaijan accused Yerevan of starting the aggression along the 'line of control' in the territory and shelling its military and civilian positions. Armenian authorities denied this and maintained that it was Baku that had violated the 1994 ceasefire by launching rocket attacks in the region. In response, Yerevan has declared martial law and total military mobilization. Baku, which is openly supported by Turkey, has introduced a curfew and announced a "partial" mobilization of its military forces.

Authorities in Nagorno-Karabakh, a self-styled republic that has been de-facto independent since 1994 but remains unrecognised by the international community, said in September that its capital Stepanakert had been shelled, with numerous houses destroyed and injuries among civilians reported.

Nagorno-Karabakh, also known as Artsakh, was a part of Soviet Azerbaijan until it proclaimed its independence from the republic in 1988. This led to major military clashes between Baku and Artsakh supported by Yerevan, which lasted until 1994, when the sides agreed to peace talks mediated by the OSCE Minsk Group, which is headed by Russia, US and France. Representatives from all three countries have urged both parties to cease hostilities and resume negotiations without pre-conditions.