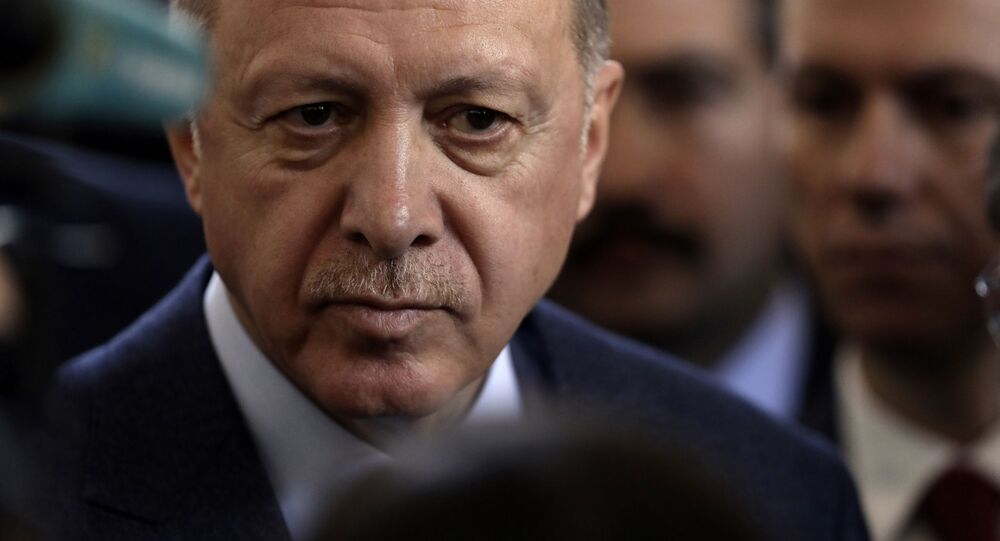 Erdogan: It's Not Acceptable for OSCE Minsk Group to Demand Ceasefire in Nagorno-Karabakh

On 27 September, fighting broke out between Armenia and Azerbaijan over Nagorno-Karabakh, a disputed territory that declared independence from what was then Soviet Azerbaijan in 1991. The international community has called for a ceasefire. Turkey, a historic ally of Baku, previously said that any attack on Azerbaijan is an attack on Turkey itself.

It’s unacceptable for the OSCE Minsk Group to now demand a ceasefire in Nagorno-Karabakh, said Turkish President Recep Tayyip Erdogan in a speech to the country’s parliament. "I want to reiterate that we, as Turkey, are siding with Azerbaijan in their struggle in Nagorno-Karabakh", Erdogan said, adding that the OSCE Minsk Group needs to demand that Armenia put an end to its "occupation" of the breakaway region.

Turkey will support Azerbaijan by any means, which is in line with the "two states, one nation" principle, the Turkish president said.

Erdogan also criticised the Minsk group, chaired by France, Russia, and the United States, for attempts to mediate a peace agreement between Yerevan and Baku saying "ceasefire calls after years of ignorance" do not make sense.

According to Erdogan, he’s held negotiations with the presidents of France, Russia, and the United States over the Nagorno-Karabakh issue, but they failed to bear fruit.

"Our brothers cannot return to their land. And if there are no results, it’s time to act”, the Turkish president said, stressing that a permanent peace will be achieved in the region only "if Armenia leaves the Azerbaijani lands it has been occupying".

Fighting between Armenia and Azerbaijan over the breakaway region broke out on 27 September, with both sides blaming each other for the start of hostilities. Since then dozens of people have been reported killed and hundreds wounded on both sides.

The conflict between the two states has lasted for decades. The Nagorno-Karabakh region is formally part of Azerbaijani territory, but the majority of the population there is ethnic Armenian. The region's decision to declare independence from Azerbaijan led to a major conflict between Yerevan and Baku.