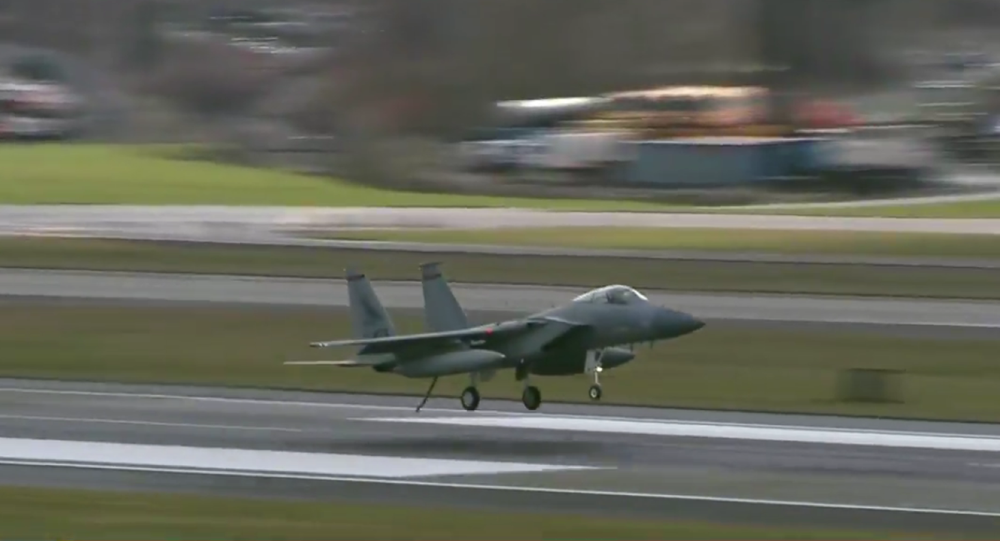 An internal report from the Oregon Air National Guard has cast new light upon a February 2019 incident in which an F-15C Eagle unloaded its entire missile complement into the Pacific Ocean before making an emergency landing.

On February 20, 2019, an Oregon Air National Guard F-15C Eagle suffered a problem with its landing gear after taking off and made an emergency landing at Portland International Airport. However, before it did so, the interceptor jet fired its missiles into the sea. Now, thanks to a Freedom of Information Act request, The Drive has revealed new information about this puzzling event.

The 15-page accident report filed in April of 2019 notes that after takeoff, the F-15 pilot noticed the plane’s left main landing gear had not retracted as it was supposed to. After running through several unsuccessful attempts to convince the wheel to retract, the pilot declared an emergency and set about preparing for an emergency landing at PDX, a joint civilian-military air base from which the Eagle had taken off.

The report notes that there was serious concern among Boeing officials contacted by the base that the F-15’s landing gear might collapse upon impact with the tarmac, especially since the pilot’s tailplane, referred to in the report as Mishap Flight Lead (MFL), had noticed the landing gear appeared to be dripping with hydraulic liquid.

However, before they could land, "the Landing Gear Emergency-Landing checklist directed the aircrew to 'Jettison armament and chaff/flares,’” the report notes. “The MF [mishap flight] obtained a clearance to the overwater airspace to prepare for the armament jettison."

Preparing for the emergency landing was not an easy process. First, the F-15 was low on fuel and Air National Guard officials weren’t sure if the plane could fly fast enough with its landing gear down to keep up with the KC-135 tanker assigned to refuel it. To add to the problems, it was cloudy and not easy to determine a safe place to fire off not only the plane’s four AIM-120C AMRAAM and two AIM-9X Sidewinder air-to-air missiles, but also its complement of defensive flares, which are used to confuse inbound enemy missiles.

“While still awaiting the armament jettison plan, the MF conducted its first aerial refueling. The MFL lowered his landing gear in order to determine if it would be possible to refuel in that configuration at an airspeed of 230 knots. Both the MFL and MP were able to refuel uneventfully,” the report notes.

By checking air traffic and shipping lane traffic data, mission supervisors were able to find a “shooting lane” 40 nautical miles long and 20 nautical miles wide in which the Eagle could fire off its armaments, which took three passes through the lane to complete.

Fortunately, the landing gear did not collapse upon touchdown, and the pilot emerged unscathed. However, the violent, wire-arrested landing caused more than a little bit of damage to the jet. Local media captured the plane’s landing in live footage from the airport terminal.

According to the report, the damage from the landing and broken gear together totaled $418,280, but did not include the cost of the missiles and flares expended. The Drive estimated their combined cost to have been at least $4.5 million.

The cause of the landing gear malfunction is redacted in the report, as are any recommendations about how to avoid it in the future or how widespread the problem is believed to be.