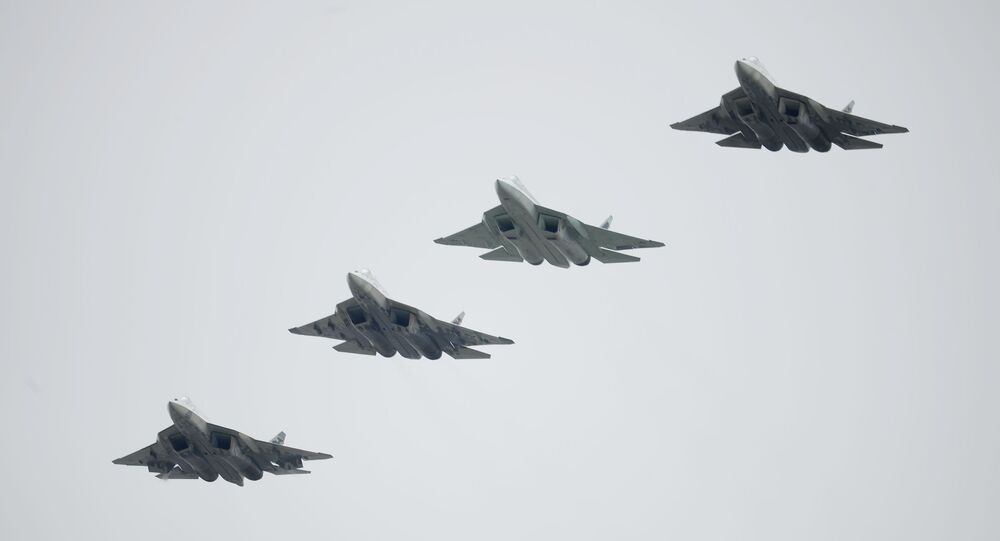 Since mass production of the Sukhoi Su-57 began last year, developers have announced a number of add-ons for the fifth-generation fighter, ranging from new hypersonic missiles to plans to allow it to control swarms of drones.

Russia’s Su-57 fighter jets are going to receive special protective cloaks to shield them from bad weather and enemy radar detection while they are on their airfields, with delivery of the cloaks set to begin next year, Izvestia has reported, citing sources in the military and the military industry.

According to the newspaper, the cloaks will be made of radar signal-reflecting polymers, with each plane will receive over a dozen separate, specially-fitted covers for its fuselage, wings, cockpit, stabilisers, air intakes, wheels and other components.

In addition to cloaking the plane, the coverings will protect the planes’ external electronics, including antennae, sensors, radar and optical and electronic systems from the elements.

Lt. Gen. Valery Gorbenko, former commander of the 4th Air Force and Air Defence Army, told Izvestia that the cloaks will deprive the potential adversary of information such as where the planes are based, how many there are, as well as where and from where they have been transferred.

The officer added that the coverings’ protective qualities are a significant bonus. “It is important to protect modern equipment from bad weather. Today planes are sometimes covered up entirely, but this provides little protection from rain or snow. In southern regions, during sandstorms, paint is stripped from planes like emery.”

Sukhoi is currently working on the delivery of 76 Su-57s for the Ministry of Defence, with state testing on the planes delivered earlier set to be completed before the end of the year.

The Sukhoi Su-57, formerly known as the ‘PAK FA’ or T-50, is a supermanoeuvrable fifth-generation strike fighter with stealth characteristics and the latest avionics and weapons systems.

Taking part in combat evaluation in Syria in 2018 and 2019, the fighter jet formally began mass production in 2019. In the meantime, developers are working on a number of upgrades, including true fifth-generation engines and a hypersonic missile designed to be fitted in its weapons bay.

© AP Photo / Pavel Golovkin
Iraq Interested in Russian Infantry Vehicles, Su-57s, Army Inspector Says
The exact price tag of the Su-57 programme is difficult to pin down. However, Russian business media reported last year that the contract with the MoD for the batch of 76 planes has an estimated cost of 170 billion rubles ($2.3 billion US), or about $30.4 million per plane. The plane’s development programme had a cost of about 60 billion 2010 rubles (about $2.8 billion).