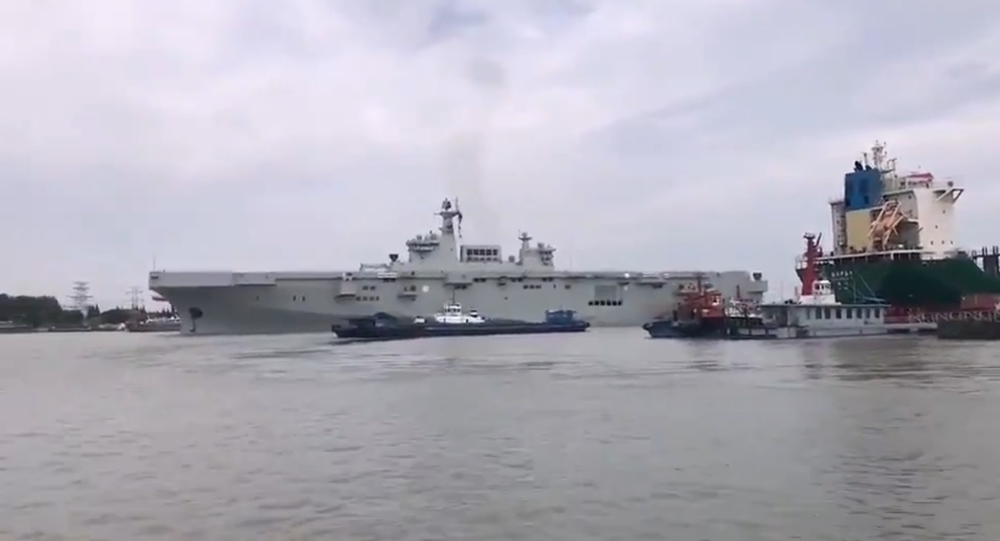 China’s first amphibious assault ship, the Type 075 landing helicopter dock (LHD), has been put to sea for the first time on Wednesday.

Photos and video on social media showed the warship being escorted away from the docks by the Hudong Zhonghua shipyard in Shanghai by tugboats on Wednesday morning, before steaming away under its own power.

​Judged to be between 35,000 and 40,000 tons displacement, the Type 075 is the rough equivalent of the US Navy’s Wasp-class amphibious assault ships. This class of warship has both a flight deck for launching helicopters or aircraft capable of vertical takeoff and landing, as well as docking facilities for launching amphibious watercraft and thousands of marines.

Chinese PLAN 075 LHD from above pic.twitter.com/GAQEAEpJrC

​Li Jie, a Beijing-based naval expert, told the Global Times that during the ship’s maiden voyage, the crew will likely test its main systems, such as propulsion, navigation, and communication.

The lead ship of what is expected to be a class of three vessels, the first Type 075 was launched from the shipyard in September 2019. Since then, it has remained moored at the dock next to the shipyard as fitting out work continued. It was later joined by a sister ship, and a third is under construction in the drydock.

In April, a fire broke out inside the ship, but it was quickly extinguished. The Global Times reported at the time the damage was minor and had not impacted the construction schedule.

According to the Global Times, the lead ship will likely not be commissioned until 2021 or 2022. It’s likely the ship will continue to be known as the Type 075 until then, as past warships have not been christened with names until their commissioning, either.

Sputnik also reported recently on a proposed modification of the Type 075, which is being called the Type 076 and would see an electromagnetic aircraft launch system installed on the flight deck for launching drones. It remains unclear if People’s Liberation Army leadership will take up the proposal, which was made by the China State Shipbuilding Corporation, the design bureau that created the Type 075.