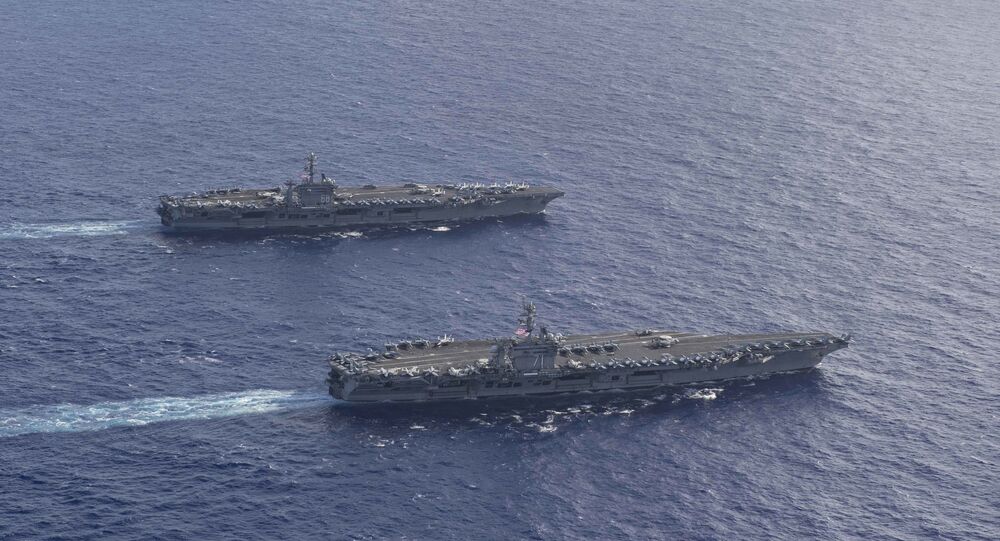 US Expands Remote Pacific Military Base Amid Regional Standoff With China: Report

In late June, a Chinese government think tank warned of a possible military conflict due to the US military’s "unprecedented" deployment to the Asia-Pacific region.

War Zone has reported about "substantial improvements" to the secretive US military base on Wake Island, described by the news outlet as “America's remote outpost deep in the Pacific”.

“The major expansions to the [Wake Island] airfield began early this year and are still underway today”, War Zone said, referring to new satellite imagery that it obtained from the private American imaging company Planet Labs.

The improvements include a large apron expansion on the eastern side of the airfield, construction in the support area to the north, and a complete rebuilding of the runway.

War Zone editor Tyler Rogoway pointed to Wake Island’s “key fallback position” in case of a possible armed conflict with China, which he said would almost certainly affect a key US naval base on the island of Guam.

The reported expansion of the Wake Island base comes amid an ongoing standoff between Washington and Beijing in the Asia-Pacific region as the sides continue sending warships to the area for naval drills.

On Saturday, American strike group commander Rear Admiral George M. Wikoff was cited by The Wall Street Journal as saying that the US Navy is sending two aircraft carriers, the USS Nimitz and USS Ronald Reagan, to the South China Sea to take part in war games.

The deployment followed the Chinese Foreign Ministry rejecting the US Department of Defence’s crtiticism of Beijing’s own drills in the South China Sea, which the ministry said are being conducted in sync with the country’s sovereignty.

© Photo : Petty Officer 3rd Class Zachary / US Navy
An E/A-18G Growler, assigned to the “Gray Wolves” of Electronic Attack Squadron (VAQ) 142, launches from the flight deck of the aircraft carrier USS Theodore Roosevelt (CVN 71) June 17, 2020. The Theodore Roosevelt Carrier Strike Group is on a scheduled deployment to the Indo-Pacific.

US Secretary of State Mike Pompeo slammed the exercises as “highly provocative”, adding that Washington “opposes Beijing's unlawful claims [to the South China Sea]”. Apart from China, territories are claimed by the Philippines, Vietnam, Brunei, Malaysia, and Taiwan. The US, in turn, challenges Beijing by carrying out “Freedom of Navigation” missions in the area, angering China which rejects such operations as “provocations".

In late June, Wu Shicun, head of the National Institute of South China Sea Studies, a Chinese government think tank, called the US military deployment in the Asia-Pacific region “unprecedented”.

He argued in an interview with the AFP news agency that “the possibility of a military incident or an accidental shot fired [in the region] is rising”.

© AFP 2021 / Guang Niu
US May ‘Suffer Capital Losses’ in Possible War With China in Pacific
According to Wu, the US has deployed around 375,000 soldiers and around 60% of its warships to the region, including three of its aircraft carriers.

He underlined that China does not “envisage a new cold or hot [war] with the US” but warned that “deteriorating military relations would substantially increase the possibility of a dangerous incident, a conflict, or even a crisis”.

He added while the Indo-Pacific deployment isn’t something the US will be able to sustain permanently, “it’s something we can do when we want to”.

In late 2019, Washington voiced concern over the growing capabilities of the People’s Liberation Army Navy (PLAN) in the Pacific after the size of the Chinese Navy reportedly outstripped that of the US by about 300 ships.

The Pentagon responded to the shifting balance of forces by ordering new classes of anti-ship missiles, introducing the concept of mini-carriers, and proposing the downsizing of strike groups.