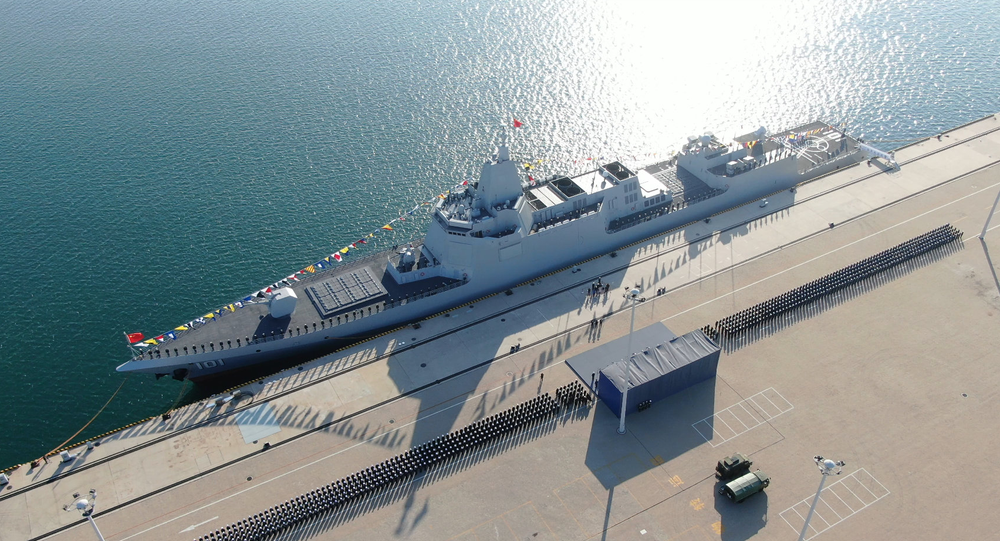 The Chinese navy is now in possession of the largest missile destroyer in Asia and the second-largest in the world, following the commission of the Type 055 destroyer Nanchang on Sunday.

The Nanchang officially joined the People’s Liberation Army Navy (PLAN) in a Sunday ceremony in Shandong’s port city of Qingdao, Xinhua News Agency reported. The advanced warship completed its final testing last year and has been working with the fleet since it was launched in 2017.

“Nanchang made an appearance at the parade as part of the celebration, but much of its equipment – including radars, communications and weapons systems and other works – had not actually been finished,” a PLA insider told the South China Morning Post about the warship’s participation in April 2019 celebrations commemorating the 70th anniversary of the PLAN’s founding.

The PLA insider told SCMP the timing was carefully chosen to fall after the Taiwanese elections on Saturday, which was “the military’s preferred date,” so as not to be seen as attempting to influence them.

NATO calls the Type 055 guided missile destroyers the “Renhai-class” and considers them to be cruisers, not destroyers, since they can perform command functions. Whatever you call it, the warship is highly advanced and very big.

Weighing in at 13,000 tons of displacement, the 180-meter-long Type 055 is the largest such warship in Asia and the second-largest in the world after the US Navy’s Zumwalt-class destroyers, which are slightly larger at about 15,000 tons. That’s nearly one-third larger than the US Navy’s staple destroyer, the Arleigh Burke-class, and twice the size of Russia’s Sovremenny-class destroyers. It has an estimated 30-knot top speed, according to Jane’s, roughly comparable to the other two warships.

According to The Diplomat, Nanchang can carry up to 112 vertical missile launch systems able to deploy some of the PLAN’s deadliest projectiles, including the YJ-18 long-range anti-ship missile, CJ-10 cruise missile and HHQ-9 anti-air missile, which Military Today judges to be “broadly equivalent” to Russia’s S-300 system.

In addition, the Type 055 will have a powerful anti-ship and anti-submarine warfare helicopter at its disposal in the form of a naval version of the Z-20 helicopter.

The PLAN has five other Type 055 destroyers, the most recent of which was launched on December 26, 2019.

#MILITARY- #China's type 055 destroyer has been commissioned into service at #Qingdao port, marking the upgrade from third to fourth generation naval destroyer capability for ‘the ever evolving plan. ‘ pic.twitter.com/EaC033Fkin

​It features the latest version of the Type 346 active electronically scanned array (AESA) radar, operating in the S-band, similar to the US Navy’s AEGIS systems. As a consequence of its lower frequency, the Type 346 radar is rumored to be able to detect stealth aircraft, which are optimized to hide from higher frequency radars in the X- and Ku-bands, according to USNI.

However, the Diplomat notes that as the first ship in its class, Nanchang suffers several design flaws, such as a poorly positioned radar system limiting its range and the use of aluminum alloy in the ship’s upper decks, reducing its ability to survive naval combat.

China’s PLAN is rapidly modernizing its fleet. As Sputnik reported, the PLAN commissioned five new warships in December 2019 alone, not counting the Shandong, turning the service into what a recent Congressional Research Service report described as “a formidable military force” capable of “conducting a growing number of operations in more-distant waters, including the broader waters of the Western Pacific, the Indian Ocean, and waters around Europe.”

The US Defense Intelligence Agency’s (DIA) 2019 China Military Power report noted that with the debut of the Type 055 destroyer, “the era of past designs has given way to production of modern multimission destroyer, frigate, and corvette classes as China’s technological advancement in naval design has begun to approach a level commensurate with, and in some cases exceeding, that of other modern navies.”

“Once operational, the new Renhai class (Type 055) guided-missile cruiser, of which several are currently under construction, will be one of the most advanced and powerful ships in the world, boasting a large array of advanced-capability weapons and sensors developed domestically,” the DIA report continues.

“Shipboard air defense and antisurface warfare capabilities are arguably the most notable areas of improvement on PLAN surface ships,” the report notes. However, despite closing the gap, Beijing is still planning for a conflict with the US in which its own technologies and capabilities remain somewhat inferior. The Type 055 plays into that strategy, which focuses on anti-access/area denial by making it too dangerous for US naval forces to operate within striking distance of the Chinese mainland.

The DIA report notes the HHQ-9 missile’s extended range is roughly 150 kilometers, and that the PLAN would deploy the warship off the coast as an extension of land-based deterrents to sea and air attack, using “modern combat management systems and air surveillance sensors, such as the Sea Eagle and Dragon Eye phased-array radars. These new units allow the PLAN surface force to operate outside shore-based air defense systems because one or two ships are equipped to provide air defense for the entire task group.”