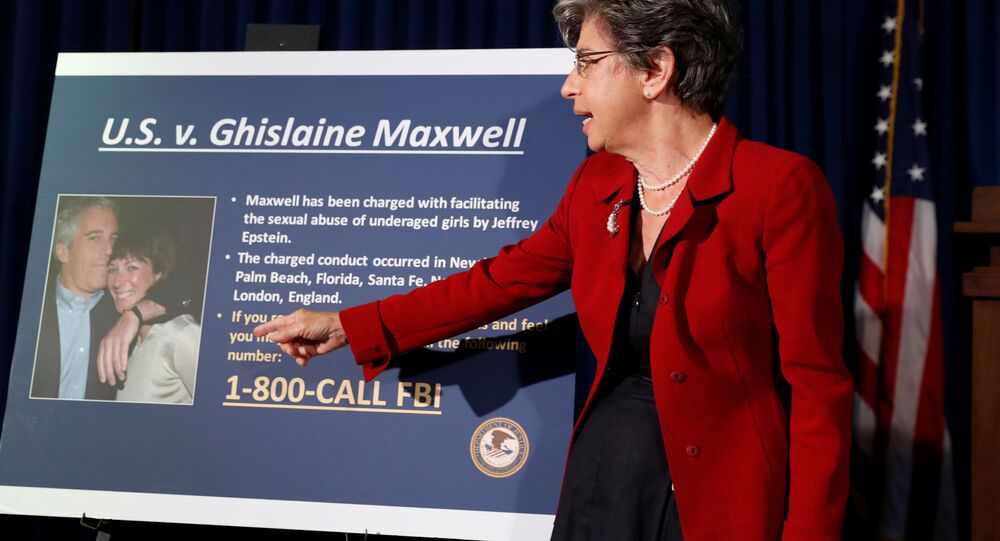 Ghislaine Maxwell, British socialite and former partner of convicted sex offender Jeffrey Epstein, has been arrested by the Federal Bureau of Investigation, and is expected to appear in federal court before the day is out.

The shock development comes almost a year after Epstein was arrested on charges he abused and trafficked women and girls in Manhattan and Florida 2002 – 2005. Epstein, a former friend of Presidents Donald Trump and Bill Clinton, as well as Prince Andrew, pleaded not guilty, and was found dead in his Manhattan jail cell the next month after his arrest.

Following Epstein’s arrest, Maxwell appeared to vanish without trace, her whereabouts unknown apparently even by her lawyers, her sole means of communication with courts in a number of legal actions brought against her by Epstein's victims. While she has consistently denied playing any role, witting or unwitting, in her partner’s wide-ranging and long-running criminal conspiracy, dozens of women allege Maxwell recruited them when they were underage or very young to act as sexual servants for Epstein, and a number of legal actions brought against her have been settled in the litigants’ favour.

The Maxwell indictment - where she groomed minors for Epstein - focuses on the years 1994-1997.

[I'll later thread why the years are important...]

The charges arise from Maxwell’s alleged role in “the sexual exploitation and abuse of multiple minor girls” by Epstein – and strikingly, they relate to 1994–1997, in other words several years before her partner’s own charges.

During this period, Maxwell is said to have “assisted, facilitated and contributed to Epstein's abuse of minor girls” by, among other things, “helping Epstein to recruit, groom and ultimately abuse victims known to Maxwell and Epstein to be un the age of 18”, with some victims as young as 14 when they were “groomed and abused” by the pair.

As part of their scheme to abuse minors, Maxwell and Epstein "enticed and caused minor victims to travel to Epstein's residences in different states, which Maxwell knew and intended would result in their grooming for and subjection to sexual abuse”. Maxwell employed “a variety of means and methods” to groom target minors – she would first befriend desired victims prior to their abuse, gaining their trust and asking them about their lives, schools, families and more. Victims would then typically be treated to outings, such as the movies or luxury shopping malls.

SDNY just announced the Ghislaine Maxwell case - like the original Epstein case - is staffed by the Public Corruption Unit.

I worked at SDNY and did sex trafficking cases. They do NOT run out of Public Corruption - unless there is some potential angle against a public official.

​Having developed a rapport, Maxwell subsequently normalized sexual abuse with targeted minors by, among other things, “discussing sexual topics, undressing in front of the victim, being present when a victim was undressed, and/or being present for sex acts involving the victim and Epstein”.

“Maxwell's presence during victims' interactions with Epstein, including interactions where the minor victim was undressed or that involved sex acts with Epstein, helped put the victim at ease because an adult woman was present. For example, in some instances, Maxwell would massage Epstein in front of a minor victim. In other instances, Maxwell encouraged minor victims to provide massages to Epstein, including sexualized massages during which a minor victim would be fully or partially nude. Many of those massages resulted in Epstein sexually abusing the minor victims,” the indictment states.

In addition, Epstein offered to help victims by paying for travel and/or educational opportunities, within Maxwell encouraging them to accept the assistance. As a result, victims were made to feel indebted, and believed the pair were trying to help them for benign purposes.

“Through this process, Maxwell and Epstein enticed victims to engage in sexual activity with Epstein. In some instances, Maxwell was present for and participated in the sexual abuse of minor victims. Some such incidents occurred in the context of massages, which developed into sexual encounters…Victims were groomed and/or abused at multiple locations [owned by Epstein], including a multi-story private residence on the Upper East Side of Manhattan, an estate in Palm Beach, Florida, a ranch in Santa Fe, New Mexico, and Maxwell’s residence in London,” the indictment continues.

Maxwell herself is charged with engaging in criminal sexual activity with three individuals – dubbed Minor Victim-1, 2 and 3.

Maxwell met Minor Victim 1 when she was 14-years-old, subsequently interacted with her on multiple occasions at Epstein's residences 1994–1997, and groomed her to engage in sexual acts through multiple means.

rather suggest not. Will she turn on Trump to get off? Or will there be an unfortunate accident? Watch out too “Prince” Andrew as the charges include “Between in or about 1994 and in or about 1995, when Minor Victim - 3 was under the age of 18, MAXWELL 2/3

​Maxwell met Minor Victim-2 in 1996 at Epstein's residence in New Mexico, when she was under the age of 18, and had flown to the ranch from out of state at Epstein's specific invitation. That same year, Maxwell allegedly provided her with an unsolicited massage, during which Minor Victim-2 was topless.

Maxwell groomed and befriended Minor Victim-3 in London, England between approximately 1994 and 1995, and is said to have been aware Epstein engaged in sexual activity with her on multiple occasions.

The perjury charges relate to Maxwell having “repeatedly lied about her conduct”, in an effort to conceal her crimes when testifying under oath in 2016, at the Southern District Court of New York.

The testimony in question arose from a legal action brought in 2015 by Virginia Giuffre, previously known as Virginia Roberts, who met Maxwell at Donald Trump's Mar-a-Lago Club in Palm Beach, Florida. She claims Maxwell then introduced her to Epstein, after which she was "groomed by the two [of them] for his pleasure, including lessons in Epstein's preferences during oral sex". The case was settled May 2017 in Giuffre’s favour, and while details of the settlement have not been made public, Maxwell reportedly paid out millions to Epstein’s victim.

Maxwell is alleged to have first made “knowingly made false material declarations” while testifying 22nd April 2016.

Q: Did Jeffrey Epstein have a scheme to recruit underage girls for sexual massages?

A: I don’t know what you’re talking about.

Q: List all the people under the age of 18 that you interacted with at any of Epstein's properties?

A: I'm not aware of anybody I interacted with other than obviously [the plaintiff – Virginia Guiffre] who was 17 at this point.

Precisely three months later, Maxwell is accused of perjuring herself yet again.

Q: Were you aware of the presence of sex toys or devices used in sexual activities in Mr. Epstein's Palm Beach House?

Q: Do you know whether Epstein possessed sex toys or devices used in sexual activities?

A: I wasn't aware he was having sexual activities with anyone when I was with him other than myself.

Q: I want to be sure I'm clear. Is it your testimony in the 1990s and 200s, you weren't aware Epstein was having sexual activities with anyone other than yourself and the blond and brunette on those few occasions when they were involved with you?

A: That is my testimony, that is correct.

Q: Is it your testimony you've never given anybody a massage?

A: I haven't given anyone a massage.

Q: You never gave Epstein a massage, is that your testimony?

A: That is my testimony.

Q: You never gave [Minor Victim-2] a massage is your testimony?

Alleged Epstein Victim Claims She Was Forced to Have Sex With Ex-Israeli PM, Court Filings Suggest