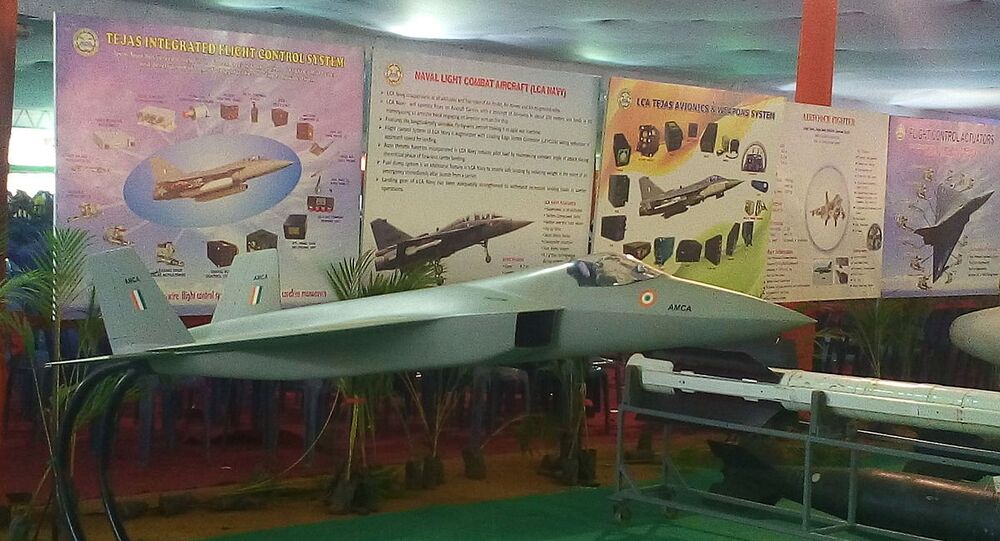 New Delhi (Sputnik): Earlier this year, the head of the IAF announced the abandonment of a joint project with Russia to produce India’ own fifth generation fighter aircraft. India is spending less on research; a paltry 1/12 on R&D what was spent by its arch-rival China this year.

The Indian Defence Ministry has admitted before a parliamentary panel that a shortage of funding has been severely harming country’s crucial military projects, including Advanced Medium Combat Aircraft (AMCA).

The ministry added that the DRDO – the state-funded agency responsible for military research and development – needs additional funds to take up new projects in futuristic areas, and high-cost projects.

“The quantum of funds for projects is INR 35,000 million ($491 million approx.) (excluding strategic schemes), which would be consumed to meet the already committed project expenses,” the defence ministry admitted.

The projects that will be impacted due to a shortage of funds include Advanced Medium Combat Aircraft (AMCA), Airborne Warning & Control System, the Ghatak combat drone, and the next-gen main battle tank.

Even the availability of funds for the research on military projects continues to decline, as pay and allowances and other non-salary revenue expenditures essentially keeps growing every year. “The amount left for R&D activities is far less,” the ministry stated, expressing concern.

In 2018, the government sanctioned $60 million for a detailed design phase, and DRDO aimed to fly the first prototype of the Advanced Medium Combat Aircraft (AMCA) before 2025.

“As for AMCA, it certainly seems to be back [on the agenda], but AMCA will take much longer to develop than is being currently projected,” said Amit Cowshish, former financial advisor to the Indian finance ministry.

Expressing apprehension about the slow progress of several projects, the IAF chief, on 16 December, said: “Right now, amid this ‘Make in India’ and indigenisation (programme), a lot of lip service is being done. Our intentions are very good but practically, the work is going on extremely slowly.”

The IAF chief mentioned that the service branch with135,000 personnel, would require at least 300 jets, including the AMCA, over the next 16-18 years.

It's Time to Cut to the Chase

Earlier this year, China’s state-run media Global Times reported that China has already started work on developing a sixth-generation fighter jet and aimed to make it a reality as early as 2035. China already has a fifth-generation fighter – the J-20 stealth fighter, which is reportedly  a top-of-the-line stealth aircraft, operated by the People's Liberation Army Air Force since last year.

The reason for such swift development lies in spending massively on military research by China.

Indicating the reasons for trailing far behind China in development of defence projects, the ministry noted that comparison to defence funding in countries such as the US, Russia, and China, India’s research and development spending is very limited.