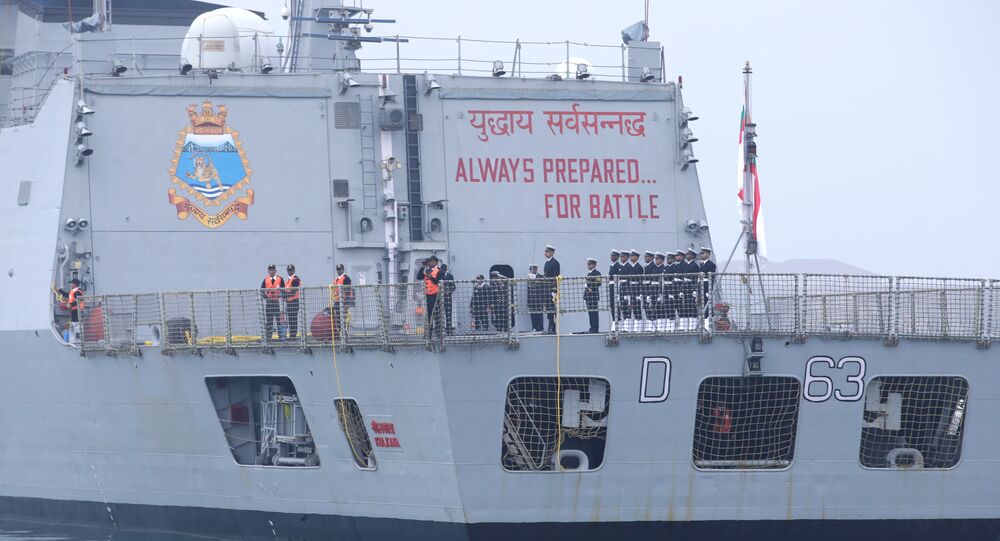 The test enables India to share sensor data on air targets, including incoming enemy aircraft and cruise missiles, in real time. The Barak-8 is a supersonic surface-to-air missile with a range of 70-100 km.

New Delhi (Sputnik) — In a significant milestone, the Indian Navy has conducted the maiden co-operative engagement test of the medium range surface to air missile (MRSAM), a ship-based version of Israel's Barak 8 missile, which is also a preferred anti-missile defence weapon of the navy.

The Cooperative Engagement Capability allows combat systems to share unfiltered sensor measurements data associated with tracks with rapid timing and precision to enable the battlegroup units to operate as one.

© AP Photo / Rafiq Maqbool
Indian Navy Scouts for Global Partner for $5Bln Anti-Mine Vessels Project
The firing was carried out on the Western Seaboard by Indian Naval Ships Kochi and Chenna. The missiles of both ships were controlled by one vessel to intercept different aerial targets at extended ranges.

​The firing trial was carried out by the Indian Navy, Defence Research and Development Organisation (DRDO), and Israel Aerospace Industries.

"With the successful proving of this cooperative mode of engagement, the Indian Navy has become a part of a select group of Navies that have this niche capability. This capability significantly enhances the combat effectiveness of the Indian Navy thereby providing an operational edge over potential adversaries," the Indian Navy stated following the firing of the missile.

The Indian Navy added that the successful test is the result of sustained efforts by all stakeholders over the years. The state-funded DRDL Hyderabad, a Defence Research and Development Organisation Lab, jointly developed this missile in collaboration with Israel Aerospace Industries.