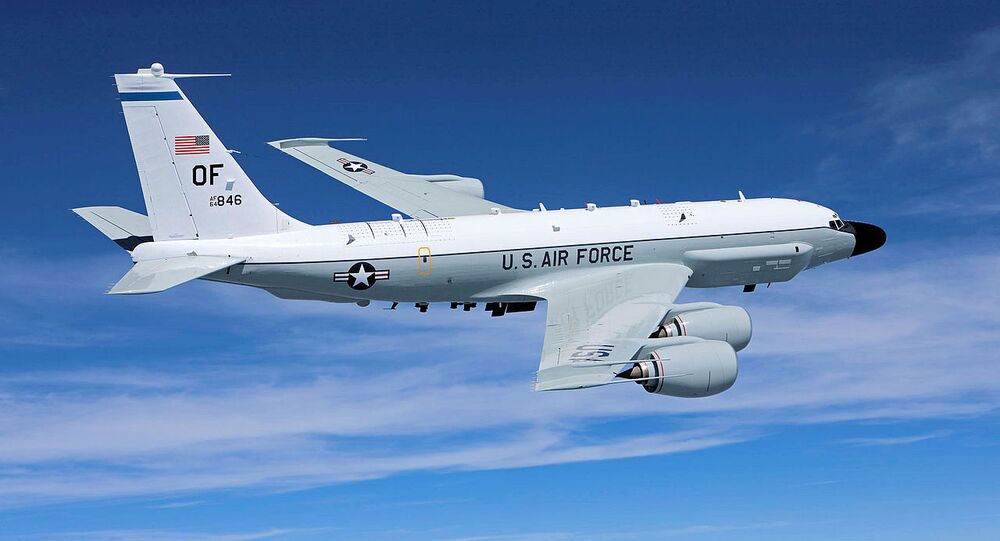 Wednesday's flight was the third time a US recon aircraft was spotted near Russia's southern borders in less than 24 hours.

A US Air Force Boeing RC-135V large reconnaissance aircraft based in Crete, Greece made its way into the Black Sea this morning, coasting along the Russian maritime border in the Krasnodar region  before making its way around the Crimean peninsula, online aircraft monitoring resource PlaneRadar has reported, citing the plane's transponder data.

Prior to making its way to the Russian maritime border, the aircraft was joined by a Boeing KC-135R Stratotanker for refueling in the southwestern Black Sea.

The plane was the third US aircraft to be spotted carrying out reconnaissance operations around southern Russia in less than a day's time. On Tuesday afternoon, a USAF RQ-4B-40 Global Hawk took off from a base in Sicily, Italy, flying near Russia's borders in Crimea, Krasnodar, and eastern Ukraine's Donbass region.

The drone was itself joined by a P-8A Poseidon patrol plane, which made several loops around western Crimea and Krasnodar.

The US and NATO have substantially increased their reconnaissance operations along Russia's borders in the Black and Baltic Seas, as well as around Russian military facilities in Syria, in recent years. Over the past year alone, the Russian military's reconnaissance forces tracked roughly 3,000 foreign combat aircraft, including about 1,000 of them spy planes and reconnaissance drones, flying near Russia's maritime and land border. Over the same period, Russian planes were scrambled repeatedly to intercept some of these aircraft and force them to change course.

© AFP 2020 / EPA PHOTO/PA/TIM OCKENDEN
US B-52 Turns Around After Being Spotted by Russian Air Defences in Baltic Sea
Earlier this month, Crimean lawmakers urged Washington to stop "spying" on the peninsula, saying that the regular flights of US reconnaissance aircraft near Crimea's borders were a cause for concern.

Tensions between Russia the US escalated to levels unseen since the Cold War in 2014 over the Ukrainian crisis, sparked by the US and EU-backed coup d'état in Kiev. The crisis resulted in the US and its NATO allies considerably beefing up their presence along Russia's borders in Eastern Europe, including the deployment of a troop permanent presence in the Baltics and Poland, large scale military exercises, and the construction of missile defence shield components in Poland and Romania which Moscow has warned could be used for offensive purposes.

Russia Detected 22 Foreign Spy Jets Near Airspace Over Past Week