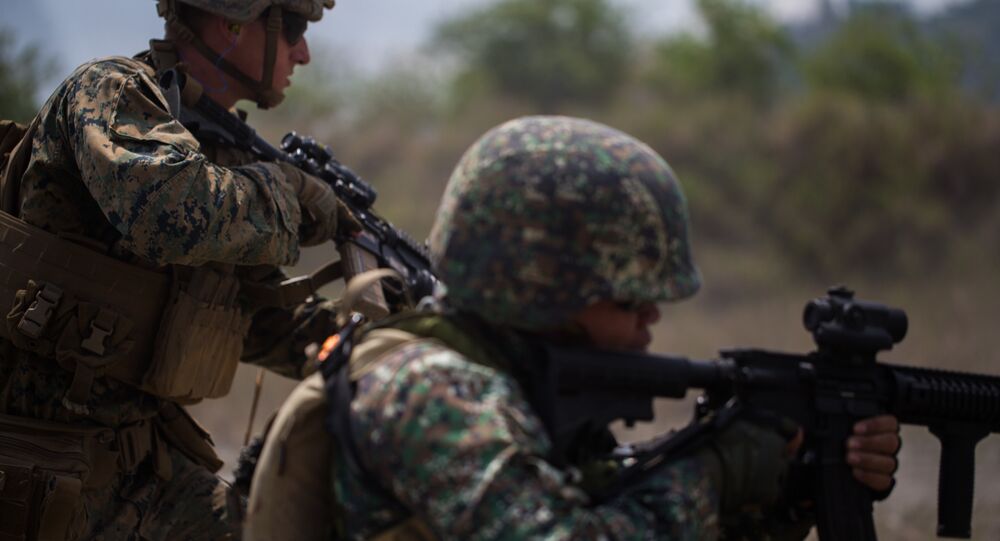 Troops from the US and the Philippines recently conducted their first joint airfield seizure drill, practicing a real world situation in which a foreign power attempts to capture one of Manila's islands in the South China Sea.

The drill, part of the annual Balikatan exercises, was carried out on Lubang Island, one of the largest isles that make up the Lubang island group in the Philippines' Occidental Mindoro province.

"If they [Filipinos] were to have any small islands taken over by a foreign military, this is definitely a dress rehearsal that can be used in the future," Major Christopher Bolz, a US Army special forces company commander who took part in planning for the exercises, told Channel News Asia.

"I think the scenario is very realistic, especially for an island nation such as the Philippines."

Lieutenant-Colonel Jonathan Pondanera, commander of the exercise control group with the Armed Forces of the Philippines Special Operations Command (AFP-SOCOM), told the outlet that military officials called for an invasion scenario for the 2019 drills after realizing during a review that "this is one of the [training] gaps" felt by Philippines forces.

"The Armed Forces of the Philippines must be ready to any eventualities," he said.

This year's exercises come at a time when China has been increasingly demonstrating its dominance in the disputed South China Sea, building aggressively on its territorial claims there, though most are disputed and international law has found no basis to Beijing's claims of ownership.

Most recently, the Philippine government issued a statement condemning the presence of a large number of Chinese vessels near its Thitu Island. Although the island has been administered as part of the Philippines' Kalayaan municipality since June 1978, China, Taiwan and Vietnam claim it as their own. The island is the second largest of the naturally-occuring Spratly Islands.

Government officials noted that between January and March 2019, more than 200 Chinese vessels were spotted near the contested island, a tactic described by the Philippine government as "swarming."

During its own observations of the region, the Asia Maritime Transparency Initiative found that at one point, nearly 100 Chinese ships, composed of carriers from the People's Liberation Army-Navy, Coast Guard and fishing ships, were strategically stationed near the disputed island.

Aside from both US and Filipino forces participating in the Balikatan exercises, which kicked off April 1 and concluded April 12, officials of the Australian Defense Force joined in for humanitarian and civic assistance projects, according to a statement from the US Marine Corps.

"The 35th iteration of Exercise Balikatan is aimed at improving both AFP and US Forces' interoperability through trainings that are focused on mutual defense operations and counterterrorism. The goal of such is to enhance both militaries' employment of forces and assistance in the event of crises that threaten the safety and security of the nation," Lt. Gen. Gilbert Gapay, Philippines exercise director, said in a release.

The 2019 drills also included live-fire training, counterterrorism training and amphibious operations, among others. This year's operations also marked the first time that the troubled F-35 stealth fighter joined in the 12-day training sessions.