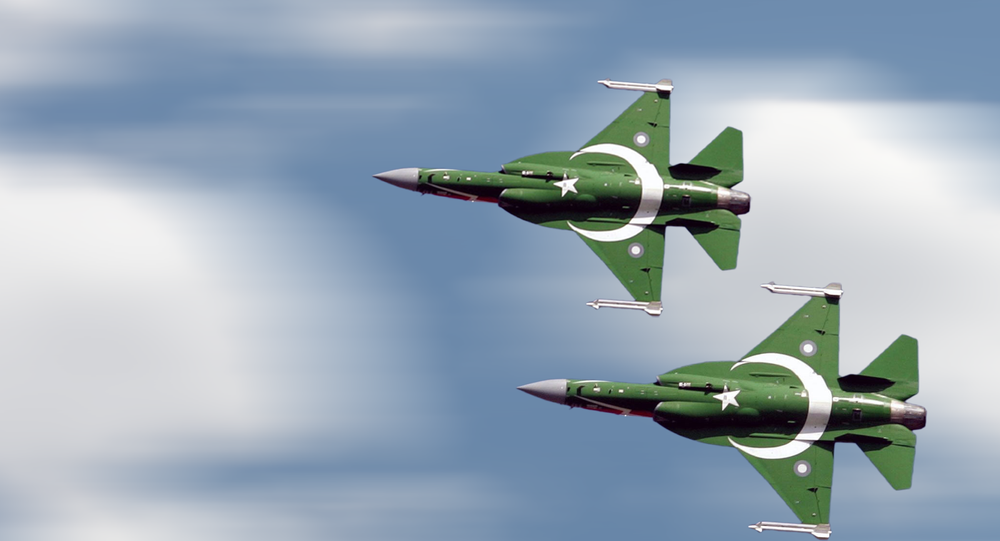 The JF-17 Thunder, jointly developed by Pakistan and China, is getting some new upgrades that will make the tactical aircraft all the deadlier. The news comes amid claims by Islamabad that it was a JF-17 that India shot down last month, not a US-made F-16, as well as a successful smart missile test by the Pakistan Air Force using the jet.

"All related work is being carried out," on the JF-17 Block 3 upgrades, Yang Wei, a Chinese legislator who is also the jet's chief designer, said at a press conference last Friday. The upgrades will includes an active electronically scanned array (AESA) radar as well as a new helmet-mounted display and sight system for the pilot, enabling them to aim by looking around, Beijing-base military analyst Wei Dongxu told the Global Times on Monday.

The addition of AESA gives Pakistan the ability to compete with India's new domestically produced Tejas MK-1, which also sports the advanced radar, Sputnik reported. With AESA, the JF-17 can scan the skies as well as the ground for many targets at once and at many frequencies, whereas more traditional pulse-doppler radars have to be pointed and can only scan at a single frequency, making them much easier to jam.

The plane will also get computer and communications upgrades that will enable pilots share information quickly — what Wei called "informatized warfare."

Since the new Thunders use basically the same airframe as the previous model, Wei said there won't be any delays in manufacturing, and the additions can be fitted quickly to the new jets.

First introduced in 2007, the JF-17 Thunder is also called the CAC FC-1 Xiaolong, or "Fierce Dragon," as it was jointly produced by the Pakistan Aeronautical Complex (PAC) and the Chengdu Aircraft Corporation (CAC) of China.

The fifth-generation multi-role attack jet has been floated as a competitor to others such as India's Tejas F-1, South Korea's FA-50 and the United States' F-16; the Global Times noted the Malaysian Royal Air Force is presently weighing precisely those options. The blog The Aviationist noted that at between $25 and $32 million each, the advanced JF-17 can compete with the F-35 as an export model, too, and being produced in far greater numbers makes it all the deadlier.

Also on Wednesday, the Pakistan Air Force announced that a JF-17 had successfully test-fired an indigenously developed smart missile, Sputnik reported, saying a "successful trial has provided JF-17 Thunder a very potent and assured day and night capability to engage a variety of targets with pinpoint accuracy."

Asif Durrani, Pakistan's former ambassador to Iran and the United Arab Emirates, told Sputnik for a Wednesday article that it had been a JF-17, and not a US-made F-16, that the Indian Air Force shot down late last month near the Line of Control that separates the Indian-controlled and Pakistani-controlled parts of the contested Jammu and Kashmir province. Under the terms of its agreement with Washington, Pakistan can only use the F-16s it purchased for strikes against terrorist forces and not in engagements with India's military.

Pak Ex-Envoy on Dogfight With India: We Used JF-17 Jet Made Jointly With China