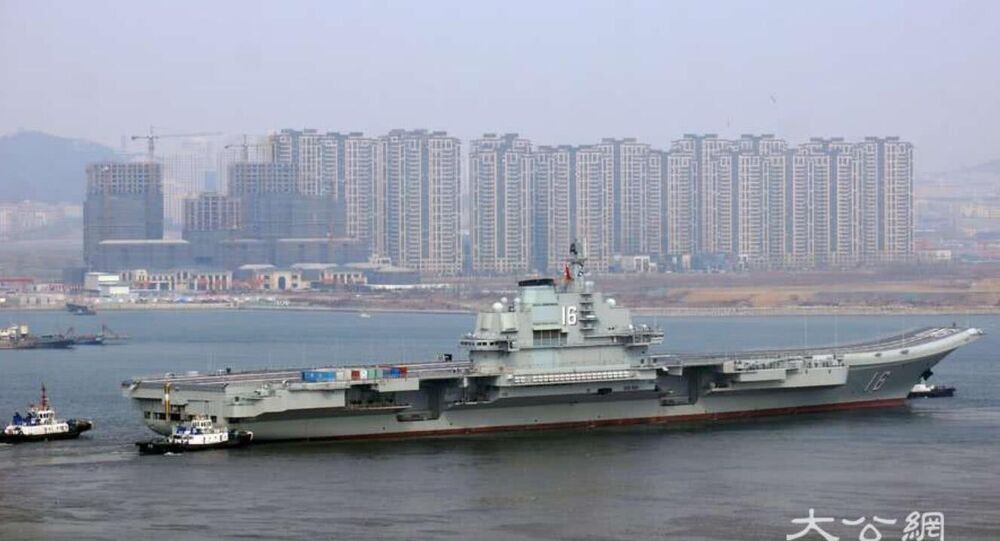 Chinese authorities said Wednesday that parts of the Yellow Sea will be closed to traffic next week while the as-yet-unnamed aircraft carrier Type 001a and its progenitor, the carrier Liaoning, conduct their first tests together.

© AP Photo / Kin Cheung
China Expects Number of New Generation Weaponry to Arrive in 2019 - Report
From March 3 through March 6, folks seeking to pass through parts of the Yellow Sea, which sits between parts of China and the Korean Peninsula, will need to make other plans: The Liaoning Maritime Administration said there will be a "no-go" zone there, to be used for "military purposes," the South China Morning Post reported.

Both ships have new capabilities to test out. The Type 001a is undergoing its final set of sea trials before its highly anticipated commissioning in time for the 70th anniversary celebrations of the founding of the People's Liberation Army-Navy, and the Liaoning is putting to sea for the first time since August 2018, when the reconstruction of its command center began.

Changes on the superstructure of CV Liaoning after refitting except those which are easily can be found like enlarged windows and newly painted hull number, one should note the EW equipment on second floor was replaced by one with large plates. pic.twitter.com/8nGwfxKNeJ

​China's Global Times reported Sunday that the Liaoning had put to sea amid fireworks-laden fanfare in the northern city of Dalian. The paper speculated the ship would return to its home port of Qingdao, Shandong, after testing out its new gadgets.

"Farewell to the Liaoning and wish it all the best on its new journey," read a banner in the shipyard, the Hong Kong-based Wei Wei Po newspaper reported.

… and again two more! And following the banner, which wishes some sort of good bye, it can be assumed, that the Liaoning's refit and sea trial is completed and after this trail, she should be reassigned to her home port soon. pic.twitter.com/tkYBCg0ct3

​Observers noted changes to the Liaoning's superstructure designed to update it along the lines of the much newer Type 001a, including enlarged and better-placed windows and a larger communications dome, along with a host of other changes.

The 58,000-ton Liaoning began life as the Soviet Union's Kuznetsov-class aircraft carrier Varyag. Incomplete when the USSR collapsed in 1991, the ship was inherited by Ukraine, which sold the hull to China in 1998. China, in turn, spent 10 years finishing the ship, with the PLA-N commissioning it as the Liaoning in 2012 to be used as a training ship.

The Type 001a, however, is an indigenously constructed ship, China's first such carrier, and virtually a copy of the Liaoning, with a few additional upgrades and improvements made along the way. One major difference is that the Type 001a is much heavier, being designed for regular combat operations and weighing in at 70,000 tons fully loaded.

​"This vessel will soon enter service, and in preparation for that, it has to go through a number of maneuvers, take-offs and landings with the ship-based aircraft," Naval expert Li Jie told SCMP about the Type 001a.

The carrier's previous set of sea trials, in late December 2018, were its first to involve flight tests, and when the ship put to sea from Dalian, observers noted that such necessary equipment as blast deflectors, which redirect jet exhaust up and away from the flight deck, had been installed, Sputnik reported.

Photos on the news website Guancha.cn showed the Type 001a's flight deck awash with activity, including several planes and helicopters as well as associated equipment.

002 carrier is preparing to leave? pic.twitter.com/g1PP4WNK8a

© AP Photo / Li Gang/Xinhua
‘Making it Easy’: Senior US Navy Adviser Suggests Rulebook With China to Avoid Close Calls at Sea
​If the Type 001a passes its final set of tests, it will most likely be commissioned in time for celebrations of the navy's foundation next month. This year will mark many such occasions, as the People's Republic of China itself is celebrating 70 years of existence since the communist People's Liberation Army defeated the Chinese Republic in the civil war that ended in 1949. Now all that remains of the Republic of China is the self-governing island of Taiwan.

Wei Dongxu, a Beijing-based military analyst, told the Global Times that if the ship is commissioned, the carriers might be spotted during the April naval parade together and that the upcoming sea trials would serve as practice for the two ships, now even more similar than they were, working together. The carrier would also receive a name, which some have speculated will likely be "Shandong."

Japan May Get Its First Aircraft Carrier, Allegedly Violating Constitution