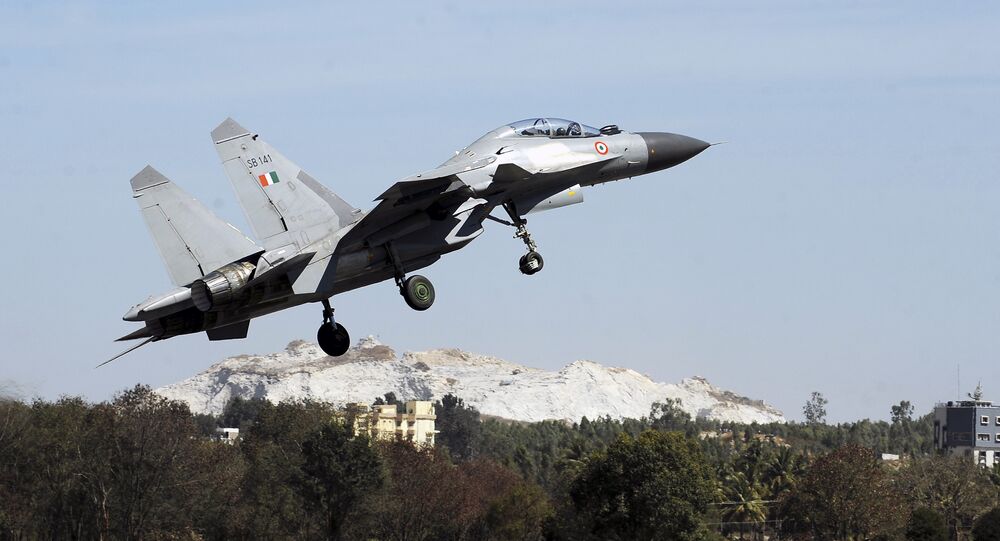 The successful overhaul of the fighter jet in the Indian repair depot, as well as concerted efforts made by India and Russia of late in removing hurdles in the procurement and supply of spare parts, have raised hopes for ready availability of the required fleet of fighter jets at any given time for combat missions of the Indian Air Force.

The Indian Air Force's fighter jet repair depot in Ojhar, Maharashtra, has successfully overhauled the first Su-30MKI multirole air superiority fighter jet. The Su-30MKI is the mainstay of India's fighter jet fleet and the first overhauled version of the aircraft was handed over to the Operational Squadron of the IAF on Friday morning.

"Earlier, the first Su-30 MKI overhauled by this depot successfully took off on April 24 and has been flight tested for its airworthiness, before inducting it for operational tasks at a flying squadron," an IAF statement read.

© Photo : 1st Lt. George Tobias
India to Locally Build Infrared Tracking System for Su-30MKI
During the overhaul, the aircraft was stripped completely and rebuilt from scratch, replacing certain worn out parts/components. 11 Base Repair Depot is the only fighter aircraft repair depot of the IAF and undertakes repair and overhaul of frontline fighters such as the MIG-29 and Sukhoi-30 MKI.

India had initially contracted for 272 Su-30MKI from Russia. While the first 50 twin-seater, twin-engine Su-30MKI were built in Russia, the remaining fighter jets were assembled at the Hindustan Aeronautics Ltd (HAL) facility in India. The last 23 Su-30MKI on order are currently being assembled at the HAL facility.

A few years ago, the IAF had expressed dissatisfaction over the availability of the fighter jet combat missions, as only over 50 percent of its entire fleet was operationally ready at any given time. The other half of the fleet would either be undergoing repairs or grounded due to unavailability of spare parts.

The persistent efforts made by India and Russia, including the latest spare parts supply pact, have improved the availability of the jet to close to 65%.