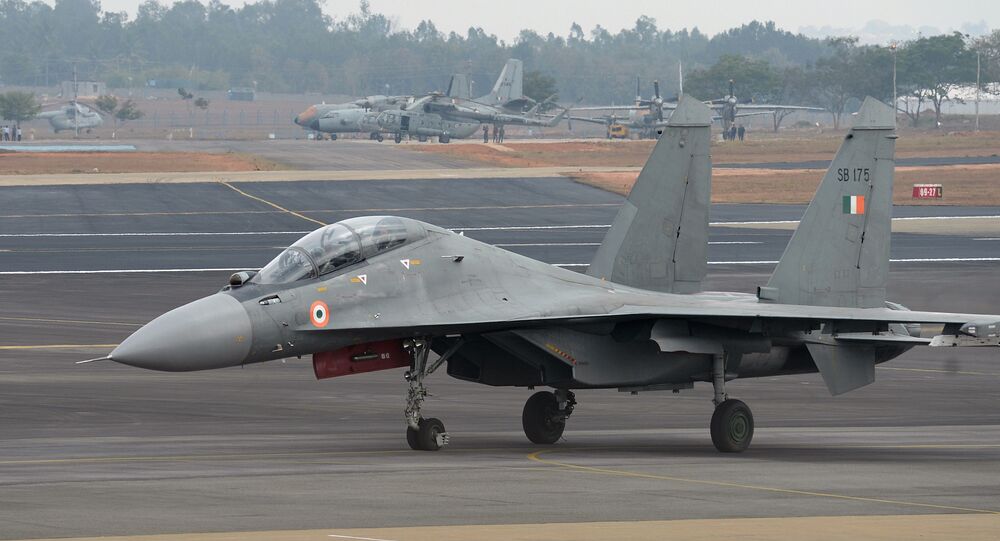 As the Indian Air Force juggles between the idea of procuring single engine or twin engine fighter jets to replenish its depleted squadron strength, an expert tells Sputnik that the emphasis on single-engine fighter aircraft is a contrived and arbitrary approach to a pressing concern.

New Delhi (Sputnik) – The Indian Air Force (IAF) is at a pivotal crossroads. Despite its impressive capability advancements in recent years, it now faces declining squadron strength as the bulk of its current squadron is either already past their service deadline or is due to retire within the next decade.

Presently, the Indian Air Force (IAF) has 34 squadrons (18-20 fighter jets in a squadron), which include MiG-21, MiG-27, MiG-29, Jaguar, Mirage 2000, Su-30MKI, and Tejas LCA aircraft. The bulk of the combat aircraft belong to the MiG family and all of them are far beyond their official dates of service. The IAF desires the strength of some 42 combat squadrons by the 2027-32 period in order to meet the contingencies of a two-front war with China and Pakistan.

India has contracted three more Su-30MKI, two Dassault Rafale squadrons, and two squadrons of Tejas MK.1 fighters. This will add some seven squadrons to the IAF. However, six squadrons of MiG-21Bison and the two MiG-27UPG will be phased out by 2025. Furthermore, one Jaguar squadron is due to retire by 2027, which would mean an overall deficiency of 13 squadrons by 2027 when set against its desired strength.

In order to fill the void to be generated from immediate retirements, the IAF is considering issuing a global tender for single engine fighter jets. Twin-engine jet would be acquired at a later stage when funds are available with the force, according to sources.

Vijainder K Thakur, IAF veteran known for his independent views tells Sputnik about the most appropriate options before the force.

Sputnik: The IAF has been pondering over various options to reach out to the required strength of 42 squadrons in the shortest possible time-frame. Despite considering off-the-shelf purchases along with Make-in-India, it is highly unlikely that fleet could be replenished in the next 15 years.  How necessary is it for the IAF to have 42 squadrons?

Vijainder K Thakur:  If equipped with 42 squadrons of front-line aircraft, the IAF would be a formidable force which would strongly deter any joint adventure by our two adversary neighbors. However, India clearly cannot afford to equip the IAF with 42 squadrons by introducing two very expensive new fighter types into service. If the IAF wants to reach the figure of 42 quickly it should order more Su-30MKIs or MiG-35s.

© AP Photo / AJIT KUMAR
Russia to Upgrade India's Frontline Fighter Jet Su-30MKI Into Super Sukhoi
Sputnik:  There has been a tug of war between those favoring single engine fighter jets and those in favor of twin-engine jets. What in your opinion should be the consideration?

Vijainder K Thakur:  The requirement for a single engine fighter is contrived and arbitrary. Single engine or multi-engine was not a criterion during the MMRCA acquisition which was ultimately abandoned. Why has it become an important consideration now? The single-engine qualitative requirement was likely introduced purely to limit the choice to the F-16 and SAAB Gripen-E, not out of any operational necessity. The IAF should be focused on the payload, range and operating costs of its fighters, not whether it is single or twin engine.

Vijainder K Thakur:  Single engine fighters are claimed to have lower operating costs. However, the evidence to support the claim is not convincing. According to Forbes, the operating cost-per-hour for a F-16C is $8,278 and for the F/A-18E is $10,507. The difference is marginal and if you factor in the F/A-18E's much greater weapon load and range, the 'single engine is cheaper' claim completely falls apart. On the other hand, many F-16s have crashed because their only engine failed, while many F/A-18s have returned to base safely after losing one engine. Twin engine fighters are unarguably safer to fly! Lesser crashes results in lowered operating costs!

Sputnik: Should the Indian Air Force order more upgraded Su30MKI and Su35 instead of going for the global tender on the single-engine fighter jet?

Vijainder K Thakur: The IAF has ordered 272 Su-30 aircraft, enough to equip around 23 — 24 squadrons. Considering that at one point in time the IAF was operating with around 30 squadrons of MiG-21 variants, there is scope to order additional upgraded Su-30MKI or Su-35s. The aircraft is currently under production at Hindustan Aeronautics Ltd (HAL) Nasik division. Also, the Su-30MKI is a perfect fit for the IAF doctrine, which advocates use of fighter aircraft that can perform any role.

Sputnik: The why is the IAF not considering the purchase of additional Su30MKI?

Sputnik: Is this because the Indian Air Force wants different types of fighter jets in its inventory?