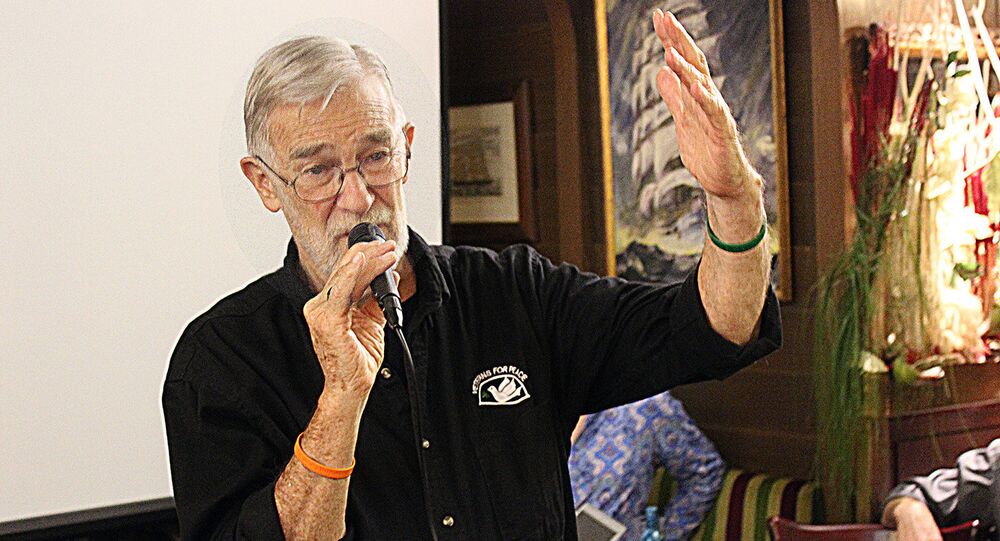 A lifetime civil servant peacefully protested against Gina Haspel’s nomination to lead the CIA last week on the floor or the US Senate. US government personnel responded by throwing the 78-year-old man to the ground and forcing his hands behind his back to be handcuffed, dislocating his shoulder in the process.

Former CIA analyst Ray McGovern, a decorated intelligence officer who served under seven presidents, was rushed out of the Senate for speaking out of turn as an audience member during Haspel's confirmation hearing. As a former CIA employee, McGovern seemed intent on letting Congress know he didn't think it was prudent for someone intimately involved with the CIA's illegal torture program to be running the agency.

According to McGovern, Haspel's lack of fitness is closely linked to America's "cardinal sin" of racism, he told Radio Sputnik's Loud & Clear.

​"You can't torture people who look like you. You can, but it's much more — much more — difficult. You look at the people we've tortured; they don't look like us. We call them ‘towel-heads,' we call them ‘camel-jockeys.' By ‘we' I say — our soldiers are indoctrinated to do that," McGovern told host John Kiriakou, himself a former CIA agent who led the capture of al-Qaeda logistics operative Abu Zubaydah in 2002, and host Brian Becker.

"Once you marginalize, once you dehumanize people, you could do anything you want," McGovern continued. "So that's part of it. That's also part of what I experienced in my 27 hours in the DC jail with my African-American brothers."

Zubaydah, a Saudi Arabian citizen, was perhaps the first person subjected to the CIA's newly launched torture program, which took off after the terrorist attacks on September 11, 2001. After Zubaydah was captured in Faisalabad, Pakistan, in March 2002, he was shipped off to a then-secret prison (or "black site") in Thailand where he was subjected to "enhanced interrogation techniques" like waterboarding, which would soon become a national buzzword. Haspel oversaw such techniques at the site when she later took it over, and also directed the destruction of documents recording the torture later, when the program was exposed.

In addition to strategizing the most effective cocktail of torture — waterboarding, forced nudity, sleep deprivation and physical assault — Haspel, who is US President Donald Trump's nominee to become the next director of the CIA, reportedly destroyed video footage of the events in 2005, despite knowing that this violated the law. Since Mike Pompeo resigned from the CIA director's chair in Trump's cabinet to assume the office of Secretary of State in April, Haspel has been the acting director of America's spy agency.

​"I would call that ‘obstruction of justice' and ‘destroying evidence.' And the last time I checked, those were felonies," Kiriakou said in a column for Reader Supported News.

In a video of the assault on McGovern by US Capitol Police, he says, "I wish you wouldn't beat up an old man. I'm not resisting. No, I'm not. I'm laying on the ground," as one of his arms is dislocated from its socket by the guards.

​"When I went in there, I had no intention to do anything specific," McGovern told Radio Sputnik.

But then Senator Richard Burr, a Republican from North Carolina who serves as chair of the Senate Intelligence Committee, provided what McGovern recalls as entrancing opening remarks.

"I was quite entranced with how Senator Richard Burr from North Carolina, how he started his speech: He said, ‘Now this is an open hearing. And that means we'll go to closed session for secret stuff. But I suppose there will be some people who want to make a statement — if you want to make a statement, make it quick, quick and be gone.'"

"I said to myself, ‘Wow, maybe I'll take advantage of that later.' After an hour and a half of Gina Haspel dodging and weaving, Senator Wyden says, ‘Were you in charge there, at that secret base where al-Nasiri was tortured, yes or no?' ‘Senator, that's classified information, we have to go to secret session.' Now, Wyden ran out of time, right," McGovern laughed.

"His next question would have been: ‘Well Ms. Haspel, who was it that classified that,' and she would have had to say, ‘Well I did, actually.' So he had the spectacle of the nominee classifying, putting out of the public hearing, so that Americans don't get to know that she was in charge, indeed. Everyone knows she was in charge. Every one of those senators knew because they have the documents. She was in charge of that blacksite in Thailand."

McGovern continued, referring to himself in the third person. "So here's McGovern. Finally, the cop between McGovern and Haspel goes to the bathroom… So I go up and say as politely as I can," ‘I think Senator Wyden is entitled to a straight answer to that question. The answer, of course, is yes, she was in charge. The prospect of her classifying it — ‘ and then, all of the sudden, I was set upon by four uniformed policemen and I lost control of my freedom there. And you saw the rest of it," McGovern said.

McGovern also lamented changes he perceives at the agency he gave his professional career to. "After 9/11, everything changed, including these people" working at the CIA involved with the enhanced interrogation program under the color of legal authority, he said. "All the sudden, they lost all sense of a moral code. And there they are, whooping up with Gina Haspel."