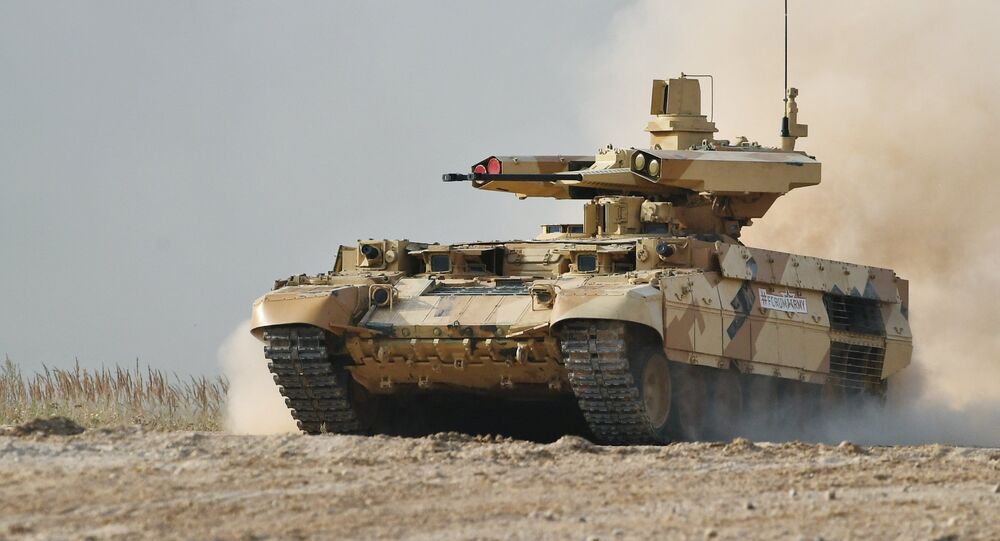 With the Russian Defense Ministry having already announced its decision to purchase the first batch of the BMPT, an advanced tank support combat vehicle, Sputnik looks into why they like this vehicle so much.

Currently, there are two versions of the vehicle based on the T-72 battle tank chassis — "the Terminator 1" and "the Terminator 2." They're both earmarked for export and haven't been purchased by the Russian Defense Ministry.

© REUTERS / SANA
'Terminator' in Syria: Russian One-of-a-Kind Tank Support Vehicle 'Tested in Combat'
The vehicle is armed with two 30-mm 2A42 automatic cannons that can be loaded with 850 rounds of ammunition, four laser-guided Ataka-T anti-tank missile systems and one coaxial machine gun with a remote reloading mechanism.

The vehicle, which has a crew of three, can survive in different climates and zones, including urban areas, and in any light conditions.

Combat fire support vehicle with a combat module from BMPT-72 and T-80U on a dynamic display in the forum "Army-2017".

The Terminator 2 is equipped with night vision, a laser range finder, as well as an integrated laser controlled missile guidance system. It can detect targets within a five-kilometer range, day or night.

RIA Novosti expert Andrey Stanavov believes that "the BMPT-72 being put on service at the Russian Armed Forces' tank units will form part of an armored assault riot police, where each member will be tasked with his own mission."

"In this new possible unit, tanks will destroy buildings and enemy armored vehicles, while the BMPT will obliterate manpower, anti-tank complexes and lightly armored targets. At the same time, 'the Terminators' can act independently, supporting infantry, protecting facilities and accompanying military columns. Additionally, the BMPT is capable of launching pinpoint strikes on terrorists based on upper floors of buildings," according to Stananov.

Despite the evident uniqueness of the BMPT, the Russian Defense Ministry had to think twice before giving the go-ahead for these vehicles entering service at the country's army.

Experts pointed to the military's conservative stance which prevented them from understanding how to the BMPT can be effectively used.

© Sputnik / Ramil Sitdikov
T-90 and 'Terminators': Russian Weapons to Supercharge Iraqi Army
In late July, there were media reports that the BMPT-72 had been spotted at the Hmeymim airbase in Syria. It was demonstrated for Syrian President Bashar Assad by Russian Chief of General Staff Gen. Valery Gerasimov during Assad's visit to the military site.

The pictures released after Assad's visit to Hmeymim show the latest version of the BMPT-72 in desert camo, partly covered with a camouflage net.  Apparently, the machine is part of the Russian forces involved in protecting the base, alongside T-90 tanks.

"As the recent experience has shown, the BMPT-72 successfully passed its Syrian test and is currently ready to join the ranks of the Russian Armed Forces," Stanavov concluded.