© Sputnik / Ramil Sitdikov
Subscribe
The delivery of Russian-made T-90 tanks will significantly increase the potential of the Iraqi military, according to Russian military expert Igor Korotchenko. He suggested that the Iraqi side would receive "hundreds" of Russian tanks.

Russia's 1st Tank Army Receives New Batch of Modernized T-72B3 Tanks
On Thursday, a Russian presidential aide on military and technical cooperation confirmed that Russia and Iraq have made a deal on the delivery of a "large batch" of modernized T-90MS main battle tanks.

"[It is] a significant contract for a large batch. I cannot name its exact worth but the amount [of tanks] is large," Vladimir Kozhin told the Russian newspaper Izvestia.

Earlier, Russia’s Uralvagonzavod defense contractor said that the first shipment of 73 tanks is scheduled to be delivered this year.

"Those aircraft might have played a very important role in the fight against terrorism in Iraq. Of course, Baghdad made a note of it. So, this new contract [on the delivery of T-90 tanks] is another example of the fact that Russian weapons have an excellent reputation abroad. This deal will significantly boost the potential of the Iraqi Army," Korotchenko said in an interview with Sputnik.

Russian State Company Ready to Build T-90S Tanks in Iran – Vice President
The expert noted that T-90 tanks have been actively used by the Syrian military and "performed greatly, even when they were attacked with advanced American-made anti-tank weapons."

"The fact that a T-90 can survive several such shots, without injuring its crew, and still be operational was taken into consideration by the Iraqi side," Korotchenko added.

Commenting on the size of the deal, Korotchenko said, "It may be about several hundred T-90 tanks."

Furthermore, the expert also suggested that the deal may also include the delivery of tank support armored vehicles, in addition to the tanks themselves.

"Taking into the account the role and significance of tanks in modern hybrid warfare, Iraq may also have bought tank support vehicles," Korotchenko said, referring to various modifications of the "Terminator" tank support combat vehicle.

Earlier, a BMPT-72 "Terminator 2" combat machine was spotted at the Hmeymim air base in Syria.

"The 'Terminator' could be very useful in the fight against Daesh, protecting T-90 tanks from grenade launchers," he added. 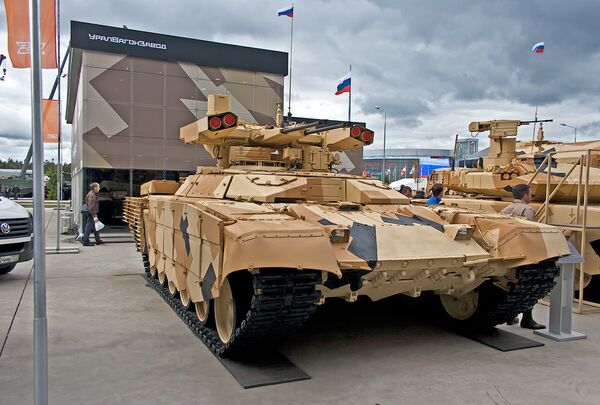 Russia's New Air Defense System to Be in Line With Armata Tank
Finally, Korotchenko noted that the Russia-Iraq deal would contribute to promoting the weapons manufactured by Uralvagonzavod in the arms market.

"Iraq is a country at war. I mean hybrid war against non-regular terrorist groups. In such a situation, tanks and other armored combat vehicles need to be adapted to different combat conditions," the expert said.

Korotchenko said that currently Russia is the world’s leader in the development and production of tanks.

"The T-90 has parity with its fourth-generation foreign analogues. As for the Armata, a fifth-generation machine, it is second to none," the expert concluded.