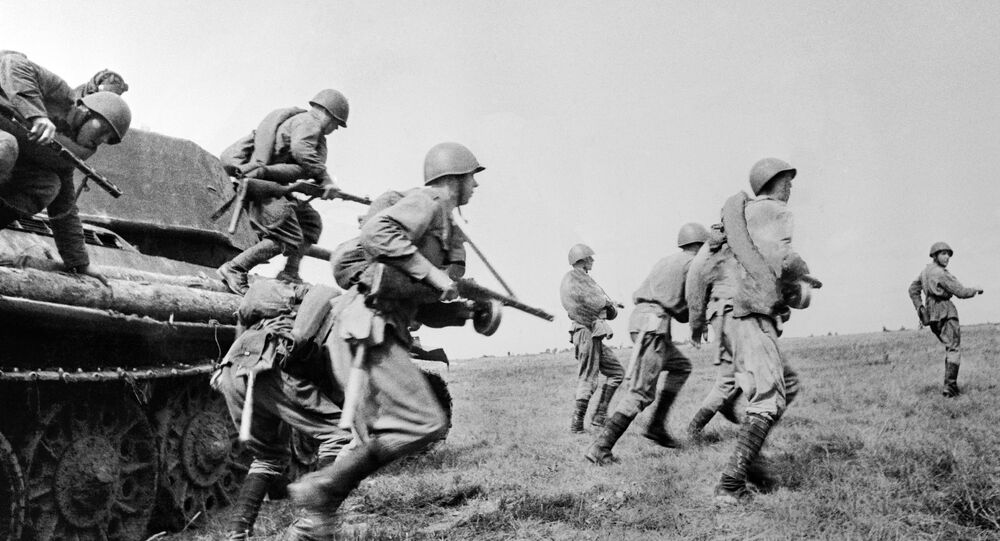 Lying 315 miles south of Moscow and straddling the Kur, Tuskar and Seym Rivers, Kursk is a small, picturesque Russian city, home to around 500,000 citizens and the world's largest known iron-ore reserve. However, between July 4, 1943 and August 23, 1943 it hosted a titanic showdown between Nazi Germany's Wehrmacht, and the Soviet Union's Red Army.

By 1943, Operation Barbarossa — the Axis invasion of the Soviet Union — was in dire straits. After several stunning initial successes, the Red Army had turned the tide in epic victories at Moscow in 1941, and Stalingrad in 1942, and the Wehrmacht was now in retreat.

Kursk was a last ditch effort, in which Nazi Germany committed unprecedented resources into tipping the balance of war in their favor — or at least stopping the inexorable advance of Soviet forces.

#OnThisDay in 1943: One of the largest battles in history begins, the Battle of Kursk: https://t.co/TH3u5YMIDB pic.twitter.com/IxPRNXWiqp

​The Nazis' aim was to encircle and crush five Soviet armies, a quintet that stood poised to smash Marshal Rokossovsky's Central Army and Marshal Vatutin's Voronezh Army in a brutal pincer movement.

While obviously a desirable military objective, the strategy had political considerations at its core — the Soviet leadership were becoming increasingly frustrated at the unwillingness of their Western allies to open up a second front, and ease the intense burden they had struggled under ever since 1941. Hitler knew success in the East could permanently derail the burgeoning association between the Soviet Union, US and UK.

Moreover, it would prove Nazi Germany had only been severely maimed, not fatally wounded, at Stalingrad.

Planning for operation began in February 1943, but Adolf Hitler was keen to delay the strike as long as possible, despite Field Marshal Erick von Manstein's desire to launch as soon as possible.

Knowing the role played by the unforgiving Soviet winter on Barbarossa, the Fuhrer wanted to bide time until the ground had thoroughly thawed — moreover, his love of the new Tiger tank, of which he thought one battalion was worth a division of any other tank, convinced Hitler to delay until more were available.

At a production rate of 12 per week, Manstein faced a long wait — during which the Red Army made their position virtually impregnable.

The Battle of Kursk (1943) was the biggest tank battle in history https://t.co/XzgX7tO3Pj #ww2 pic.twitter.com/vLUnZTgCvy

​Come July 4, Soviet forces were well prepared — in some areas they occupied, artillery regiments outnumbered infantry by five to one, with over 20,000 guns trained on the Wehrmacht, including over 6,000 76.2mm anti-tank guns and 920 Katyusha multiple rocket launchers.

Moreover, with the help of Kursk's entire civilian population, the Red Army had dug around 5,000 kilometers of trenches, equipped with barbed wire, electrified obstacles and flamethrowers.

Some Soviet defensive zones were six kilometers deep, and 2,200 anti-tank and 2,500 anti-personnel mines had been laid across every single mile of the front, a density four times that which had defended Stalingrad.

In all, over half a million anti-tank mines and nearly 440,000 anti-personnel mines were laid.

Nonetheless, the Wehrmacht began their assault July 4 in the village of Prokhorovka. Fighting would last for 50 days.

World War II is a conflict heaving with mindboggling statistics, and Kursk gives birth to some of the most astonishing — a combined three million troops, eight thousand tanks and five thousand warplanes were involved, and its constituent clashes include history's biggest tank battle, and costliest single day of aerial warfare.

A knocked out #German panzer and one of its supporting infantry at the battle of Kursk. #ProfileWW2 #History #WW2 pic.twitter.com/1mRHxmeprl

​When compared with the Battle of Britain, the Bulge, D-Day, El Alamein or Midway, the clash for civilization at Kursk is obscure in the West — rarely mentioned in mainstream discourse and seemingly recognized only by a few professional historians. However, those who possess even a cursory knowledge of Kursk are keenly aware of its seismic significance, and believe it to be the most significant clash of World War II.

© AP Photo /
D-Day's 73rd Anniversary: Why Everything You Know About the Landings Is Wrong

Among them is the eminent Dennis Showalter — in his book Armor and Blood, Showalter concludes the fight was the Eastern Front's "transition point… its point of no return."

After Kursk, never again did the Nazis step bravely and confidently into a new day, pushed as they were into a virtually perpetual defensive standing in Europe.

Conversely, had the Wehrmacht prevailed, the tide of war could've been decisively turned in their direction — potentially leading to the defeat of the Soviet Union, and the triumph of Nazi Germany in Europe, if not the world itself.

When Western troops landed in Normandy, June 6, 1944, they met disheveled German forces with no air cover, lacking fuel and supplies — had the Red Army not triumphed at Kursk, the invading American, British and Canadian troops would have encountered the Nazis at full strength, and D-Day may well not have succeeded.

The Battle of Kursk: 70 Years On

Heroes of the Battle of Kursk

KURSK MARKS 61ST ANNIVERSARY OF VICTORY IN BATTLE OF KURSK