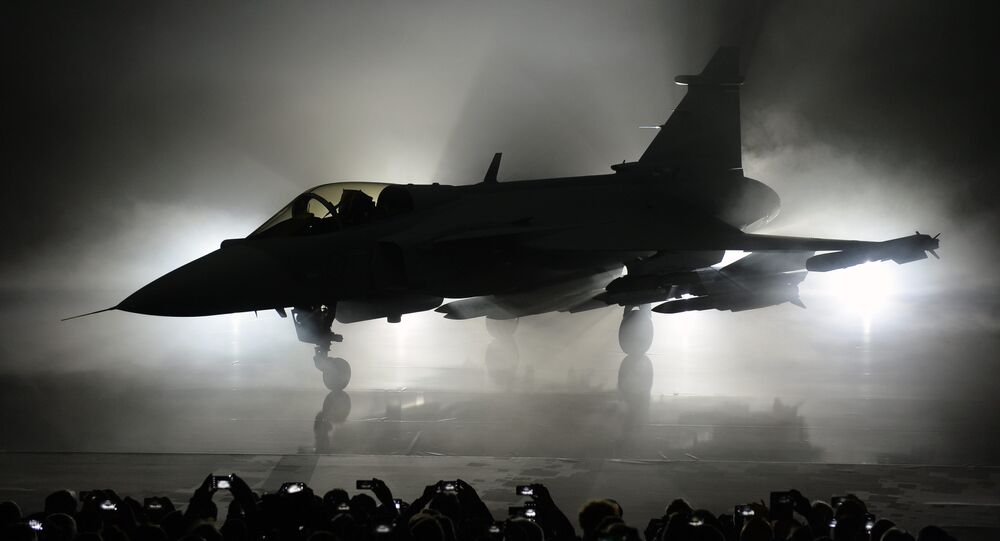 © AFP 2021 / JONATHAN NACKSTRAND
Peaceful Swedes Want Their Piece of EU Arms Cake
In its first flight, the E-series Gripen took off from Saab's airfield in Linköping, Sweden and flew over Östergötaland for about 40 minutes before landing. During the flight, a number of systems were tested, including landing gear, Swedish website Corren reported.

The Gripen E's first flight was initially scheduled for late 2016, yet was delayed for six months to allow Saab to fine-tune its software. In May, company officials called the decision "right" as it allowed them to have more time to ensure that all risks had been eliminated.

"Today we have flown this world-class fighter aircraft for the first time. We achieved it with the fully qualified software for the revolutionary avionics system. We are about to give our customers a smart fighter system with the future designed in from the start," Jonas Hjelm, Saab's head of the aeronautics business unit, said in a statement.

The Gripen E is an advanced version of earlier Saab fighter jets. Compared with Gripen C/D, the length of the E/F version has been increased from 14.1 to 14.9 meters, the wingspan from 8.4 to 8.6 meters, the maximum starting weight from 14 to 16.5 tons and the weapons capacity with 1.5 tons. The range has been extended with 40 percent bigger internal fuel tanks. Also, the engine is 22 percent stronger, while the radar and the warning system have become more nuanced.

© Photo : Youtube/ Shephard Media
Swedish Saab Hopes to Make Billions on Europe's Sweeping Military Upgrades With Only Two Subs Sold
As the maiden flight took place shortly before the start of the Paris Air Show, which starts today, Saab might have obtained a trump card for its meetings with prospective buyers. As Saab officials previously indicated, future tenders in Belgium and Finland were considered to be potential opportunities for the Gripen E.

Of yet, the Swedish Air Force is expected to become the foremost Gripen user, having committed to a purchase of 60 E models. Meanwhile, Brazil is on order for 36 jets, including eight twin-seat F versions. Deliveries to both Sweden and Brazil are slated to start in 2019.

Earlier in June, Brazil confirmed its plans despite the ongoing recession, rampaging unemployment, political turmoil and vague economic prospects. Previously, though, Brazil was reported to have a need for 100 aircraft, which is why a question mark was put to the extension of the Brazilian order.

"We are only at the beginning of our cooperation, but there is no doubt that this opens up huge opportunities in the future, not only for Brazil but also for other countries in South America," Brazilian Defense Minister Raul Jungmann told the Swedish daily Svenska Dagbladet.

© AFP 2021 / Patrick Tragardh / SCANPIX
Arms Race Fears Roused in Sweden by Saab's Indiscriminate Campaigning
While Brazil may seem the largest export market so far, it may be still overshadowed by India, which previously voiced plans to procure over 100 plans to the tune of $20 billion.

Botswana, whose President Ian Khama today arrives in Stockholm to negotiate a highly controversial deal with Saab, may become yet another prospective Gripen user, Dagens Nyheter reported. Botswana is poised to buy eight Gripens of previous generations to the total cost of $1.6 billion, which triggered protests from the country's opposition and was predicted to incite an arms race in the region.

Despite its image as an international peacemaker, Sweden is one of the world's largest arms exporters per capita, selling arms to the tune of 11 billion SEK ($1.3bln) in 2016.