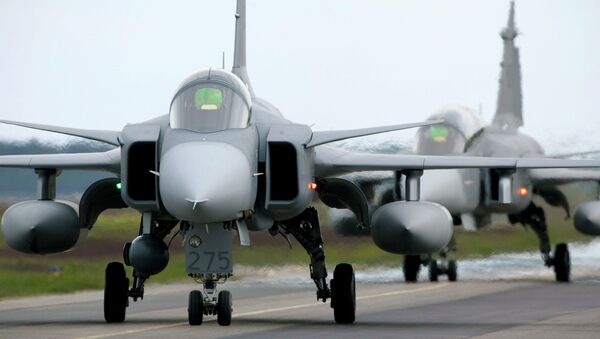 Dubious Defense Cooperation With Colombia Whets Saab's Appetite
A group of peace researchers from Uppsala University condemned Saab's campaigning in Botswana, saying the move was in direct conflict with Sweden's foreign policy goals. These are peace, human rights and poverty reduction, according to an opinion piece published by the Swedish daily Svenska Dagbladet.

Firstly, in Botswana, which was long been touted as an African success story in terms of equality, human rights and economic development, democracy has gradually eroded. The country's government is hardly an eligible partner for Sweden, which is trying to emerge as a champion of human rights on the international arena. Botswana, according to Uppsala University researchers, is clearly heading in an authoritarian direction, with growing surveillance, reduced opportunities for freedom of expression and reprisals against anti-government views.

Norway's Controversial Arms Export to Warring Countries Under Scrutiny
Secondly, a Saab deal would contradict Sweden's goal of combating poverty, as Botswana is facing major economic problems. Over a fifth of its population of two million live in absolute poverty and subsist on less than two dollars a day, despite the country's large diamond resources. The billions to be invested in fighter jets would undermine efforts to curb unemployment, and fight drought and corruption.

Third, the idea of Botswana acquiring a fleet of advanced fighter aircraft may trigger a regional arms race, with Namibia and other neighboring countries to follow suit, with detrimental consequences for everyone but the arms dealers. At present, Botswana is not faced with any direct external threat and it is unclear why huge sums must be invested in the acquisition of advanced fighter jets. Whereas the need to protect the country's tourism industry, combat poaching and monitor the flow of refugees previously were indicated as reasons, none of these problems can be solved with advanced fighter jets.

The Swedish researchers concluded that the arms deal with Botswana would worsen the economic and democratic development in the country, undermine regional security and mar Sweden's reputation in Southern Africa.

Despite Saab's ambitious hopes for the Gripen to "dominate the market," the company's bids were consequently rejected by Norway, Poland, Denmark and the Netherlands. The Rafale and the Eurofighter Typhoon are also regarded as favorites in Malaysia, where the government will decide on an aircraft fleet upgrade.

So far, Sweden remains the largest consumer of the Gripen, with an order on 60 new-generation Gripens placed by the Defense Ministry. Saab's agreement with Brazil on 36 planes worth 40 billion SEK ($4.5bln) remains the company's largest overseas success. Other Gripen consumers include South Africa and Thailand, while the Czech Republic continues to rent Gripens from Sweden.