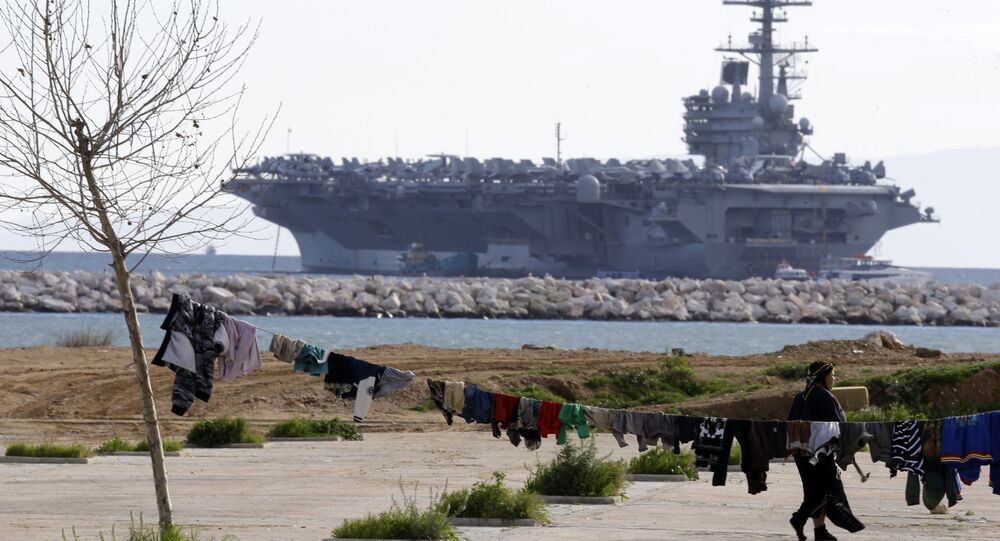 The USS George H. W. Bush was met by at least 20 Iranian Revolutionary Guard ships as it transited the Strait of Hormuz into the Persian Gulf on Tuesday.

The US aircraft carrier was escorted by a Danish frigate and a French destroyer in addition to a team of attack choppers sailing overhead.

Officials aboard the USS Bush attempted to communicate with the Iranian vessels patrolling the area, but it is not clear whether trustworthy communications were established. In the past, there have been incidents between US and Iranian naval ships.

"While these [ships] probably don’t have explosives, their behavior can lead to a miscalculation because we don’t understand their intentions," a US Navy spokesman said.

"Our intention is never to start anything, but if the situation arises, we are within our right to defend ourselves," the spokesman added.

© AP Photo / Alex Brandon
US to Adhere Strictly to Iran Deal, Make Sure Tehran Does Too - Trump's Adviser

An Iranian national studying in the US recently told Sputnik News that Tehran often mirrors the rhetoric and posture adopted by Washington. Hence, when the US militarizes and seeks to project power against Iran, leaders in Iran have some incentive to do the same. Attempts to demonize the Iranians in front of the rest of the world also help solidify the narrative within Iran that the US is a hostile force, the student said.

About 20 percent of the world’s traded oil passes through the Strait of Hormuz daily. But contrary to the popular belief that the US consumes most of this oil, in fact 75 percent of oil coming out of the Persian Gulf is actually headed for China, according to geopolitics expert Ian Bremmer of the Eurasia Group.

It’s not just one expert’s opinion either: On November 28, the Wall Street Journal reported that the US had become a net exporter of natural gas. And as of 2015, 76 percent of all US petroleum consumption was supplied by domestic oil producers, according to Energy Information Agency data.

US President Donald Trump has done little to quell tensions between Washington and Tehran. On Inauguration Day, the White House website was updated to show that a “state of the art” missile system was needed for threats posed by Iran. Not long afterward, the now-fired or “resigned” National Security Advisor Michael Flynn, a known Iran-hawk, said the US was putting Iran "on notice."