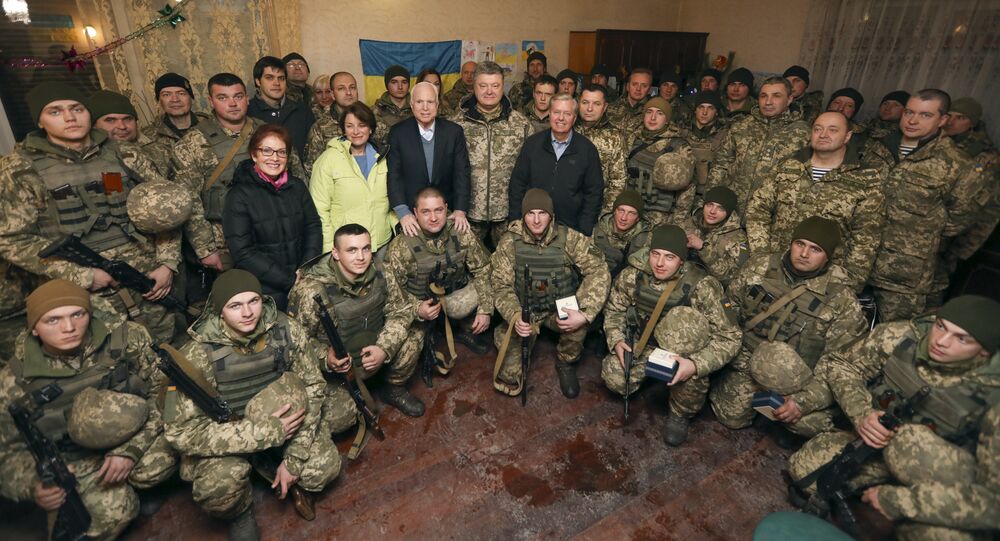 Verkhovna Rada, the Ukrainian Parliament, has adopted a law Thursday allowing the admission of foreign troops to conduct exercises on the Ukrainian territory in 2017.

© AFP 2021 / EMMANUEL DUNAND
Ukraine's Poroshenko 'Absolutely Sure' of Effective Future Cooperation With US
A total of 236 parliamentarians voted in favor of the law.

Earlier, President Poroshenko asked the parliament to approve his decision to allow the admission of foreign troops on the territory of the country to take part in military drills in 2017. These drills would include the Sea Breeze-2017 and Rapid Trident-2017 exercises.

The law applies to the US military troops, as well as outfits from other countries, NATO members and states taking part in the "Partnership for Peace" program. That would mean up to 3,000 servicemen with weapons, military equipment, up to six warplanes and helicopters.

The document will now have to be signed by the President.

© AP Photo / Efrem Lukatsky
Biden's Visit to Ukraine Sends Shivers Down Kiev's Spine
Ukraine's legal system prohibits any kind of military units without a legal provision from operating on the country's territory. Moreover, it prohibits the deployment of foreign military bases, therefore all foreign troops have to be admitted on the territory of Ukraine by a special legislation as advised by the President.

On Tuesday, Poroshenko announced that he had agreed on the date of his visit to Washington with US president-elect Donald Trump, after the inauguration. Talking to The Wall Street Journal, he said that he hoped to meet with Trump in February.

Ukrainian President Petro Poroshenko, right, and US Vice President Joe Biden prior their statement to the media at the Presidential Administration Building in Kiev.