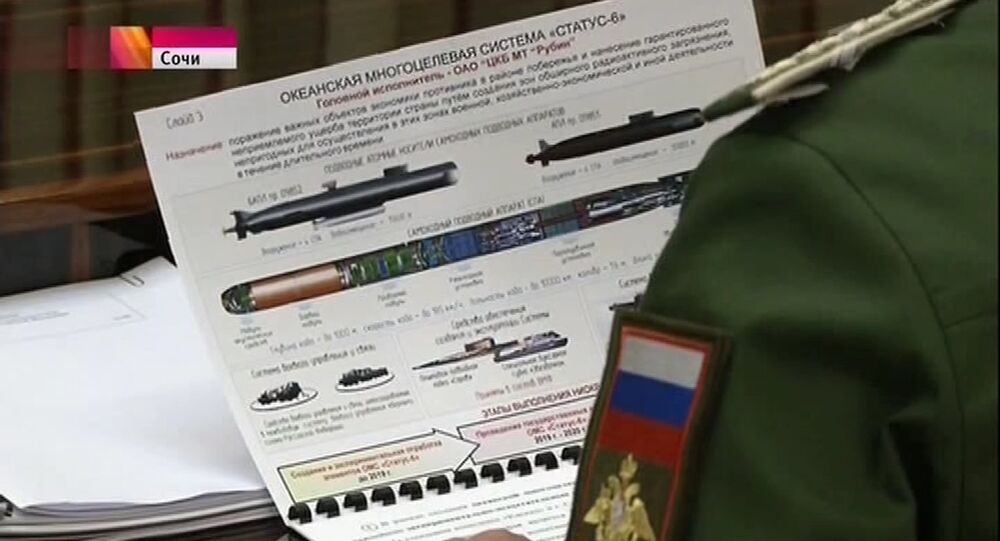 On Thursday, intelligence officials speaking to the Washington Free Beacon said that Russia had conducted a test of a "revolutionary" new nuclear-capable drone sub. Unnamed Pentagon officials told the paper that the new sub, which poses "a major strategic threat" to US ports and coastal military installations, underwent testing on November 27.

The unmanned underwater vehicle is designed to deliver a nuclear weapon armed with 'tens of megatons' distances up to 10,000 km to launch destinations off enemy shores. Believed capable of submerging up to 1,000 meters, the vehicle can accelerate to speeds up to 56 knots, which is faster than any current-generation NATO homing torpedo. The highly maneuverable drone is believed to be nuclear powered, which would make its operations quiet, and is to be controlled remotely by Navy ships using ultra-long waves.

The Pentagon told the Free Beacon that the drone sub was launched for testing from a Sarov-class submarine, itself a relatively mysterious vessel believed to be an upgrade of the Kilo-class diesel-electric attack sub. The Sarov, serving with the Russian Northern Fleet, is regularly used to test new weapons technology.

The secret drone is part of an underwater drone program known as Ocean Multipurpose System 'Status-6', which is being developed by the St. Petersburg-based Rubin Design Bureau. The program's NATO code name is the 'Kanyon'. US intelligence originally suspected that Russia planned to build a prototype of the drone only by 2019. Reports of the vehicle's testing, if accurate, indicate that the project has progressed much faster than expected.

The existence of Status-6 was accidentally revealed last year, with a presentation slide with top secret information about the initiative accidentally broadcast on Russian television as part of a story about President Vladimir Putin's meeting with defense officials in Sochi. Kremlin spokesman Dmitri Peskov subsequently confirmed that "some classified information had been captured on camera."

Some analysts have since suggested that the leak was not accidental, and that it was meant to send a signal to Washington about the capabilities of the Russian strategic deterrent. The new weapon would provide an effective asymmetrical response to the construction of US missile defense systems in Europe. The drone would be capable of circumventing missile defense systems and retaliating even in the event of a US nuclear first strike.

The US media response to the project has been borderline hysterical, with officials and military analysts calling the project "nuts" and "insane", classifying Status-6 as a "doomsday drone" and complaining that the US's submarine drone program does not have any nuclear-armed projects. Popular Mechanics even cited 'reports from Russia' saying that the weapon carried by the drone will be a massive dirty bomb. Russian observers have countered by suggested that such fear-mongering is an indication that the Pentagon has stood up and taken note of Russia's new potential deterrent.

© Flickr / Tonio ReinesHerz
Why Russia's Revived 'Ghost Trains' Fuel So Much Fear in the West
For his part, independent Russian military analyst Vladimir Tuchkov wrote that Status-6 is actually the spiritual successor of Soviet-era projects going back to the 1960s. These projects, he noted, included experimental weapons such as the T-15 torpedo – a 23 meter-long, 40-metric ton weapon with a 100-megaton thermonuclear charge. In its own time, the miniaturized nuclear reactors necessary to power the torpedo didn't exist, and its electric batteries were able to propel it a distance of only 30 kilometers.

Half a century later, the commentator noted, "the problem with the reactor has been solved. At the same time, significant progress has taken place not just in nuclear power engineering, but also with electronic components and control systems, materials, as well as other constituent elements of the torpedo. Additionally, changes have been made to the Navy's strategy and tactics." Accordingly, Tuchkov suggested that "Status-6 is a completely new development; all that it has in common with the T-15 is its 100-megaton charge."

It's significant to point out that the experimental drone is not just a torpedo, but a robotic submersible equipped with elements of artificial intelligence, hypothetically allowing it to act independently thousands of kilometers from its specially-purposed submarine host.

© Photo : Russian Defense Ministry
US Navy Admiral Says American Interests Challenged by Russian ‘Arc of Steel’
At the same time, Tuchkov noted that the 'asymmetrical' nature of the deterrent's design also lies in its low cost, with the drive train, for instance, expected to cost about $12 million.

Given the drone's expected capabilities (including autonomous and quiet operating potential), it seems likely that in addition to its role as a nuclear launch platform, Status 6 could also be used for intelligence-gathering missions.

There is circumstantial evidence to believe that two new subs being converted for special use by Russian shipbuilders at the Sevmash shipyards in Severodvinsk – the Belgorod and Khabarovsk, may be used to carry the Status-6 drone sub. According to Tuchkov, these are expected to come online by the end of the decade.