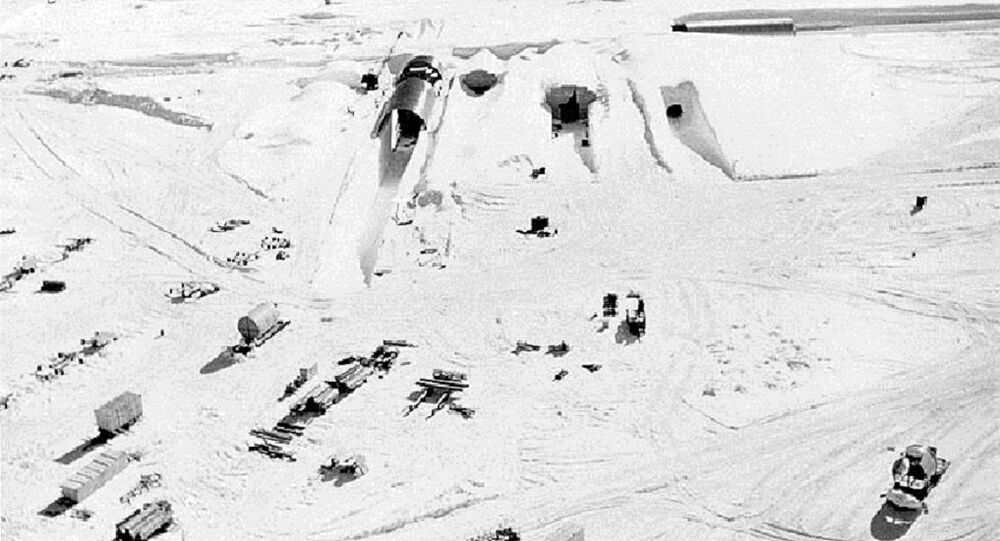 The global warming has notoriously lifted a number of formally dormant environmental issues. Researchers sound the alarm that the climate change may unearth a snow-covered former top secret US base in Greenland, leaking toxic pollutants into the environment and raising difficult questions of response for the thorough clean-up.

© Sputnik
Abandoned US Military Base in Greenland Will Spill Its Secrets as Ice Melts Away
In the Cold War's heyday, US Army engineers constructed a futuristic secret military base in northwestern Greenland. The so-called Camp Century accommodated up to 200 soldiers in a network of tunnels, containing everything from research facilities to a hospital, a cinema and a church — all powered by a nuclear reactor.

Officially, Camp Century was built to provide the US a laboratory for Arctic research projects, but it was also home to a secret US effort to deploy nuclear missiles. This effort was code-named Project Iceworm and, although never mentioned in the treaty between the US and Denmark, even included a railway under the snow. However, since US scientists found that the Greenland glacier was shifting at a much higher pace than expected, the base was effectively abandoned in 1967, after only three years in action.

Left behind were left copious amounts of polychlorinated biphenyl used in building supplies, tanks of raw sewage and radioactive coolant used in the nuclear reactor that was used in Camp Century. All the toxic waste may soon end up being released into the environment on account of higher temperatures.

"Camp Century", a once-secret military base under the Greenland Ice Sheet, could be unearthed by climate change: https://t.co/wW3z7wc2Xc

​"When the waste was deposited there nobody thought it would get out again," William Colgan, an assistant professor in the Lassonde School of Engineering at York University in Canada, told AFP.

The US Army evacuated the nuclear reactor, but left the toxic waste equivalent to the mass of 30 Airbus A320 airplanes buried in Greenland seemingly permanent ice and snow, betting on Mother Nature's own fridge. However, the chemicals may start leaking into the environment by the year 2090, as the temperatures in the Arctic are now rising faster than in the rest of the world and the melting is now longer offset by snowfall, the study led by Colgan found earlier this year.

​An in-depth cleansing of the site is both pricey and difficult to execute, which is why the US and Denmark may end up in a bitter dispute over the future of Camp Century's ruins. This nascent dispute has left Greenland, a nation of 55,000, which achieved home rule from Denmark in 1979, in fear.

"There's not so much that Greenland can do in regards to the Danish-US relationship and what they will do concerning the final responsibility," Sara Olsvig said, as quoted by news outlet the Inquirer.

Greenlandic Foreign Minister Vittus Qujaukitsoq called the study's finds "worrying" and pledged to establish who would be responsible for the clean-up. Previously, the former Greenlandic government requested a report on the environmental Camp Century from Copenhagen, yet did not receive any assessment.

Subsequently, both Danish Foreign Minister Kristian Jensen and the US Department of Defense promised to cooperate in close dialogue to address mutual security concerns.

Since establishing which country would be responsible for the cleanup seems a tricky task, the US and Denmark may renew their environmental cooperation in Greenland after having previously cleaned up a site where a US B-52 strategic bomber had crashed in 1968. The bomber carrying four hydrogen bombs fell near the Thule air base, which is located some 240 kilometers from Camp Century.