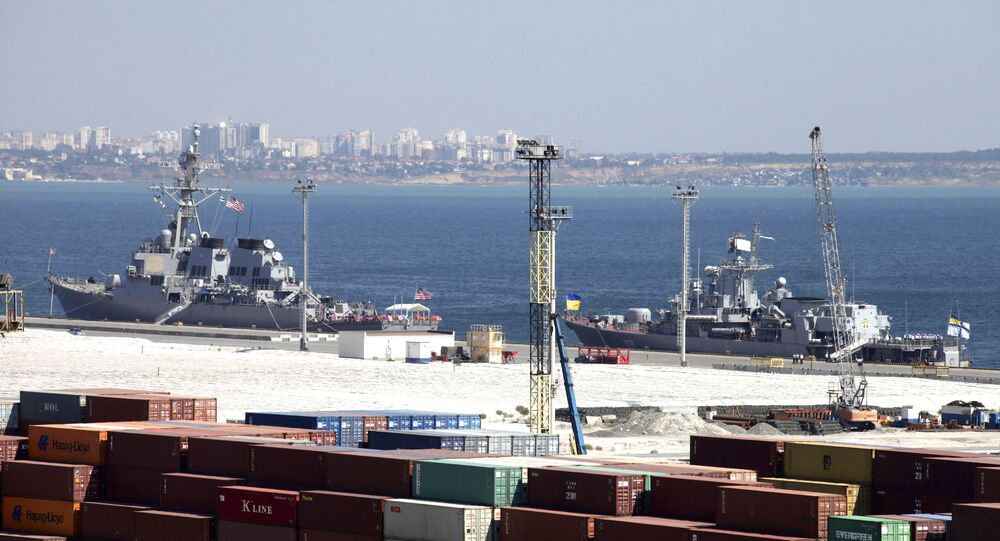 Next Monday, US Navy ships will join their Ukrainian counterparts in Black Sea naval drills dubbed Sea Breeze-2016. However, some analysts are concerned that the content of the exercises could lead to devastating consequences for the entire region.

The 'Black Sea Breeze-2016' drills are set to start in southern Ukraine on July 18. Speaking to the Ukrainian media, Defense Ministry spokeswoman Oksana Gavrilyuk vaguely explained that the exercises' will focus on a 'multinational security operation' in a 'crisis region'.

For his part, independent Russian military analyst Sergei Ishchenko is concerned that the operation amounts to a rehearsal for an invasion of Crimea.

In a worrying analysis for Svobodnaya Pressa, a Russian online newspaper, Ishchenko, a retired Navy captain and graduate of the Sevastopol Nakhimov Naval School, warned that despite the exercises' regularity (this is their 15th year), a closer analysis reveals that they are anything but regular.

© Sputnik / Igor Zarembo
US Destroyer Committed ‘Gross Violation’ in Encounter With Russian Ship (VIDEO)
Incidentally, 'Breeze-2016', a separate set of exercises with a similar name, began earlier this week in the territorial waters of Bulgaria. Involving 25 vessels, two planes, two helicopters and some 1,700 personnel from Bulgaria, Romania and Turkey, as well as Greece and Spain, the exercise also includes the participation of the alliance's 'Partnership for Peace' partners.

Those drills are being closely monitored by the Russian Black Sea Fleet's intelligence ship Liman.

However, as Ishchenko pointed out, the US-Ukrainian exercises beginning on July 18 are an entirely separate set of drills. In this connection, a question arises, according to the analyst: "Why the confusion? Why call two separate military training events involving different participants by the same name, even if they are planned in the same headquarters?"

​"The answer," the analyst suggested, "lies in the second part of the question: their unified command." Those involved in the planning of the closely timed naval exercises apparently wanted to demonstrate their common overall purpose and common enemy which, naturally, is Russia.

The fact that Sea Breeze and Breeze aren't just one large exercise may have more to do with political considerations, according to Ischenko.

© AP Photo / Vadim Ghirda
Why Bulgaria Ruined NATO's Black Sea Plans (No, Kremlin's Not to Blame)
Last month, prior to the start of either exercise, Bulgarian Prime Minister Boyko Borisov bowed out of a proposed NATO project to create a permanent naval task force in the Black Sea, emphasizing that Bulgaria "doesn't need a war in the Black Sea," and adding that "send[ing] warships as a fleet against the Russian ships exceeds the limits of what I can allow."

Effectively, Ishchenko noted, the 'Breeze-2016' exercises set to begin next week will see the "hesitant powers return to base, while the likeminded forces from the United States and Ukraine come onto the stage. It has already been announced that their joint maneuvers will last 25 days, in patches, all the way through to October. On what days they will flare up and die down again depends, it can be assumed, on Russia's reaction."

If the unprecedented geographical scale of the exercises is anything to go by, the US-Ukrainian drills bode trouble, according to the analyst. "Their spread is much wider than in previous years – stretching to Kherson, Mikolaiv and Odessa – that is, those Ukrainian territories which directly border Russia's Crimea."

"The focus of the drills, judging by statements from the Ukrainian Defense Ministry, should also ring alarm bells in Russian ears," the analyst noted. Their talk of joint operations by a multinational force in a 'crisis region' is clearly distinguished from the drills of years past. "In previous years, Breeze was covered by the semantic fig leaves of 'anti-piracy', 'earthquake relief', and so on. Now, the masks have been thrown off. If one wants to be really brief and precise, an operation of a multinational force in a crisis region is normally referred to as an 'intervention'."

© REUTERS / MURAD SEZER
In the Face of Russian Warnings, US Says It Will Remain in Black Sea
The military planners behind the joint US-Ukrainian operation "are not making any particular secret" regarding their plans, Ishchenko warned. "The main role is clearly assigned to combat aircraft. Just take a look the list of Ukrainian military airfields expected to be used in the upcoming exercises: Shkolniy near Odessa (basing Su-27 fighters and military transport aircraft), Kulbakino in Mykolaiv (featuring the 299th Air Tactical Brigade, with Su-25 close air support aircraft), Chernobaevka in Kherson region (home to the 11th Army Aviation Brigade, including Mi-24 and Mi-8 helicopters), plus landing areas on the Tendra Spit near Ochakiv, and on Pervomaiskiy Island…In addition, when necessary, the Odessa International Airport is also expected to be used."

The exercises will reach all the way to the mouth of the Danube River, where amphibious assault training is expected to take place. Furthermore, "as stated in Kiev, Ukrainian and US combat swimmers and divers will engage in demining operations."

Effectively, Ishchenko suggested, clearing the approaches to the shore is a mandatory component of preparations for amphibious landings. The resources for this already exist, and could include US Navy SEALS, recently reported to have been deployed in Bulgaria, as well as Ukraine's 2nd Detachment of the 73rd Maritime Special Operations Center in Ochakovo.

The composition of forces also reveals a great deal about the exercises, the analyst explained. "From the US side, it includes five ships and two submarines. The subs' participation is particularly noteworthy, given that the US only has nuclear submarines in its fleet, and that all subs, even non-nuclear ones, may enter the Black Sea only in accordance with international agreements."

Essentially, "the US's multipurpose cruiser subs will only be able to participate in the exercises from the Mediterranean Sea. What tasks can they effectively solve there? Only one: subjecting Crimea or other Russian Black Sea territories with a massed Tomahawk cruise missile strike." There's literally nothing else for them to do, according to Ishchenko.

© Flickr / Commander, U.S. Naval Forces Europe-Africa/U.S. 6th Fleet
Crowded Seas: Why US Warship 'Provoked' Russian Frigate in Mediterranean
The Ukrainians will use up to eight aircraft and helicopters, plus 50 ground vehicles, and most importantly – nine ships and smaller vessels.

In consideration of the derelict condition of much of Ukraine's Navy, it's likely, according to the analyst, that the forces used will include the flagship frigate Hetman Sahaidachny, the recently restored tanker Fastov, the search and rescue vessel Donbass, the supply vessel Shostka, the fire boat Borschev and the Novoozernoe tugboat. This list might also include the missile boat Priluki, which was recently restored at the Mikolaiv docks. That ship has only begun mooring trials, and appears to be unprepared to maneuver alongside US cruisers and frigates.

But even that does not amount to nine ships. Accordingly, Ishchenko suggested, the other Ukrainian vessels are likely to include the US patrol boats recently supplied to Kiev. "These are large inflatable rubber boats with powerful motors and machinegun mounts, designed for covert landings of Special Forces groups on an enemy coast."

Effectively, the analyst warned, "if this reasoning is correct, it becomes clear that the main event of the upcoming US-Ukrainian exercises will be the landing of forces near the mouth of the Danube. Then the question becomes how similar are these places to the Crimean coast. And how well will the upcoming training battles replicate real ones?"

"By and large, the main question can be worded differently: how prepared is the world for nuclear war? Even if it is just a limited one using tactical nuclear weapons in the Black Sea and in the Mediterranean theater? Because given the vast superiority of NATO and Ukraine over our military in terms of conventional arms, there is no other way for such a conflict to end. There is no other ending to any large-scale attack on Crimea."

Ultimately, "it would be interesting to know whether a hypothetical nuclear exchange has been taken into account in the planning in Washington and Kiev for Sea Breeze-2016," Ishchenko concluded.

US Destroyer Committed ‘Gross Violation’ in Encounter With Russian Ship