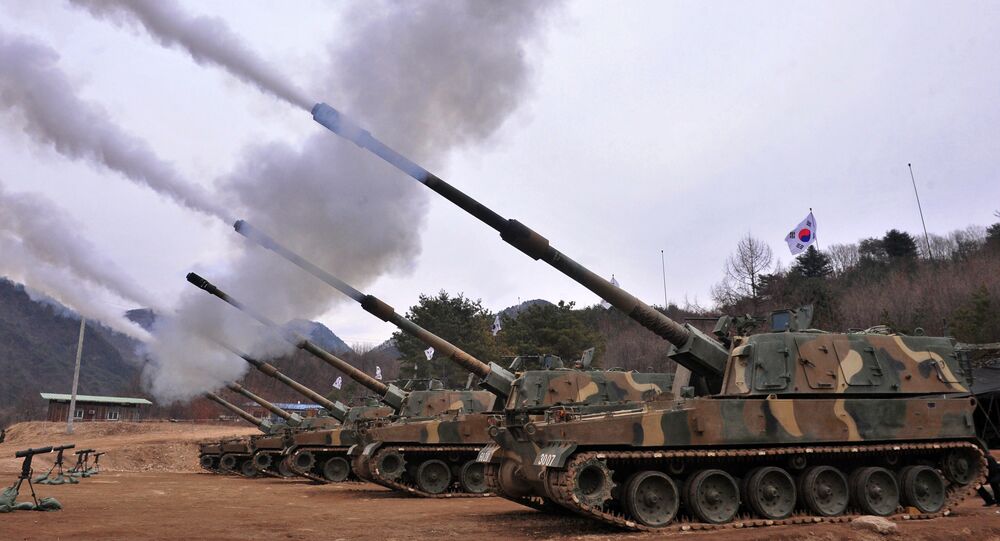 Finland's Ministry of Defense, which has been suffering from budget cuts, has been discussing the procurement of second-hand military equipment with South Korea in order to update its forces in the most cost-effective manner.

© Sputnik / Alexei Druzhinin
Putin Warns Finland Against Joining NATO, Says Moscow Would Shift Troops
Finland's ambition is to update its rapid response forces, which can be deployed quickly. The purpose of the future contract is therefore to enable the support for the operational troops with artillery equipment that features both a long range and good mobility on rugged terrain and on roads. The South Korean hardware is set to partially replace obsolete artillery during the 2020s and 2030s, Finland's Defense Ministry reported.

By its own admission, the Finnish army has studied the supply and prices on the international market for both new and used 155 mm self-propelled artillery systems, and is currently pondering the acquisition of South Korean K9 Thunder artillery pieces.

According to the Defense Ministry, the K9 Thunder artillery pieces are suitable for military training and appropriate for the Finnish conscript army due to their cost-effectiveness. The Finnish Defense Ministry believes that the Korean ACS will provide the necessary performance at minimum cost. Negotiations are still underway, which is why no details of the transaction have so far been disclosed.

The K9 Thunder is a South Korean self-propelled 155 mm howitzer developed by Samsung Techwin for the Republic of Korea Armed Forces. The development program of this howitzer has been underway since 1989. The South Korean Army received its first batch of K9 Thunder units in 1999.
The list of current K9 operators includes India, Poland and Turkey. Among other European nations, Denmark is pondering the prospects of acquiring K9 weaponry.

© Flickr / Defence Images
'Neutral' Sweden Gets Ready to Embrace NATO, But What Else is New?
Last year, Finland's Defense Ministry was instructed to develop a plan for saving the funds it was allocated. At present, savings of 60 million euros are planned for the 2016-2020 period. The savings are expected to be made possible through staff cutbacks and the reduction of working hours of staff involved in logistics and management. The Defense Ministry also expects to reduce the flight hours of McDonnel Douglas F-18C fighters and Airbus NH90 helicopters, as well as the cost of recruit training.

Earlier this year, the Finnish army was reported to have joined the so-called Nordic Combat Uniform (NCU) project from 2020, in a move to give Danish, Swedish, Norwegian and Finnish troops the same outfits. The collaboration is expected to yield significant savings.