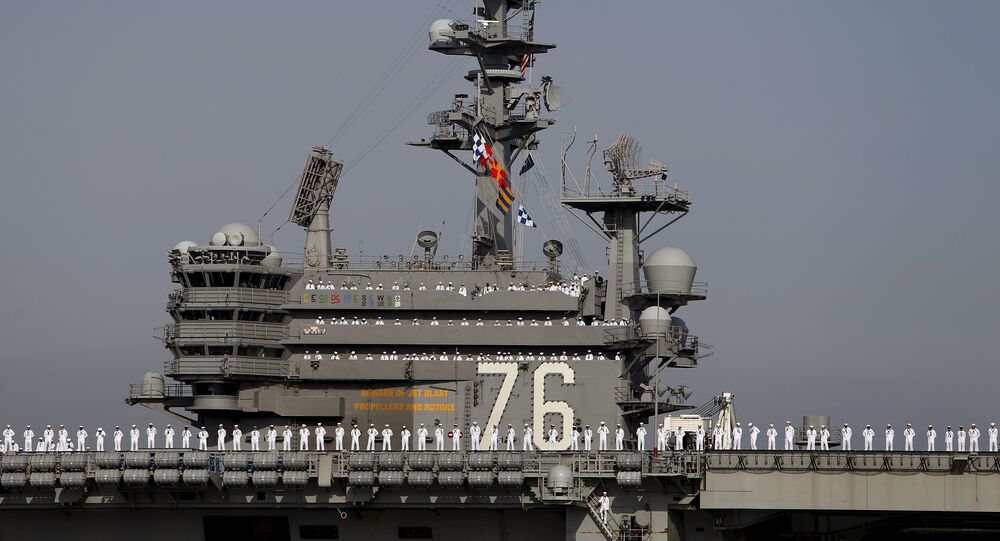 Russian journalist Sviatoslav Knyazev discusses the 'carry a big stick' approach entailed in Washington's use of its aircraft carriers, and how nations might effectively work to challenge US military hegemony.

Last month, Washington carried out a demonstration of military power using aircraft carriers unseen in years and perhaps decades, not even trying to hide the fact that it was looking to exert political and military pressure on Moscow and Beijing.

In June, the US Navy simultaneously put six of its aircraft carriers on combat duty, something the world has not witnessed since 2012. "That's in quantitative terms," Knyazev noted in his piece for PolitRussia. "Qualitatively, Washington was even bolder; this kind of activity by the US Navy in the world's oceans has not been observed since the 1990s," he added.

© AP Photo / Fabrizio Bensch/Pool
Russian MoD Urges US to Stop 'Dangerous' Activity After Incident With US Warship
In early June, the USS Harry Truman and the USS Dwight D. Eisenhower entered the Mediterranean Sea, with the explicit goal, 'accidentally' leaked to the press, of "checking the Russians" and "making them think twice" about US capabilities.

Then, photos released in mid-June showed the USS John C. Stennis, the USS Ronald Reagan, and their respective carrier strike groups (CSGs) sailing together in the Philippine Sea, a clear demonstration of US power to Beijing over the increasingly tense situation in the South China Sea. Meanwhile, the USS Carl Vinson and USS George Washington also left their bases for maneuvers.

​In addition to the carriers themselves, CSGs feature between 60-80 aircraft each, an air defense squadron (1-2 guided missile cruisers), an anti-ship squadron (3-4 destroyers), submarines, and supply vessels.

Commenting on the main message behind the impressive deployment, Knyazev wrote that it served as a reminder that the United States has big and powerful 'stick', "something obvious to everyone except the most desperate gung-ho types." Still, he pondered: "Just how powerful is the threat emanating from this 'big stick', and can it be effectively countered?"

© Sputnik / Igor Zarembo
Why USS Gravely's 'Show of Force' Didn't Impress Russian Navy
June's deployment, the journalist suggested, "was a demonstration in the best (or perhaps it would be more appropriate to say – the worst) traditions of the Cold War."

"A demonstration of the flag is just that, but how much do the US actions really change the balance of power in certain regions, and how much of a threat are they to those who they are trying to 'check'?"

For the record, Knyazev recalled, "a carrier fleet is considered the second most powerful military tool in international politics after nuclear weapons. Its potential effect on small states is immense. When it comes to other superpowers, things are a bit more difficult."

During the Cold War, "although the Soviet carrier fleet was inferior to its American counterparts in terms of strength, the Soviet Navy on the whole, by some indicators, not only reached parity, but achieved superiority over the USA. The USSR's powerful submarine fleet, combined with air and space forces, theoretically allowed for the destruction of entire CSGs belonging to the main potential enemy."

© REUTERS / U.S. Navy
US Marines to Deploy Amphibious Battle Group to South China Sea
Following the collapse of the Soviet Union and the decline of the Russian Navy in the 1990s, the journalist recalled that "it would be no big discovery for anyone that the turbulent 90s punched huge gaps in our country's defense capabilities." At the turn of the new millennium, the Russian submarine fleet suffered an 80-85% decline in capability compared to the Soviet sub fleet; the GLONASS satellite constellation was in poor shape. The Navy only had one aircraft carrier remaining, theoretically able to provide air reconnaissance away from Russia's shores.

"These were all serious problems; in the event of a confrontation between our cruisers, or even our aircraft cruiser, with a US CSG, the latter would have a much higher a chance for survival, specifically due to its superior detection capabilities. Our advantage would be in anti-ship missiles, but more on that later."

As for the Russian submarine fleet, Knyazev recalled that "the chances of them destroying ships in a CSG are significantly higher, but there is one problem: destroying a CSG requires the use of 5-10 subs simultaneously, while the US Navy could deploy six, seven or even more groups at once! The Tu-22M supersonic maritime strike bomber is also capable of sinking carrier groups, but on the open sea it would be very difficult to overcome the potential opponent's air defenses."

The most significant advantage Russia has is its precision weaponry, the journalist suggested. "The anti-ship missiles of any other country in the world, including the US, are substantially inferior to ours in both tactical and technical characteristics. On some indicators, the Americans have not yet caught up even with Soviet designs from the 1970s."

© AFP 2021 / BRENDAN SMIALOWSKI
NATO Buildup on Russian Borders is Like Cuban Missile Crisis, Only in Reverse
"But here too there is a caveat," Knyazev noted. "Recently, Russian designers have concentrated on the development of light anti-ship missiles. They are simple, cheap, practical, and capable of so-called swarming attacks. For a long time, they were thought to have a small effective range, but recently this idea was completely disproven in the eyes of the world" (specifically in the course of the Russian anti-terrorist operation in Syria).
Ministry of defence of the Russian Federation
Ships from Russia's Caspian Flotilla launching Kalibr-NK cruise missiles against Daesh targets in Syria. File photo

"However, in the case of action against a CSG, they still have one drawback: one missile hitting the target is not enough to completely destroy a modern carrier. Most of the heavy missile designs capable of single-handedly sending such a ship to the bottom of the ocean now remain in the Soviet past."

Subsequently, the analyst suggested, in order for Russia to achieve strategic balance, the effective development of light missiles must be complemented by contemporary heavy missiles as well. "It would also be necessary to restore the national system of space reconnaissance, to expand the carrier-based component of the Russian Navy (work in this direction is already underway), and to increase the strength of our submarine fleet."

Realistically, Knyazev noted, absent "a sudden mobilization" of the country's economy in favor of the armed forces and the defense industry, "we will not be able to achieve an advantage over the Americans on the open seas over the next decade." But this is does not amount to a critically dangerous security situation. "In the current military-political situation, we're not talking about ships dueling it out in the middle of the Atlantic or the Pacific. And foreign CSG operations in coastal areas protected by our armed forces are impossible."

© Flickr / Commander, U.S. Naval Forces Europe-Africa/U.S. 6th Fleet
Crowded Seas: Why US Warship 'Provoked' Russian Frigate in Mediterranean
"Russia has restored the system of radar early warning, allowing us to detect any hostile objects a good distance from the border. Hostile carrier air-based air power cannot fly up to our shores unnoticed, and would be discovered a considerable distance from the shore, making them a target both for strategic aircraft operating within the national air defense system (which by some estimates is the most advanced in the world), and by land-based anti-ship missiles."

Moreover, the journalist recalled, "the Chinese, whose situation is very similar to ours, have come up with their own creative way to protect their coasts from any potential overseas aggressor, coming up with the DF-21D, the world's first anti-ship ballistic missile (ASBM). US experts have argued over whether it is accurate enough to actually hit an aircraft carrier in the ocean, but the US Navy's sailors do not seem to have a desire to check in practice whether or not that is the case…"

© AFP 2021 / GREG BAKER
Military vehicles carrying DF-21D missiles are displayed in a military parade at Tiananmen Square in Beijing on September 3, 2015, marking the 70th anniversary of victory over Japan and the end of World War II

Ultimately, Knyazev noted, "generally, in recent years aircraft carriers have lost some of their influence as a means of global intimidation. But it is far too early to dismiss them entirely. For many decades to come, across local conflicts of varying intensity, and for the purposes of combatting terrorist groups and performing aerial reconnaissance in remote areas, aircraft carriers will remain a necessity."

"Therefore, Russia too will have to revive its own carrier fleet," the journalist concluded.

US Destroyer Tried to Repulse Russian Frigate From Carrier - Admiral