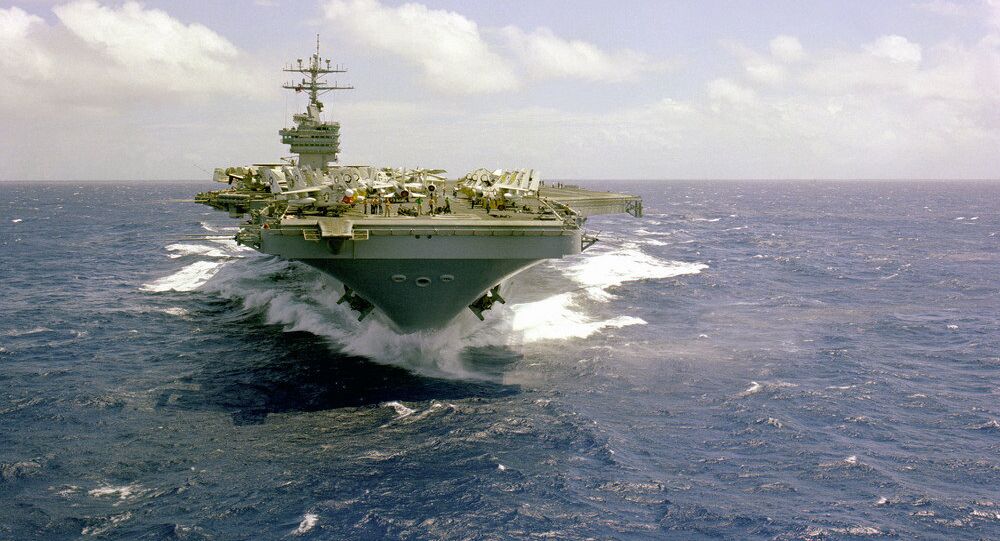 On June 1, the USS Dwight D. Eisenhower was sent from the US east coast to support the USS Harry Truman in the Mediterranean. On June 4, the USS Ronald Raegan was reportedly deployed from a naval base in Japan to the South China Sea. Two more flattops, the USS Carl Vinson and the USS George Washington, left their bases for training maneuvers.

© AP Photo / Fabrizio Bensch/Pool
US Navy Launches First Strike From the Med Since 2003, Targets Daesh
In addition, the seventh aircraft carrier, the USS George Bush, will be deployed in the near future for patrolling.

Aircraft carriers are the main offensive force with the US Navy. On average, a US aircraft carrier can carry 30-40 F/A-18 Hornet jet fighters. The aircraft has a combat range of 800 kilometers.

Commenting on the situation, a representative of the Navy underscored that the deployment of the aircraft carriers is not a response to any challenge.

"Usually, 50 percent of the US warships are on the sea. This is why the recent deployment of six of the total nine aircraft carriers is a routine practice. This is the strategy the US has used for a long time – maintaining naval presence across the world," Konstantin Sivkov, head of the Academy of Geopolitical Problems, told Svobodnaya Pressa.

The deployment of the USS Dwight D. Eisenhower to the Mediterranean Sea is bad news for Daesh terrorists. It will expand the US Air Force wing in the region to 120 planes.

As for the deployment of US flattops to the South China Sea, the move would increase tensions between Washington and Beijing, Sivkov said.

"US aircraft carriers are a powerful force. An aircraft carrier never operates in standalone mode. A US carrier group usually comprises one-two submarines and six-eight warships. In addition, the aircraft carrier has several dozens of jets. Such a force can spark tensions in any area of the world ocean," Maj. Gen. Vladimir Romanenko said.

© AP Photo / Fabrizio Bensch/Pool
US Carries Out 68 Anti-Daesh Sorties From Mediterranean Sea Since June 3
However, one or two US carrier groups cannot create a serious geopolitical risk, he added. The US may intensify airstrikes against Daesh or fuel tensions with China, but the global balance of power will not change.

The possible reason for the deployment of aircraft carriers is the upcoming presidential elections in the US. It may be the Democrats’ effort to strengthen their positions, Mikhail Alexandrov, a political analyst at the Moscow State Institute of International Relations, suggested.

"This is a demonstration of force and it doesn’t pose risks for Russia. Washington wants to send a message to the electorate to draw attention away from numerous flaws in the US foreign policy," military expert Ivan Konovalov told Sputnik Radio.

© Sputnik / Alexander Vilf
'They Said No': China Denies US Aircraft Carrier Entry to Hong Kong
Moreover, the US also wants to demonstrate its military force to its allies, Dmitry Ofitserov-Belsky, an expert in international affairs at the Russian Higher School of Economics, told Sputnik Radio.

"The fleet of aircraft carriers is a tool to project power. The US sends a signal to its allies that it’s ready to wage wars far from its borders. It is very important for Washington since there are doubts in US military power among allies," he pointed out.