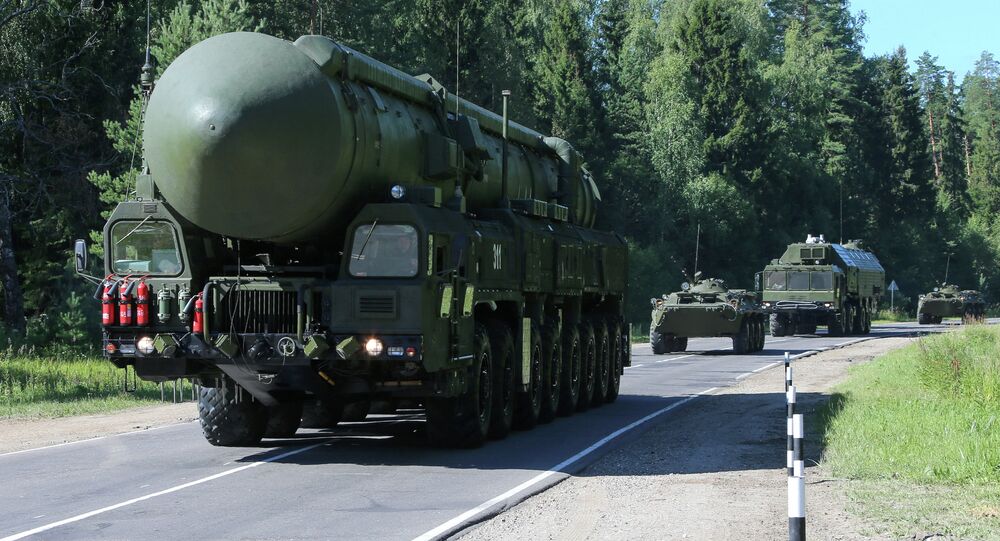 On the eve of his trip to Japan for next weekend's G-7 summit, President Barack Obama told Japanese broadcaster NHK that Moscow is to blame for stalling the process of global nuclear disarmament. Russian geopolitics experts Mikhail Alexandrov and Vyacheslav Tetekin explain why the president's remarks are particularly cynical and disingenuous.

When asked by NHK about global nuclear disarmament and the prospects for a world without nuclear weapons, Obama recalled that he'd "tried to negotiate with the Russians, and was able to get, when I first came into office, a START-II treaty that reduced the stockpiles of Russian and US nuclear weapons."

Presently, however, the situation has changed, and according to the president, Moscow is to blame. "I think we can go further but so far Russia has not shown its self interest in doing more," Obama complained.

© REUTERS / Andy Rain
'I Tried to Negotiate': Obama Claims Russia Not Interested in Further Nuclear Weapons Reduction
Commenting on Obama's remarks, independent Russian newspaper Svobodnaya Pressa pointed out that the Nobel Peace Prize winner has not only failed to live up to expectations that he would be a peacemaker, "but has made a significant contribution (in Afghanistan, Libya and Syria) in the expansion of the US track record as a 'world policeman'." Nevertheless, the paper noted, the president "calmly dons the mantle of peacemaker and tries to put Russia in a negative light" when it comes to issues of global nuclear security.

Speaking to the newspaper, Mikhail Alexandrov, a senior expert at the Center for Military-Political Studies at the Moscow State Institute of International Relations, suggested that the president was being openly deceptive and disingenuous.

The military analyst recalled that all throughout the Cold War, when the Soviet Union had the advantage in conventional forces, "Washington clung to nuclear weapons as firmly as possible, increasing their arsenal, and developing new delivery vehicles."

"In accordance with NATO's doctrine of flexible response, which was in force until the late 1980s, the alliance was to use nuclear weapons in response to a Soviet offensive in Europe, gradually increasing the level of escalation. Initially they would strike Soviet spearhead units, and then the second tier, and finally strategic objectives inside the Soviet Union. During the Cold War, Moscow repeatedly proposed universal nuclear disarmament, but each time it was rebuffed."

Today, Alexandrov noted, "following the collapse of the Soviet Union and the dissolution of the Warsaw Pact, Russia's military forces trail behind the cumulative forces of the NATO countries. As soon as the Atlantic Alliance achieved superiority in conventional weapons (by approximately 3-4 times), Western generals and politicians immediately started talking about universal nuclear disarmament. Now the situation is a mirror image" to that which existed during the Cold War. "Today, the possession of nuclear weapons is a guarantee of Russia's security."

© CC0 / NNSA / Nevada Site Office / The BADGER explosion
Pentagon-Linked Think Tank Pushes Preemptive Strike on Russia, Robot Missile Defense
At the same time, the analyst warned, the US and NATO have not only been consciously raising their conventional potential in Eastern Europe, but also looking to improve their nuclear capabilities.

"Europe had and continues to have a series of storage facilities for [US] nuclear bombs (in the UK, Germany and Italy, and similar stores in Turkey). We are talking about 400 tactical nuclear warheads. To be fair, traditional nuclear bombs are not very effective today; NATO would first have to break through our air defenses, which have demonstrated serious successes in recent years."

"Therefore, the Americans are placing elements of their missile defense system in close proximity to Russia. Most recently, the US opened their 'anti-missile' defense base near the Romanian town of Deveselu. Here they've already delivered 24 Standard-3 missiles, but it is well-known that their universal Mark-41 launchers can be reloaded with Tomahawk nuclear-armed cruise missiles. And these are no longer defensive but offensive weapons. Furthermore, cruise missiles are the most effective way to break through air defenses. A similar base is planned for deployment in Poland in the coming years."

Asked by the online paper whether the US moves are an indication that the strategic nuclear balance is under threat, and whether Russia should consider abandoning the START 3 Treaty when it expires in 2021, Alexandrov emphasized that there is no need to panic, and that "it's not at all inevitable for events to develop along these lines."

"In recent years, the arsenal of our strategic nuclear forces has been complemented by the solid-fuel mobile and silo-based RS-24 Yars (equipped with multiple warheads), as well as the Bulava sea-launched missile. It is expected that the two-stage liquid-fuelled Sarmat ICBM will enter active combat duty in the coming years, as will the rail-based Barguzin system."

"Therefore, there is no threat to nuclear parity. Moreover, the US missile defense system is not at a level of development where it could upset the balance of forces and threaten Russia's security."

Still, Alexandrov noted that he "could not exclude that such a threat may come about in the future. So we have to watch closely what the Americans are doing and to have the capability to build up our nuclear forces if necessary. As soon as our military receives evidence that the US is close to having systems capable of intercepting Russian ICBMs, then, it would be necessary to leave START-3 and increase our strategic nuclear forces in both quantitative and qualitative terms."

© Photo : defenceforumindia.com
Future Technology to Neutralize US Space-Based Weapons Systems – Global Peace Activist
For his part, Vyacheslav Tetekin, a member of the Russian parliament's Defense Committee, told the newspaper that in all fairness, President Obama's proposals sound like open mockery. Recalling the US propensity for foreign interventions, Tetekin pointed to the "textbook example of Iraq, where the Americans invaded in search of weapons of mass destruction which did not exist," and where "the battle for democracy resulted in one million dead Iraqis. After this, their offer to their opponents to voluntarily disarm sounds like mockery."

"Any disarmament initiatives launched by US hawks pretending to be 'doves of peace' serve merely as an instrument to weaken their opponents," the lawmaker noted. "The Pentagon is making every effort to deploy its missile defense system and upgrade its nuclear weapons; meanwhile they propose that Russia stop. Everyone knows how the US reduces their strategic forces; they simply remove the warheads from the missiles and store them at their bases. It's obvious that if necessary, these can be snapped back together and deployed."

Ultimately, Tetekin emphasized that given developments in the deployment of US conventional forces, missile defense, and non-nuclear ballistic and cruise missile capabilities (including the Pentagon's so-called Prompt Global Strike initiative), Washington's strategic adversaries cannot afford to give in to empty rhetoric about nuclear disarmament, especially Russia.

Why Obama Accused Russia of Showing No Interest in Nuke Reduction